Following the bomb cyclone, cold air has blasted the Northeast. How much longer will it last?

The storm left hundreds of thousands without power across the Northeast and impacts are expected to continue through Thursday.

Gusty winds are ushering in some of the coldest air yet this season across the northeastern United States, but how long will these conditions last?

The lower temperatures are being funneled into the region behind a 'meteorological bomb' that brought flooding rainfall, damaging winds and pounding seas at midweek.

While the heaviest rainfall has already fallen from the storm, showers are forecast to linger over northern New England through Friday morning. Some of the higher terrain can continue to receive some wet snowflakes as well. 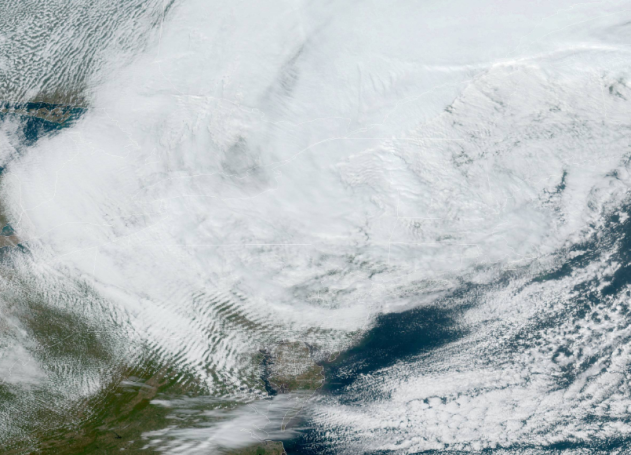 This image, taken on Thursday afternoon, Oct. 17, 2019, shows a large shield of clouds still obscuring much of the northeastern United States from the recent bomb cyclone. (NOAA/GOES-East)

Crews working to restore power or cleaning up debris left behind by the storm will face chilly, blustery weather into Friday.

The strongest winds have ended across the central Appalachians and lower mid-Atlantic, but winds can remain locally gusty across portions of New York state and New England at the end of the week, causing some tree limbs to break and fallen leaves to blow through neighborhoods.

The winds will create low AccuWeather RealFeel® Temperatures, in the 20s and 30s F across the interior and near 40 closer to the coast, for those heading out on Friday morning. 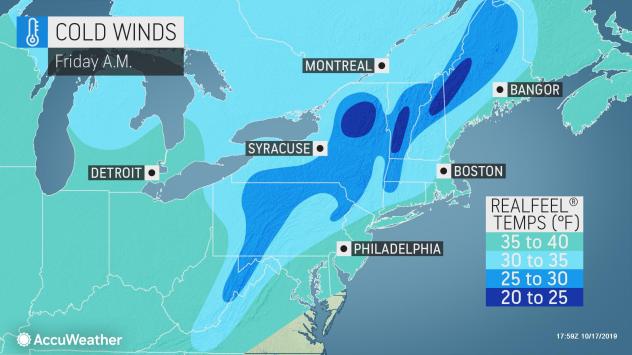 After the chilly morning, increasing amounts of sunshine and lightening winds will help it to feel less harsh than Thursday.

Friday's highs will still be 5-10 degrees below normal over the interior, generally in the 40s and 50s. 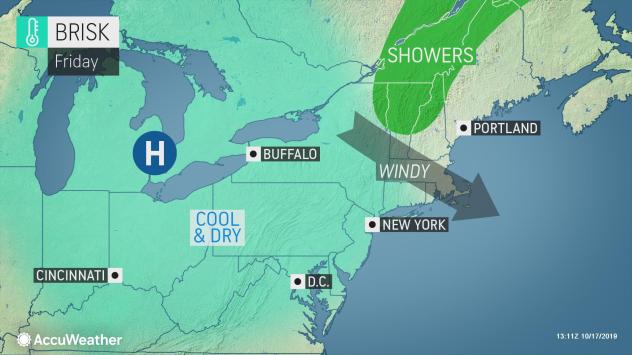 Those heading to Game 5 of the ALCS in the Big Apple on Friday evening can expect temperatures in the lower 50s at the start of the game, falling into the upper 40s by the end. AccuWeather RealFeel® Temperatures will be in the middle 40s throughout the game.

The clear skies and light winds will allow temperatures to plummet on Friday night.

A frost can occur in locations that have avoided a growing season ending event in parts of the mid-Atlantic and central New England, according to AccuWeather Senior Meteorologist Alex Sosnowski.

"A few locations may equal or dip slightly lower than their lowest point so far this season in terms of actual temperature by Saturday morning," Sosnowski said. "That mark is 34 F in Pittsburgh, 42 in Boston, 45 in New York City, 46 in Philadelphia and 49 in Washington, D.C." 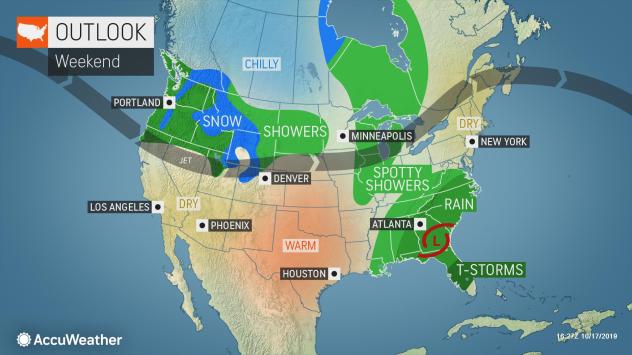 Those heading out on Saturday morning to run errands, walk the dog or tailgate ahead of college football games will want to dress in layers. While the morning hours will start out chilly, temperatures will rebound nicely during the afternoon amid dry conditions.

"Temperatures are forecast to rebound for several days this weekend and into next week before much colder air sweeps in prior to the end of October," Sosnowski said.

Saturday's highs will be in the 50s and 60s, with daytime temperatures likely to climb a few degrees more on Sunday.

While dry weather is likely to hang on for much of the region over the weekend, which is great news for those leaf peeping or heading to fall festivals, there can be a brief period of rain that sweeps through the lower mid-Atlantic from Saturday night into Sunday.

This wet weather will be associated with Potential Tropical Cyclone 16, which is expected to make landfall in the Florida Panhandle on Saturday morning.

The Orionids, one of the ‘top 5 meteor showers of the year,’ will peak early next week November to feature rare astronomical event that won’t occur again until 2032 Man who was nearly killed by lightning strike reaches important milestone Potential Tropical Cyclone 16 forms in Gulf of Mexico and may strengthen further