A potent storm will bring blustery rounds of rain and mountain snow to the Pacific Northwest through the end of the week.

Over the last week, the on-and-off-again storm pattern across the Northwest that has produced bouts of light showery weather is about to change gears.

Forecasters say that a more turbulent storm will swing in from the Pacific by midweek and deliver blustery rounds of rainfall. The storm will not halt at the coast, as it is expected to push through the northern Cascades and Rockies and spread periods of rain and higher-elevation snowfall through the end of this week.

"A pronounced dip in the jet stream and the storm will enter the Northwest on Wednesday then become progressively deeper into the northern and central Rockies Thursday into Friday," AccuWeather Senior Meteorologist Matt Rinde explained.

The upper levels of the atmosphere are influencing the potent storm. From the middle to the latter portion of this week, the dip in the jet stream over the Western states will result in cooler air spilling into the region from Canada.

Temperatures early this week will range from near normal to slightly above average but are expected to fall between 15 and 20 degrees Fahrenheit as chilly air settles over the region on Wednesday and Thursday. This noticeable shift will leave many people across the region experiencing temperatures much lower than typical for this time of year, including those in cities such as Boise, Idaho, and Bozeman, Montana. 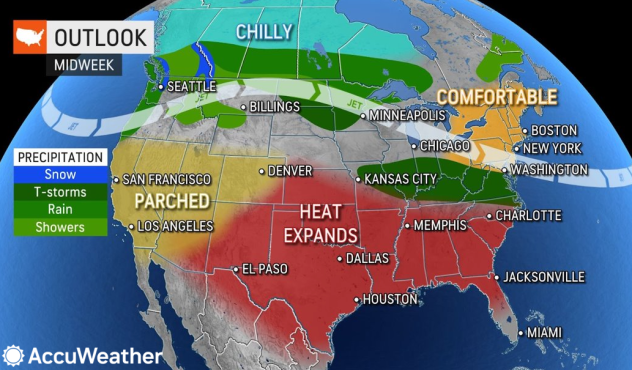 On Sunday, cities such as Boise observed a daytime high of 85 F, the highest temperatures have risen in the city since Oct. 4, 2021. On Thursday, the maximum temperature is forecast to be only 56 F.

Similarly, residents in Bozeman recorded a high of 71 F on Sunday and will dramatically fall to 49 F on Thursday.

As the storm shifts inland over the higher terrain, a return of winter weather is in store for some locations.

"Snow will develop in the Cascade Mountains in Washington and Oregon and shift into the Idaho Rockies on Wednesday into Thursday. On Friday, this storm will progress as far south as the Colorado Rockies," stated Rinde. 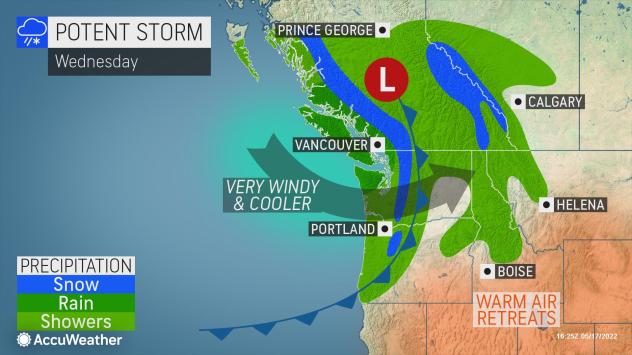 Snow levels could drop in the Cascades to near 3,500 feet by Wednesday night. Passes above elevations of 4,000 feet, such as Stevens Pass on U.S. Route 2 and White Pass on U.S. Route 12 in Washintgon, could potentially face travel issues from Wednesday into Thursday as the first leg of the storm drops several inches of snow in the mountains.

"For most areas, snow is increasingly rare for the month of May, but the exception to that is in the Western mountains," stated Rinde.

For many U.S. residents, hearing snow in the forecast in the middle of May might sound like a foreign word. However, late-season snowfall across the high terrain is not entirely out of the ordinary throughout the Cascades and the Rocky Mountains in May. In the past, higher elevation spots in the northern Cascades observe one or two snow days on average throughout May.

In addition to the threat of rain and mountain snow entering the Northwest, the incoming storm will produce pockets of gusty winds later this week. In the strongest gusts, winds can reach upwards of 35-45 mph along the coast on Wednesday before filtering eastward on Thursday and Friday.

Forecasters say that wind gusts throughout the Rocky Mountains from Montana to Colorado can reach upwards of 60 mph from Thursday to Thursday night. 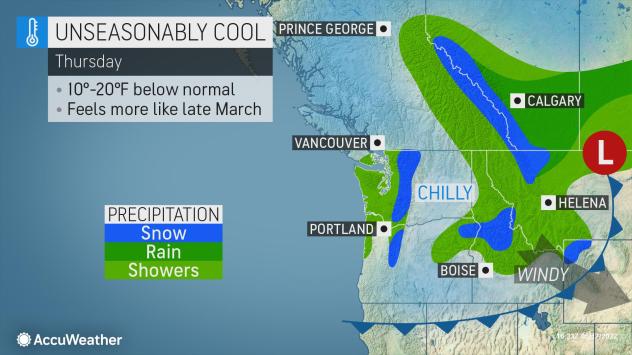 From mid- to late week, AccuWeather RealFeel® Temperatures might feel 5 to 10 degrees lower than the observed values. Combined with the temperature decline from Wednesday to Thursday, conditions will feel noticeably out of season.

By Thursday, the storm's center is expected to emerge from the Rocky Mountains and transition across the Plains, leading the way with rounds of rain. However, wintry impacts from the storm ranging from heavy snow to a 50-degree temperature drop will sweep across the central Rockies and Colorado on Friday and Friday night.

Into the weekend, meteorologists say that a line of rain and even thunderstorms will likely develop across the Eastern U.S. as the storm and its associated cold front trails shifts east. As the week progresses, continue to check back and monitor for developments as AccuWeather meteorologists closely monitor the potential for stormy conditions.