Interstate 405 was virtually empty on March 21 after California was effectively shut down in an attempt to slow the spread of the coronavirus.

Following a drier than normal start to March for much of the Pacific Northwest, stormy weather was resuming across the region this week.

"A series of weak storms are expected to push onshore and move through the Pacific Northwest through the middle of the week," said AccuWeather Senior Meteorologist Alan Reppert. 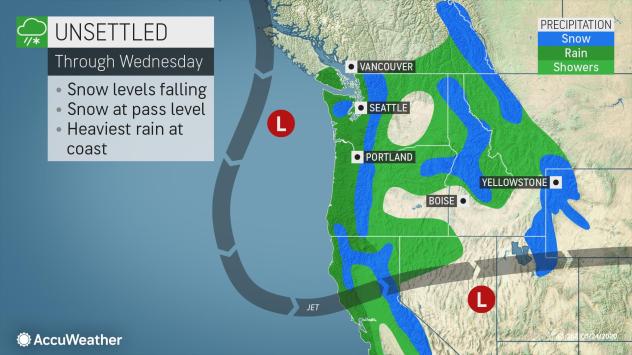 The increased stormy weather got underway on Monday, as the first storm brought rain to the coastal region and dumped snow across the Cascades and the higher elevations of the northern Rockies.

Unsettled weather will persist through Wednesday, as snow levels continue to drop farther than in recent days.

As the core of the cold air overhead centers over the Northwest into Wednesday, snow levels have dropped to around 2,000 feet in some spots.

With wintry weather continuing, many of the passes in Washington and Oregon could have a few inches of snow before things are said and done by Thursday.

Precipitation near the coast and in the valleys will be mainly in the form of rain, which could be beneficial for many of these locations.

Some of the major cities in the Pacific Northwest had a wetter-than-normal January and some were even wetter than normal in February, especially in Washington. However, March has been a different story.

As of March 23, cities including Portland, Oregon, and Seattle and Spokane, Washington, have only recorded 35, 40 and 34% of their respective normal rainfall for the month. It has been even drier farther south along Interstate 5. The cities of Salem, Eugene and Medford, Oregon, have only had 34, 25 and 21%, respectively, of their normal March rainfall amounts in the same timeframe.

The dryness spilling over from the winter in many of these locations has left a drought across central Washington, as well as most of Oregon and Northern California, according to the U.S. Drought Monitor. 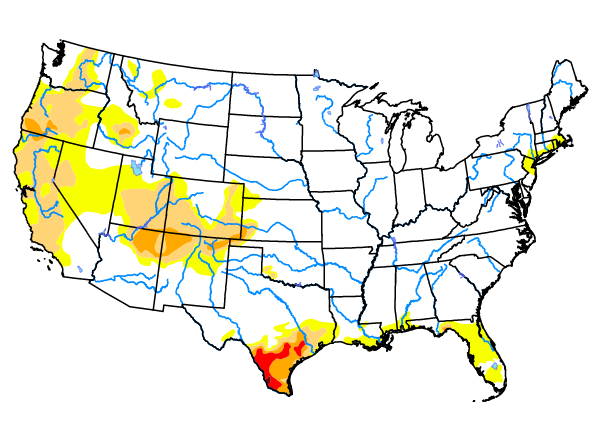 Data collected by the U.S. Drought Monitor as of March 19 shows drought conditions across much of the West. The bright yellow coloring indicates "abnormally dry", while the ten and orange signify moderate and severe droughts, respectively.

Most of the locations in the Pacific Northwest experiencing drought have seen little rainfall since the last update from the drought monitor on March 19.

Much like California needing a 'Miracle March' to alleviate drought and help to delay the onset of the upcoming wildfire season, the dry areas of the Pacific Northwest may be facing the same fate.