During the first few days of spring, a heat wave will make it feel more like summer for much of the western United States.

Heat more typical of the peak of summer will scorch much of the western United States this week and send temperatures to record-challenging levels during the first days of spring, AccuWeather forecasters say.

The heat wave could even set daily records in major cities in California such as Los Angeles, San Jose and San Francisco, as well as parts of Nevada and Oregon. Even where temperatures won't quite flirt with records, they will still be well above average.

The heat will peak after temperatures in many places spent most of March around or below average, most noticeably Downtown Los Angeles, which was slightly below average for the month. 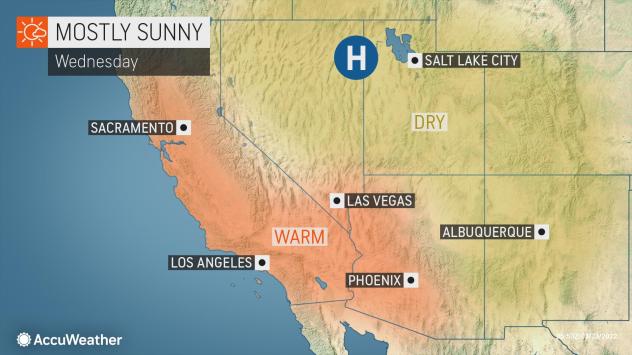 Above-average warmth began for many places near the Pacific coast, particularly across California, on Monday afternoon. Temperatures in downtown Los Angeles reached the 70s Fahrenheit, which is above the average of around 70 F this time of year. Temperatures in Palm Springs, California, rose into the mid- to upper 80s despite having an average in the lower 80s for late March. In Stockton, California, the afternoon temperature tied the daily record of 80 F set in 1960.

This is just the beginning, however, as temperatures are likely to soar higher as the week continues. Tuesday, according to the National Weather Service, daily records for March 22 were broken in the California cities of Camarillo (90 F) and Oxnard (89 F), both beating previous marks set on March 22, 2008. Other daily high records were set in California cities Santa Barbara (84 F) and Paso Robles (84 F), beating out previous records set in 2013 and 1977, respectively.

Los Angeles residents will experience another day of record-challenging heat on Wednesday as the temperature climbs into the upper 80s and challenges the record of 88 F from 2008. Farther north, the state capital of Sacramento will likely topple its record of 80 set in 1984. 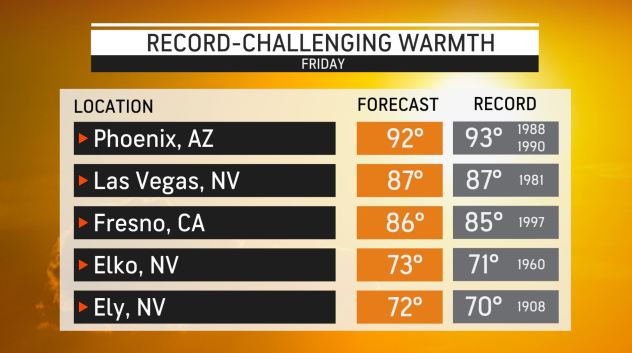 "Wednesday and Thursday are the days most likely to reach record highs before the upper-level, high-pressure area weakens toward the end of the week," Zehr said.

Merced, California, located about 112 miles southeast of San Francisco, is expected to easily break the record of 79 F from 2014 on Wednesday as AccuWeather forecasters predict the mercury to rise into the upper 80s there. Near-record warmth is also expected to impact areas farther north on Wednesday, such as Klamath Falls, Oregon, situated not far from the California border, where the temperature is expected to nearly reach the record of 73 F from 1960.

Not only will Wednesday afternoon be downright hot in some locations, but nighttime temperatures will also be fairly high as well. Typically, lows drop into the lower 50s in Los Angeles in March; however, temperatures are forecast to fall only into the lower 60s at night instead.

Temperatures will reach the mid-80s on Thursday in Los Angeles, which is about 10 degrees above average for this time of year, but just shy of record-challenging levels. The core of the heat is expected to shift into interior Southern California and western Arizona on Thursday, popping temperatures around Palm Springs and Yuma, Arizona, into the 90s to end out the week.

Thursday night will be another warm one across the Southwest, with temperatures in the lower to middle 60s once again. 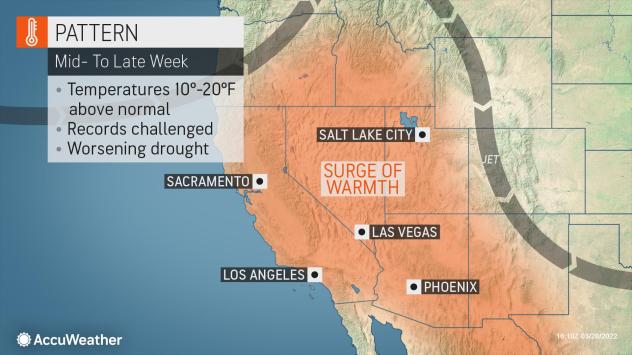 By Friday, temperatures are anticipated to be in the 90s from Palm Springs to Phoenix. The National Weather Service (NWS) office in Phoenix is already beginning to highlight the risk for extreme temperatures Wednesday through Saturday.

Palm Springs is forecast to approach its record of 97 F from 1988 on Friday, while Phoenix will challenge its record of 93 from 1990. Cities as far north as Redding could have temperatures in the lower 80s, just a degree or so shy of the record of 83 set in 1988.

On Saturday, record-challenging temperatures are likely across interior portions of the West from Reno to Pocatello, Idaho, to areas south near Tucson, Arizona. After snowflakes flew last Sunday in Pocatello, located in southeastern Idaho, the city will have an opportunity to record temperatures in the upper 60s this Saturday, challenging the high of 69 F set in 2007.

While extreme warmth and dry weather may be enjoyable for those welcoming spring with open arms, they can also accentuate the current drought conditions across the West. Over 30% of the West is in extreme drought as of Tuesday morning, according to the United States Drought Monitor.

Los Angeles is at 4% of average precipitation for both the month of March and the year so far, while Palm Springs hasn't received more than a trace of rain this month, leaving it at 0% of average. Sacramento has also reported only 3% of average since the beginning of the year, and San Francisco is only doing slightly better with 7% of normal.

Forecasters say some relief is on the way to the Southwest, but residents shouldn't get their hopes up for immense amounts of rainfall.

"While it will be warm and dry across most of the Southwest this week, there remains a chance for some rain early next week across Southern California next Sunday and then for the rest of the Desert Southwest next Monday," said AccuWeather Senior Meteorologist Michael LeSeney.