AccuWeather meteorologists say that winds high in the atmosphere could carry smoke from dozens of large wildfires burning in the West hundreds or thousands of miles east this week into the northern Plains, Midwest and potentially the Northeast.

According to the National Interagency Fire Center, there were 93 large wildfires and fire complexes burning across the West as of Sept. 13. Most of the fires were located in Idaho, Montana and the Northwest region and had scorched more than 800,000 acres. 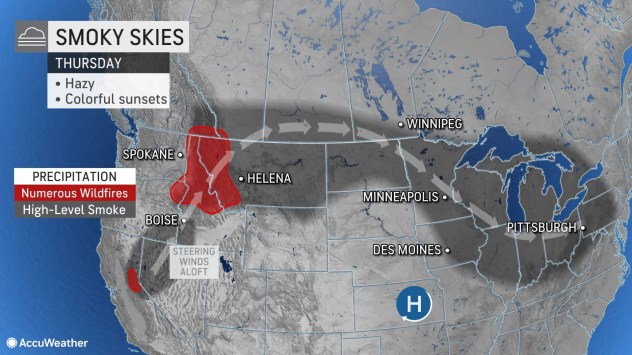 The smoke is expected to be the most pronounced across the north-central United States on Wednesday and Thursday, where tranquil weather is forecast.

"Smoke from a number of wildfires located in the Northwest is forecast to spread into the Great Lakes region on Wednesday and potentially even into the Northeast and mid-Atlantic by Thursday," said AccuWeather Meteorologist Adam Sadvary.

The air quality on Wednesday was noted as "average" around Chicago and Minneapolis on Wednesday according to Plume Labs, a company acquired by AccuWeather earlier this year.

Besides the haze, the sun may look different from normal.

"Colors throughout the sky will be more vivid when the sun is closer to the horizon in the morning and in the evening," explained Sadvary, who is also an expert on sunrises and sunsets.

"The smoke particles are able to scatter more of the sun's radiation, bouncing blue-wavelength light back toward space and letting more red-wavelength light through the atmosphere," Sadvary said, adding that this process is known as Rayleigh scattering. 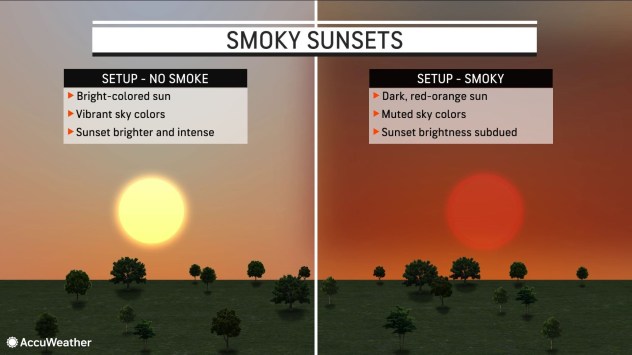 The smoke high in the atmosphere will not enhance sunrises and sunsets in all locations, however.

"Where smoke is exceptionally thick, the sun may largely be blocked out," noted Sadvary.

Some locations across the Dakotas and Minnesota are likely to have rain and thunderstorms on Thursday. The clouds associated with the rain will make any high-level smoke unnoticeable. 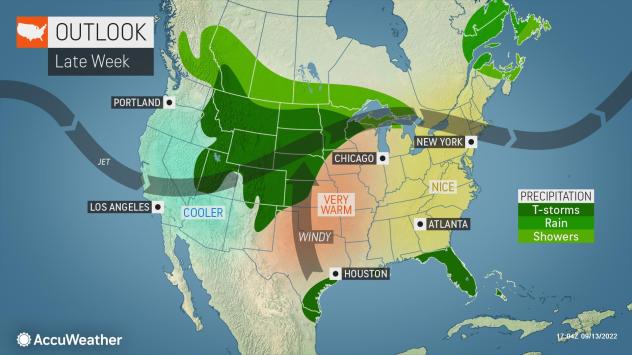 Although smoke is normally very high above the surface as distance from a wildfire increases, this is not necessarily always the case.

"Smoke particles sometimes mix down to the surface and lead to unhealthy air quality, especially for those with preexisting health conditions," said Sadvary.

Hazy skies and colorful sunsets from wildfires in the West may sound familiar to residents of the Midwest and East. Just last year, a similar scenario unfolded in July and August of 2021. In that instance, smoke was carried for thousands of miles. This was due to the Dixie Fire, which burned more than 963,000 acres in California, as well as other fires in the West. 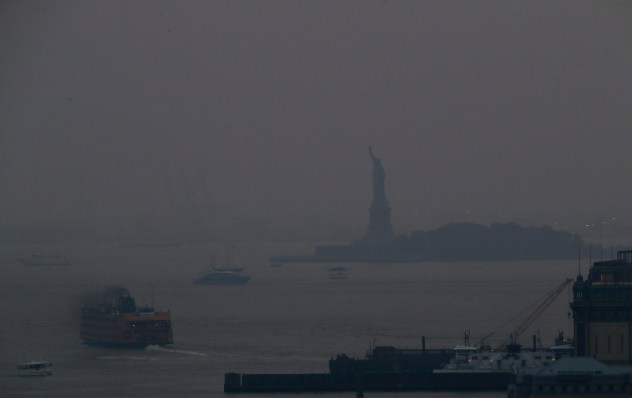 The Staten Island Ferry departs from the Manhattan terminal through a haze of smoke with the Statue of Liberty barely visible, Tuesday, July 20, 2021, in New York. (AP Photo/Julie Jacobson)

"The Dixie Fire torched an area larger than the state of Rhode Island, and the smoke plume managed to cross the Atlantic Ocean and reach portions of western Europe," noted Sadvary.

It is unlikely that the smoke will get that far this year, but residents in portions of the Central and Eastern states may get to see something that happens only once a year or less.