2020 has started on a warm note for the eastern two-thirds of the nation, and temperatures are about to throttle up even more. Both daytime highs and nighttime lows are projected to flirt with record levels from the south-central to the eastern United States during what is typically the coldest part of the year.

The surge of warm air that will envelop the eastern portion of the nation will act like a winter "heat wave" and help to lower heating bills at a time when millions of Americans typically take a hit to the wallet keeping homes warm. 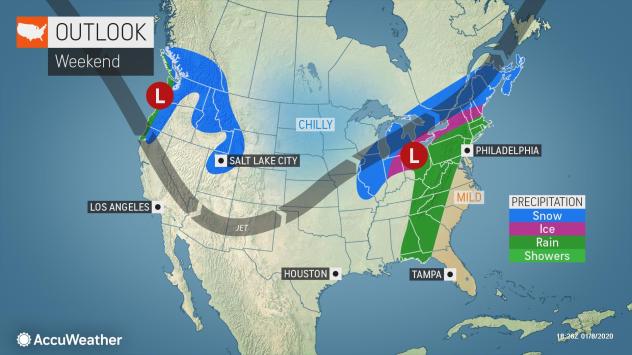 The warm air will be pumped up around the counterclockwise circulation around an approaching storm, which is likely to unleash severe thunderstorms and flooding rain to part of the Mississippi Valley. Warmth will be drawn up from the Gulf of Mexico and the tropical Atlantic Ocean -- winter thaws are often triggered ahead of weather systems in this manner.

The circulation around the storm will generate strong winds with the warmth. Where heavy rain falls and saturates the soil with the gusty winds, trees can topple over and lead to sporadic power outages. The strong winds can also lead to airline delays and flight turbulence.

Record-challenging warmth will grip areas from the Gulf Coast to the Midwest and Ohio Valley on Friday. Daytime temperatures on Friday are forecast to climb well into the 50s and 60s F as far north as Illinois, Indiana, Ohio and southern Michigan. Temperatures will flirt with 70 over Tennessee and could approach 80 in southern portions of Louisiana, Mississippi and Alabama. 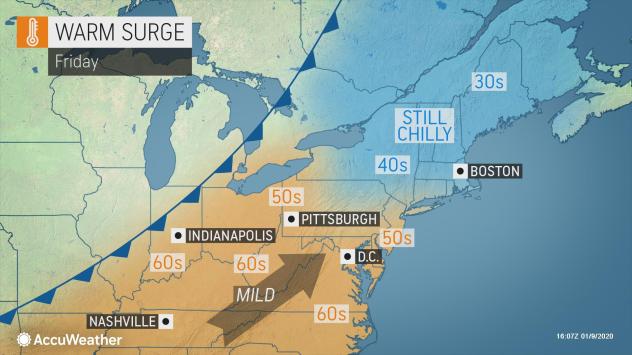 New Orleans is expected to record a high in the upper 70s on Friday when the record high is 81 set in 1974.

"Exactly how warm it will become during the day will depend on the amount of rain versus cloud cover and dry weather," Brett Anderson, AccuWeather senior meteorologist, said.

The sun angle is low this time of the year, but sunshine still has a warming effect during the daytime when Arctic air is not advancing.

"Even where the sun will not shine and rain will fall, it will still feel incredibly warm for January," AccuWeather Senior Meteorologist Eric Leister said.

Temperatures are likely to remain very mild Friday night ahead of a cold front that will sweep through the Mississippi Valley on Saturday.

Nashville could set a record high on Saturday first thing in the morning. The record of 72 dates back to 1890.

However, behind that front, high temperatures are likely to be slashed by 15 to 30 degrees from from west to east across the Central states spanning Friday and Saturday.

The core of April-like warmth will shift eastward over the weekend. Temperatures are forecast to approach record levels in the Northeast and could hit 70 or higher in Washington, D.C., could climb into the 60s in New York City and could reach 60 in Boston on Saturday. In the Southeast, highs are forecast to be in the 70s to near 80.

All told, more than 100 locations could have daily temperature records challenged by the unseasonable warm spell. 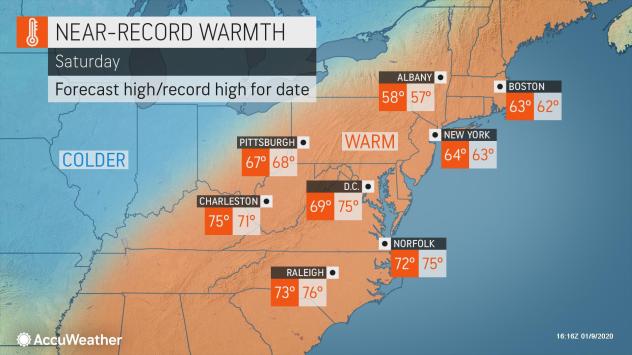 Similar to Friday night in areas west of the Appalachians, Saturday night is likely to be amazingly warm in the East. Temperatures may dip only a few degrees from the daytime hours as a stiff southerly breeze continues to pump warm air northward.

The warmth will follow chilly weather and snow squalls in the Northeast around midweek, and that is likely to make the weekend warmup feel even more dramatic.

"Thursday, Jan. 9, was the first day with below-average temperatures in much of the Northeast since Dec. 21," AccuWeather Senior Meteorologist Tom Kines said.

The warmth will be squeezed to the Atlantic and eastern Gulf Coast on Sunday. Highs for the day are most likely to occur during the morning. Temperatures are likely to fall back at least a few degrees during Sunday afternoon as the cold front progresses eastward, although the temperature drop will be less remarkable than it will be for areas west of the Appalachians.

The air that will sweep in and trim back temperatures across the Central and Eastern states will be of Pacific origin and not the Arctic, so any cooling will be limited.

The overall lack of Arctic air will continue over much of the U.S. next week as the polar vortex is forecast to remain strong and keep the coldest air locked up near the Arctic Circle. 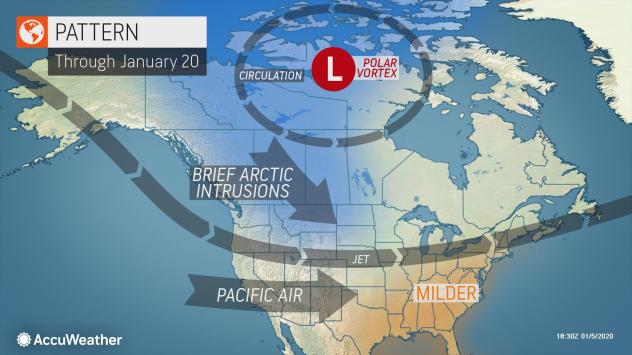