Firefighters reported on July 28 the Hog Fire destroyed two structures and burned more than 9,500 acres. Nearly 70 percent of the fire is contained.

After several days of temperatures in the 90s over interior portions of the Pacific Northwest, meteorologists say that the highest temperatures are yet to come.

As the jet stream lifts farther north and high pressure builds over the West, high temperatures are forecast to be over 100 degrees in some locations through the end of the weekend. Temperatures that high are likely to challenge records in several cities. 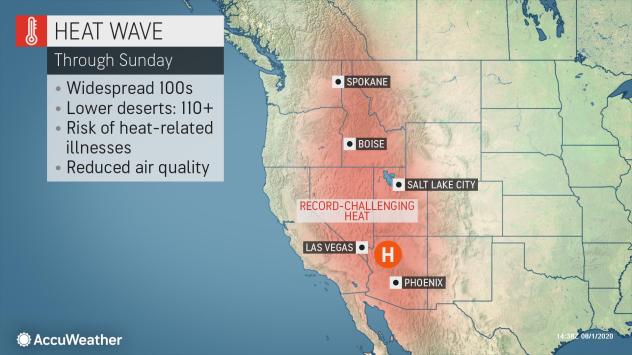 On Thursday, several locations challenged, or even surpassed previous record-high temperatures. Boise, Idaho reached 105 degrees on Thursday, falling just short of the record of 106 set back in 2006. Pendleton, Oregon, managed to break a nearly 90 year-old record from 1929 when the mercury hit 109 on Thursday.

Records continued to fall on Friday across the West. Baker, Oregon, soared to 105 degrees and shattered the old daily record of 100 set in 1959. Friday, the mercury in Omak, Washington, topped out at 107 degrees and eclipsed the previous record of 105 degrees that stood for 95 years. 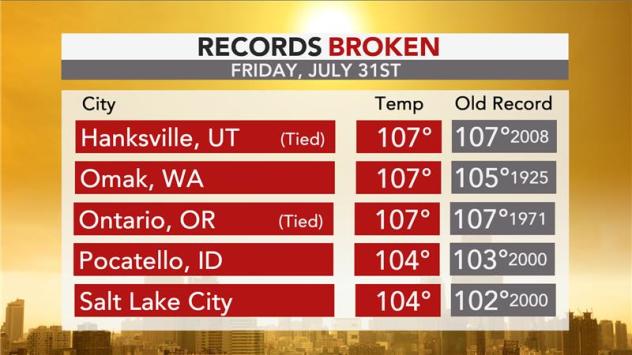 During the day on Saturday, Salt Lake City, Utah managed to set another daily high temperature record, topping out at 105 degrees. Similarly, temperatures in Ogden and Provo, Utah climbed above the century mark Saturday as the calendar flipped into August.

While caution is always advised in hot weather, temperatures in the 100s are not common in the Northwest, and will make it even more difficult for people to adapt.

"Anyone with outdoor plans such as going for a run or walking their dog should try to do so early in the morning or late in the evening toward sunset to avoid peak heating hours during the middle of the day," AccuWeather Senior Meteorologist Dan Pydynowski advised.

Since high pressure helps to promote sinking air, it is difficult for clouds to build. With few if any clouds, rain will not fall. Unfortunately, dry weather is not what the region needs.

"Much of Northern California, Oregon and eastern Washington is already under a moderate to severe drought and the upcoming weather pattern does not look to bring any relief as a large dome of high pressure will keep much of the Northwest dry into next week," said Pydynowski. "Any rain chances will likely remain confined to mainly western Washington into early week," he added. 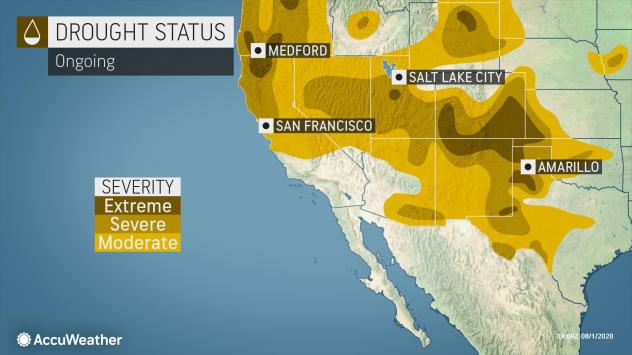 The drought has been building for quite some time. This caused some fireworks displays to be canceled back on July Fourth, and burn bans have been implemented in some locations.

"The dry weather has led to a burn ban in many areas," said Pydynowski. "Even in areas without a burn ban, anyone doing outdoor activities this weekend such as camping or grilling should avoid having open fires given how dry the vegetation is across the region."

Heading into the second half of the weekend, slightly lower temperatures will occur in the Northwest as the high pressure weakens slightly. However, highs in the 90s will still be common and locations such as Boise will likely still be near 100. In most areas, these temperatures will fall short of records.

A more significant lowering of temperatures is expected by early week thanks to a dip in the jet stream, with temperatures likely near or even slightly below normal.