Scott Denison was watching storms move through Thomasboro, Illinois, on July 20, when a powerful lightning bolt struck nearby, startling him in the process.

Record high temperatures will continue to be challenged across the Middle East this week as blistering heat and dry conditions remain over the region.

Extreme heat was felt across the Middle East with temperatures in the upper 40s C (115-120 F) across the region on Monday and many areas reaching above 50 C (122 F) on Tuesday. 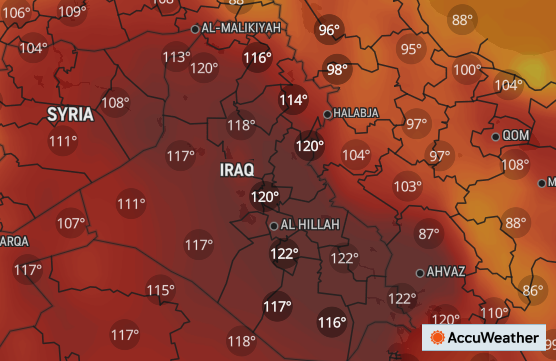 The week got off to a blazing start in Baghdad, Iraq, with a temperature reading of 50.6 C (123.1 F) on Monday. But on Tuesday, the temperature climbed even higher. According to reports from the area, the temperature reached 51.7 C (125 F) in the afternoon, surpassing the all-time record high temperature of 51.2 C (124 F) for the city.

Scorching high temperatures are forecast to continue this week as an area of high pressure remains overhead, allowing dry conditions and plenty of sunshine to bake the region.

Baghdad once again challenged its highest recorded temperature on Wednesday afternoon, but the temperature fell just short of the record, reaching 51 C (124 F).

The ancient city's origins date back to the 700s when it served as one of the most significant cultural centers for Arab and Islamic civilizations for centuries, according to Encyclopedia Britannica. Currently more than 7.6 million people reside in the Iraqi capital. For comparison, about 8.3 million reside in New York City.

In recent days, Baghdad has been rocked by protests, according to The Associated Press, and tensions escalated with security forces killing two demonstrators on Sunday. Electricity shortages have been one of the top issues protesters have been demonstrating against, and something that's been magnified by the record heat that's set in.

While eastern Iraq will be home to the highest temperatures on Wednesday, with widespread measurements of 49 C (120 F) and above expected, readings above 38 C (100 F) will be common across Syria, Jordan, Saudi Arabia, Oman and parts of Iran. 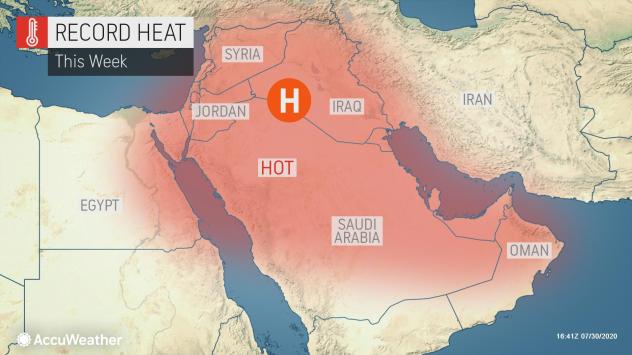 Overall, Thursday turned out to be the hottest of the stretch of heat despite no records being broken.

The core of the heat of once again located over eastern Iraq as well as Kuwait. Afternoon temperatures of 53 C (127.4 F) and 52.8 C (127 F)were reported in Amarah and Al Basrah, Iraq, respectively.

The high temperature reached 53.1 C (127.6 F) in Sulaibiyah, Kuwait into the afternoon hours on Thursday, falling just short of the record high.

A storm system moving by to the north will suppress the area of high pressure over the Middle East into the weekend. This will cause temperatures in some locations to trend a couple of degrees lower.

However, this will be short-lived as temperatures are expected to surge again by the end of the weekend.

The Middle East holds the record for the highest temperature in Asia. Mitribah, Kuwait, recorded a high of 53.9 C (129 F) on July 21, 2016, according to the World Meteorological Organization.