A significant storm will unload everything from rain and gusty thunderstorms to snow and a rapid freeze-up across the eastern third of the U.S.

AccuWeather's expert team of meteorologists says a powerful and far-reaching storm will form at the end of the week and unload everything from heavy rain and gusty thunderstorms to high winds, snow and a rapid freeze-up across the eastern third of the United States.

The end-of-the-week storm will form along the central Gulf Coast as frigid Arctic air dives southward and collides with warm, moist air across the South. From there, the storm is expected to ride north-northeastward along the leading edge of the cold push. This storm will arrive just days after a round of snow sweeps through the mid-Atlantic and New England around the middle of the week and another swath of snow blankets the Central states through Thursday.

Forecasters say how far south and east that bitterly cold air plunges will play a pivotal role in the exact track of the storm and where the zones of rain, snow or a combination of the two set up. 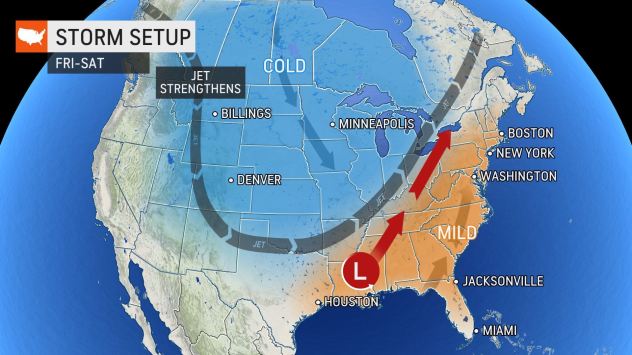 At this time, areas from eastern Oklahoma to western portions of Ohio, Kentucky and Tennessee, and even the northern parts of Mississippi and Alabama have a shot at up to a few inches of snow, with much heavier snow likely farther to the east, according to AccuWeather Senior Meteorologist Alex Sosnowski.

The snow can come down at a fast enough pace to overcome the increasing March sun angle and turn roadways slushy and snow-covered even during the daylight hours.

The return to wintry weather may be a shock to the system for residents in the southern Plains following a midweek moderation in temperatures. Within the span of 24 hours, temperatures can take a nosedive of 30-50 degrees Fahrenheit as the cold air rushes into the region. 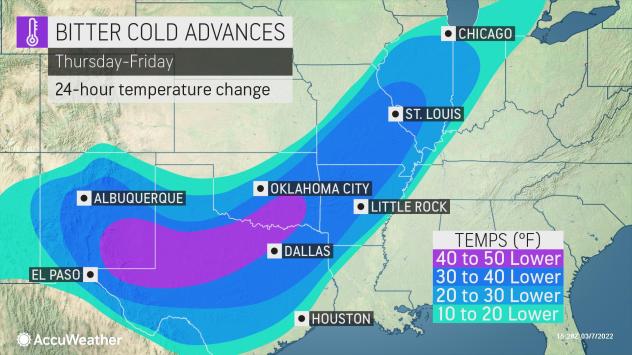 "Temperatures are forecast to shoot back up to near 70 in Dallas on Thursday, only to have rain, sleet and snow with temperatures dipping into the 30s on Friday," Sosnowski said. The last time that Dallas had measurable snow (0.10 of an inch or more) during the month of March was in 2015.

Even areas as far south as Birmingham, Alabama, could have some snow Friday night after precipitation initially begins as rain, according to DaSilva.

As the storm progresses north-northeastward and takes aim at the Eastern Seaboard heading into the weekend, it is expected to undergo rapid strengthening, reaching "bomb cyclone" status. The effect most often felt on the ground during this type of strengthening is strong winds, and forecasters say this is exactly what will unfold across the East this weekend, among a slew of other weather hazards. 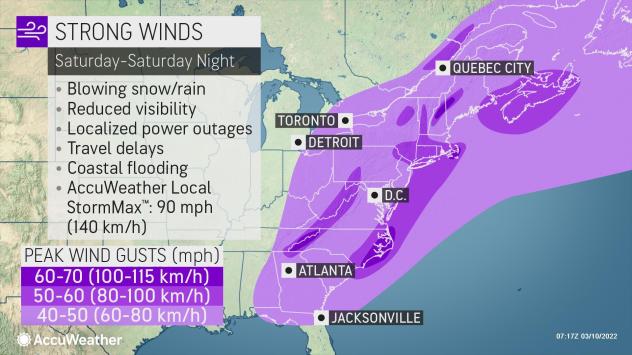 "Winds across the entire East Coast will be very gusty Saturday and Saturday night," DaSilva said, adding that power outages could be widespread.

Wind gusts of 40-60 mph are forecast to frequent areas from northern Florida to Atlantic Canada on Saturday, while the corridor of strongest winds is expected in North Carolina, along the coast or in the mountains, and in southern New England, where wind gusts may reach 70-90 mph. At this force, power outages may be extensive.

Tree damage is also of concern, forecasters say, especially if some limbs were weakened amid a line of gusty showers that swept from the central Appalachians to southeastern New England Monday.

"While there will be a threat for coastal flooding in New England Saturday, the good news is that the storm will arrive near astronomical low tide. As a result, coastal flooding may not be as big of a threat with this storm," DaSilva said. 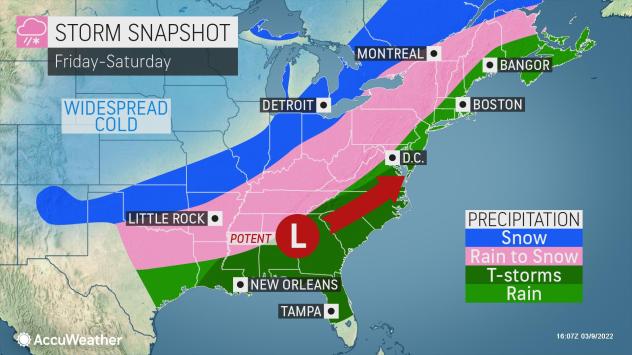 In terms of precipitation across the Northeast, AccuWeather meteorologists say the exact timing of the arrival of colder air will be crucial in determining whether locations receive heavy snow, rain changing to snow or all rain before precipitation comes to an abrupt end.

Sosnowski expressed concern about the magnitude of the cold air rushing eastward to the Appalachians with still a considerable amount of the storm to go.

Snowfall is likely to substantially ramp up farther to the east over the Appalachians.

"It is within this Appalachian zone that the air will be cold enough at the onset of precipitation, or turn colder dramatically during the event, for mostly snow to fall, with accumulations ranging from a few inches to a foot or more," Sosnowski said. An AccuWeather Local StormMax™ of 2 feet (60 cm) is most likely to occur in parts of northern Maine and the Eastern Townships of Quebec. 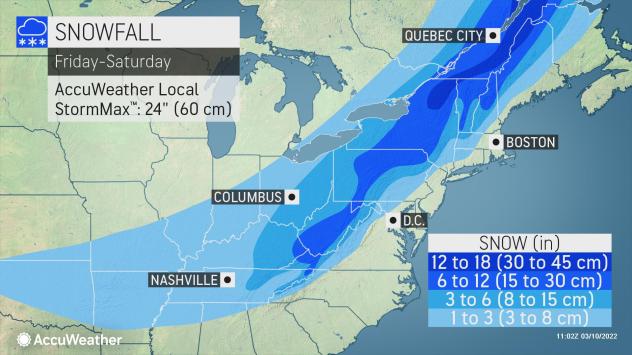 The snow can come down at a fast and furious pace and perhaps at the rate of 1-3 inches per hour in some locations.

Even in a scenario where precipitation ends before the cold air rushes in, which is the most likely case for areas along the Interstate 95 corridor, forecasters say there still could be widespread problems in terms of icy roads and sidewalks due to a sudden plunge in temperatures later Saturday and Saturday night, according to DaSilva. 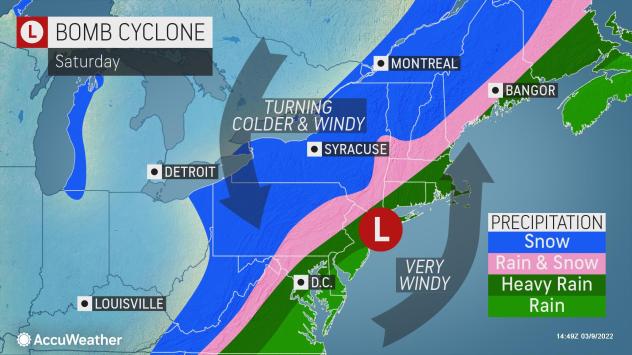 Travelers across the region this weekend are likely to face significant delays on the road and in the air. Some roads may become impassable due to downed trees and power lines.

AccuWeather meteorologists will also be actively monitoring the potential for severe weather on the southeastern side of the storm.

"The storm will have the possibility to produce severe thunderstorms from northern Florida to North Carolina," DaSilva said, noting that damaging straight-line winds may be the biggest threat, along with sudden downpours. 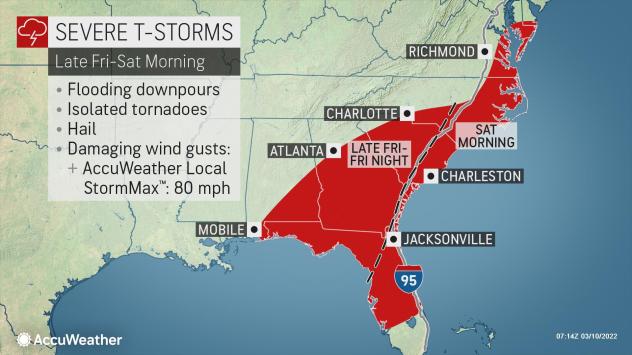 This will mark the final wave of stormy weather of the week for this part of the country, following rounds of disruptive but beneficial downpours.