Dry weather and above-average temperatures will return to the mid-Atlantic and Northeast states just in time for Memorial Day.

Residents across the Northeast who were forced to dodge showers and feisty thunderstorms during the first part of the Memorial Day weekend can finally replace umbrellas with sunscreen. A drier pattern has moved in with a surge of heat early this week, but forecasters say the summerlike temperatures will be cut short sooner rather than later in part of the region.

The drier and warmer pattern that began to take hold on Sunday set the stage for spectacular conditions weather-wise for picnics, ballgames, parades and remembrance services on Memorial Day. However, it also arrived alongside building heat in the region. 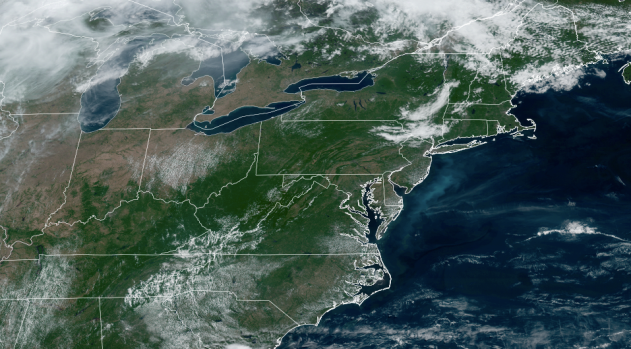 Patches of clouds were scarce in the Midwest and Northeast on Monday afternoon, May 30, 2022. (GOES-East/NOAA)

Many locations, such as Philadelphia, Pennsylvania, Washington, D.C. and Richmond, Virginia all peaked within a few degrees of the 90-degree Fahrenheit mark on Memorial Day afternoon, which is anywhere from 10-15 degrees above average for the end of May.

Memorial Day was the peak of the warmth in Boston, where high temperatures topped out at 87 F for the day. Farther south and west, Tuesday is likely to feature the hottest conditions along the Interstate-95 corridor from Richmond, Virginia, to New York City, as well as farther inland to the central Appalachians.

"While hot weather unfolded on Monday, any record-challenging heat will hold off until Tuesday when the core of the warmth shifts overhead," AccuWeather Meteorologist Matt Benz said. 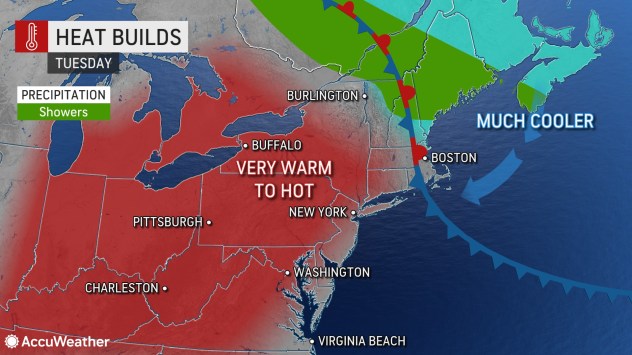 Record highs for May 31 are generally in the lower to middle 90s across the mid-Atlantic, and forecasters expect temperatures to climb within a few degrees of these highs on Tuesday.

"People heading to the beach or lakes for the first time this early in the season should be prepared for water temperatures that haven't remotely caught up with the air temperatures," AccuWeather Senior Meteorologist Alex Sosnowski said, adding that ocean water temperatures range from the low 50s along the Maine coast to the low to mid-60s in southeastern Virginia.

As air conditioners kick into high gear in these areas, AccuWeather meteorologists say that Mother Nature will put the brakes on the building heat across New England on Tuesday, with the natural cooling expected to reach the upper part of the mid-Atlantic at midweek.

"A cold front moving southward out of eastern Canada on Tuesday will sweep across New England and push back the wave of heat and humidity," AccuWeather Senior Meteorologist Mike LeSeney said.

A front that moves to the south or southwest and drags in cooler air along the northeastern part of the Atlantic Seaboard is known as a backdoor cold front, since it moves in the opposite direction of routine weather systems (west to east).

How far to the south and west this front progresses will be key in determining which areas experience the most significant temperature drops. Thermometer readings could tumble by more than 15 degrees from Monday afternoon to Tuesday afternoon in Boston as a stiff east-northeast breeze ushers in cooler ocean air. By Wednesday, the high is forecast to be no better than the 50s in Beantown.

Forecasters say the backdoor cold front will only make so much westward progress before hitting an atmospheric roadblock during the middle of the week as the typical west-to-east progression of storm systems resumes across the Northeast. 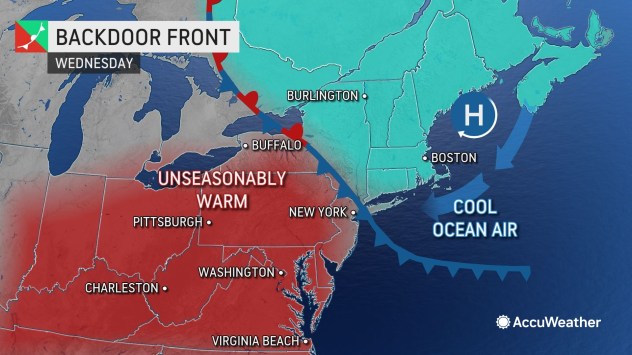 New Yorkers may be able to let Mother Nature do the work in cooling their homes if the front is able to make that much southward progress at midweek. Temperatures may be no higher than the mid-70s for the first day of June on Wednesday, provided the front does not run out of southwestward momentum beforehand.

The back door front and a front forecast to approach from the Midwest are likely to bring an increase in cloud coverage and return the threat of showers and thunderstorms across the region for the second half of the week. The squeeze play by both systems may squash chances of an official heat wave being declared in some locations across the mid-Atlantic. In this part of the U.S., a heat wave is defined when three days in a row feature high temperatures at or above 90 degrees. Portions of Maryland, Virginia and West Virginia stand the best chance of stringing together three 90-degree days during the first half of the week.

Even though most areas will fail to experience an official heat wave this week, AccuWeather meteorologists say residents can still expect a taste of summer with warmth, humidity and pop-up thunderstorms, some of which could be severe, during the first days of June.