High temps in Phoenix could crack the 115-degree mark

A scorching heat wave will bring the highest temperatures of the year so far to areas across the Southwest and southern Plains late this week and into the weekend.

A scorching heat wave that will last for days is in the cards for the southwestern United States heading into the weekend. AccuWeather meteorologists say the weather pattern could set dozens of new daily records as temperatures soar to their highest levels yet this year, including in Phoenix, which could see the mercury soar above the 115-degree mark.

Heat advisories and excessive heat watches and warnings stretched from southeastern California to southern Nevada and central Arizona Wednesday ahead of the building heat. Las Vegas, Phoenix and Palm Springs, California, were included within these watches, signaling to residents the need to prepare now for the sizzling conditions. Temperatures in Phoenix already climbed to 110 degrees Fahrenheit on Wednesday afternoon, the highest temperature so far this year. 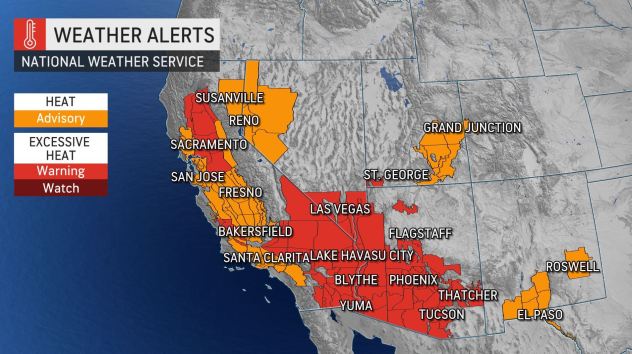 Daytime temperatures are predicted to top out 5-10 degrees Fahrenheit above normal late this week and into the weekend. The heat is likely to peak in most areas Friday and Saturday.

Although these temperature departures may seem far from extreme, forecasters say it's important to keep in mind that average highs in the Desert Southwest are already in the upper 90s to middle 100s at this point in the year. That means this wave of heat will push temperatures into the upper 100s and 110s, levels that can be dangerous for even those who are accustomed to extreme heat. 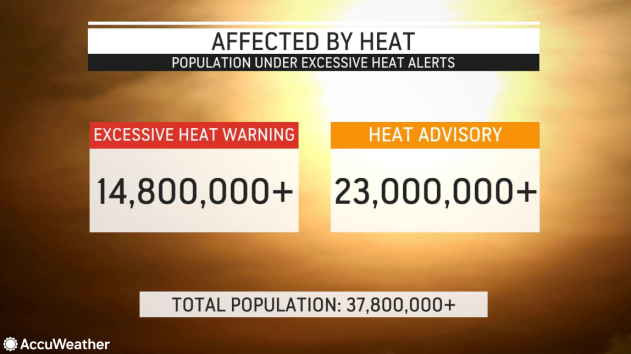 "Energy demands will climb as residents rely on indoor air conditioning," Smithmyer said, adding that this could increase energy prices and even result in power grid failure.

The heat will come in response to a northward bulge in the jet stream, which will allow hot air to flow in from the south. At the same time, this jet stream configuration will send a firehose of moisture into the Pacific Northwest and southwestern Canada, leading to a significant flood risk later this week.

AccuWeather Senior Meteorologist Alex Sosnowski said this type of pattern with surging heat is typical ahead of the North American monsoon later in June and July. 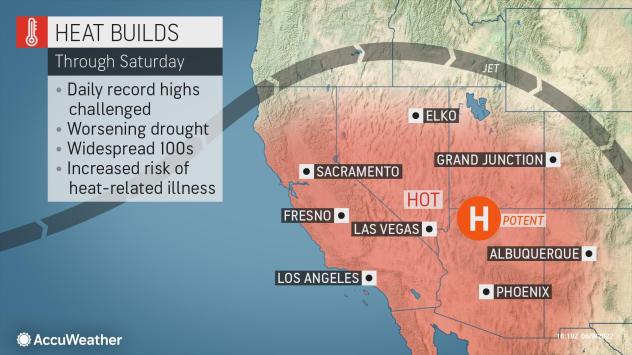 Amid this particular heat surge, forecasters expect dozens of daily record highs to be challenged, including long-standing ones from the early 1900s.

While Phoenix now has one 110-degree day under its belt after Wednesday's sizzler, several more are expected to arrive in quick succession. The Valley of the Sun may experience three consecutive days from Friday through Sunday with near-record highs in the middle 110s. Saturday's high in downtown Phoenix could approach or exceed the daily record of 114 that has stood since 1918.

In the high-elevation city of Flagstaff, Arizona, where average highs prior to the middle of June are in the middle to upper 70s, the June 10 record high of 87, which has stood for 112 years, could be in jeopardy.

Death Valley, California, home to the highest temperature ever recorded on Earth, is expected to approach 120 by the weekend, according to AccuWeather's forecast, challenging Saturday's record of 121 set in 1921.

And the extreme heat will spread northward as well.

Places like Reno, Nevada; Sacramento and Fresno California; Salt Lake City, Utah; and Albuquerque, New Mexico, are other metro areas where this wave of heat could stamp new marks in the weather history books.

"Visitors to the Southwest who are not acclimated to the intense heat should take additional precautions to avoid heat-related illnesses," Smithmyer said.

Experts urge people throughout the affected areas to minimize strenuous activity during the hottest times of the day and drink plenty of water or electrolyte beverages, even if they are not thirsty, to maintain proper hydration levels. Measures should also be taken to ensure that pets and young children are protected from the intense heat.

"Additionally, the successive days of dry weather and intense heat across the desert regions and lower valleys of the Southwest will add to the worsening drought situation," Smithmyer said. 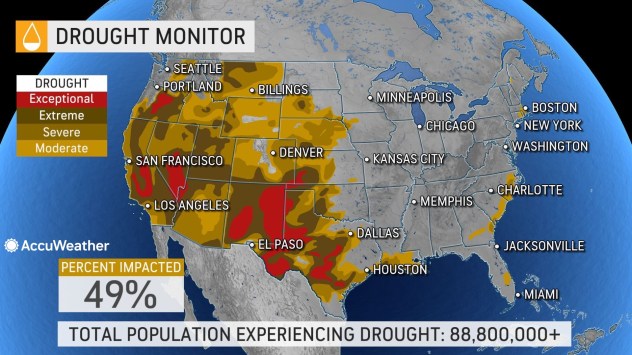 The parched conditions helped fuel a wildfire in Hesperia, California, Monday, which has left at least one person injured from burns.

The hot pattern will continue to be a rather dry one across the region, but AccuWeather Long-Range Meteorologist Brandon Buckingham noted that there may be a slight uptick in moisture across Arizona and New Mexico late in the week that could ignite thunderstorms with little to no rainfall in the high terrain. These storms may cause more harm than good by producing dangerous lightning strikes that ignite wildfires.

Outside of these remote chances for rain, AccuWeather's long-range team anticipates above-average warmth and dry weather to be the theme across the Southwest into the middle of the month before the monsoon picks up heading into July.