A dip in the jet stream will bring rain and mountain snow chances as far south as Central California before another storm delivers wet weather to much of the West Coast.

The recent weather pattern has sent waves of rain and mountain snow across the Pacific Northwest, but AccuWeather forecasters say that a late-week storm could bring a significant amount of snow to the Sierra Nevada and dip far enough south for rain to fall in parts of parched Southern California.

Some rain and mountain snow fell over the weekend as far south as Central California. On Monday, precipitation was spottier with just some light rain showers and snow showers in the mountains. While precipitation increased along the coasts of Washington and Oregon on Tuesday, bringing 0.40 inches of rainfall to Eugene, Oregon; a much more impactful and wide-reaching storm is expected by midweek. 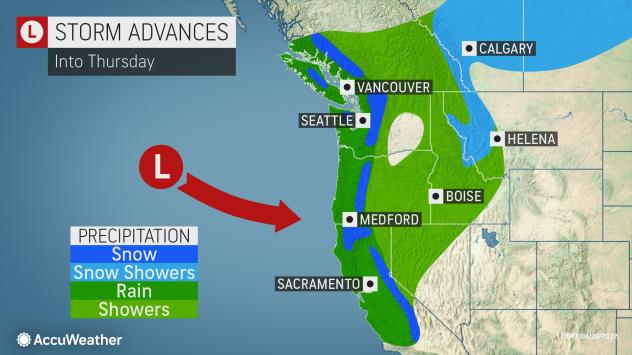 The next system was unfolding like its predecessor, with precipitation first overspreading the Northwest at midweek. However, on Thursday and Thursday night, much of the West Coast is likely to deal with rain and mountain snow.

The second storm will build on a far more significant dip in the jet stream and not only spread rain to the Northwest, but also continue southward along the coast into Southern California later this week, according to AccuWeather Senior Meteorologist Matt Rinde.

The storm will create enough cold air for snow to fall at elevations as low as 4,000 feet. But, starting at around 5,500 feet and above, a foot or more of snow is likely to accumulate from Wednesday night to Thursday night, forecasters say. 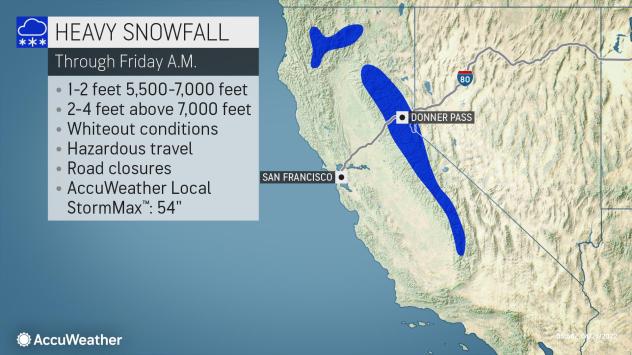 "A general 2-4 feet of snow is likely to fall over much of the central and northern Sierra Nevada," AccuWeather Meteorologist Nicole LoBiondo said, adding that, "motorists should avoid travel over Donner Pass, California, along Interstate 80 from through Thursday to allow crews to work during the storm." There is the potential for the highway to close for a time with up to 2 feet of snow forecast to fall at pass level.

An AccuWeather Local StormMax™ of 54 inches is anticipated over some of the ridges and peaks in the Sierra Nevada from this storm. Snow accumulations of a few feet will provide a late-season boost to the lean snowfall seen over the mountain range this past winter, which, in turn, will result in a much-needed boost to the water supply.

The heaviest rain is predicted to fall over Northern and Central California, but some rain could make it farther south into Los Angeles. 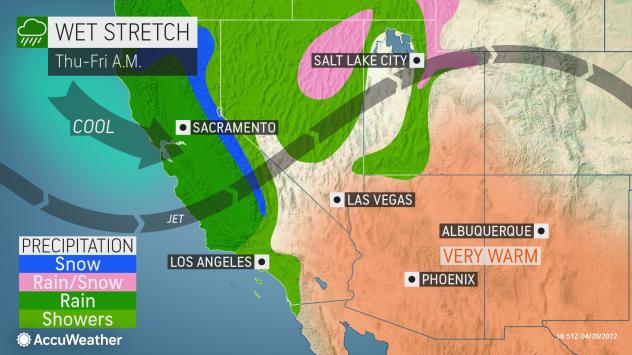 After a surplus of precipitation in December, rain and snow have been at a premium in California through the first part of 2022. The entire state is reporting at least moderate drought, with over 95% of the state in severe drought. Almost half of the Golden State, 47% to be precise, is in an extreme drought. The wet December might be the only reason why California is not reporting any pockets of exceptional drought, the worst category that can be assigned by the United States Drought Monitor.

"So far this season, just over 18 inches of rain has fallen in Ukiah, California, since October, which is only about half of the city's normal rainfall during that time period," explained AccuWeather Meteorologist Nicole LoBiondo.

The drier-than-normal winter has left many of the water reservoirs across California below typical capacity, including Shasta Lake and Lake Oroville, the state's two largest water reservoirs.

This week's stormy pattern will be no more than a drop in the bucket and a fairly empty bucket at that. The amount of rain will increase water levels a small amount but will fall well short of what is needed to replenish them to the typical levels for late April. 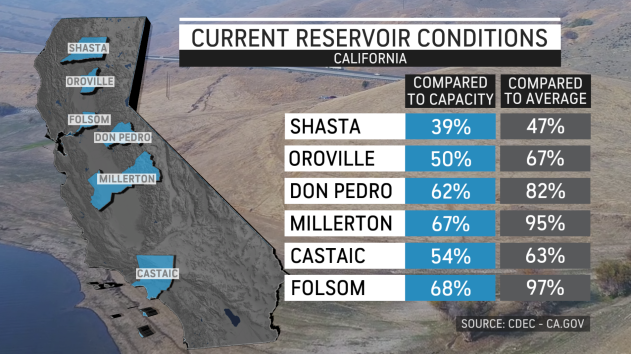 By the weekend, this storm is expected to move into the central United States, where a blizzard could bury the northern Plains, while the central and southern Plains will be at risk for a severe weather outbreak.

The weekend will likely turn out dry in much of the West before the next system comes ashore on Monday, AccuWeather forecasters say. Unfortunately, any precipitation with that storm is unlikely to make it down to Southern California.

Long-range forecasts indicate that a new storm could arrive in the Pacific Northwest every few days. In much of California, however, time may be running out.

As April transitions into May, normal precipitation falls drastically. For example, rainfall in San Francisco goes from 1.36 inches in April to just 0.48 of an inch in May. Similar drops occur elsewhere in the Golden State, with far southern portions of California only averaging one-quarter to one-third of an inch during the month of May in places such as Los Angeles and San Diego.