Summertime heat, humidity to return in Northeast before holiday weekend

July will usher in the return of widespread heat in the northeastern U.S. with AccuWeather RealFeel® Temperatures returning to the century mark in some cities.

Relief from the heat will be short-lived in the Northeast and mid-Atlantic as temperatures are expected to rise back into the 90s by the end of the week.

Residents of the Northeast have enjoyed a break from hot and humid conditions for much of the first full week of summer, but AccuWeather forecasters say that will all change as the calendar flips to July.

"There will be a buildup of hot and more humid air in the East late this week, since a high pressure system is expected to begin to drift offshore," said AccuWeather Senior Meteorologist Carl Babinski. 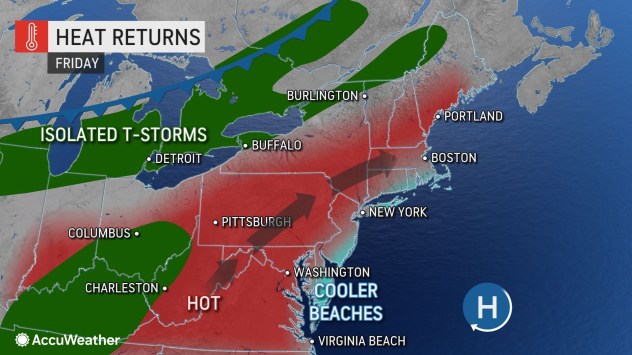 Anyone planning to do yard work ahead of the extended Independence Day weekend should plan to work outside before Friday when the surge of heat and humidity will set in. However, while it may feel comfortable outside, people should be mindful of the strong sunshine this time of year and apply sunscreen before spending extended periods of time outside.

Temperatures on Wednesday were a few degrees higher than Tuesday. Highs ranged from the 70s F in upstate New York, including a high of 77 in Syracuse, to a high of 86 around Washington, D.C., with humidity levels lower than what is typically experienced at the end of June.

Even on Thursday, the humidity will still be relatively comfortable. However, temperatures may reach as high as 90 degrees in Washington, D.C., and even as far north as Philadelphia and Harrisburg, Pennsylvania. Farther to the north, middle 70s should still be common from upstate New York to northern New England.

Temperatures will continue their upward trend as July kicks off on Friday. In many locations along the Interstate 95 corridor, the mercury will soar above 90 degrees. The "cool" locations of upstate New York and northern New England are even expected to reach the middle 80s.

Humidity will trend higher on Friday as well. This will send AccuWeather RealFeel® Temperatures over 100 degrees Fahrenheit from southeastern Pennsylvania and down through Baltimore, Washington, D.C., and Richmond, Virginia. 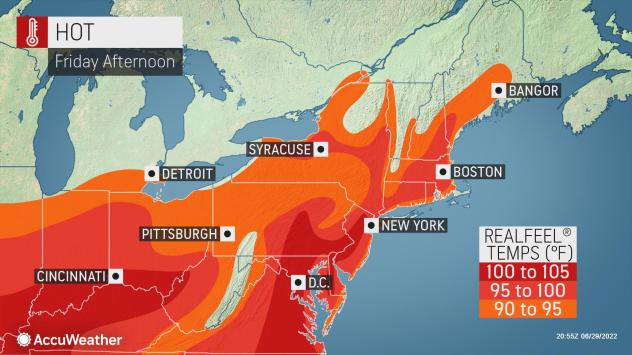 Anyone working outdoors will need to stay hydrated and take frequent breaks. Those traveling will want to make sure that the air conditioning in their car is in good working order.

The holiday weekend itself is likely to begin with thunderstorms on Friday afternoon and evening around the Great Lakes and part of the central Appalachians. On Saturday the storms will focus from the Appalachians to the Atlantic coast as a cold front moves southeastward. Any of the storms through Saturday will have the potential to be quite heavy and gusty.

While this front will trim the heat and humidity, it may lead to more than one day of the holiday weekend being wet.

"If the front slows down, the potential exists for a few additional showers and a thunderstorm on Sunday, especially in the mid-Atlantic," said Babinski. 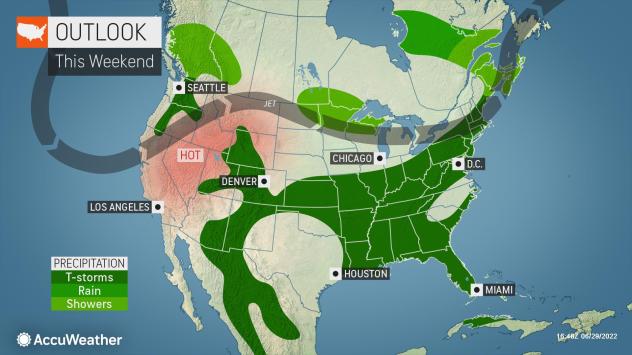 Often in the summer, cold fronts do not get very far to the south. This one looks no different, and it may cause a problem for some on the holiday itself.

"Places such as Virginia, Maryland, southern Delaware and West Virginia could still be dealing with a couple of showers on the Fourth of July since the front is expected to stall over that general area," said Babinski.

Folks planning cookouts, a trip to the beach or a hike in the woods should keep an eye on the radar throughout the holiday weekend and have backup plans in the event that it rains. 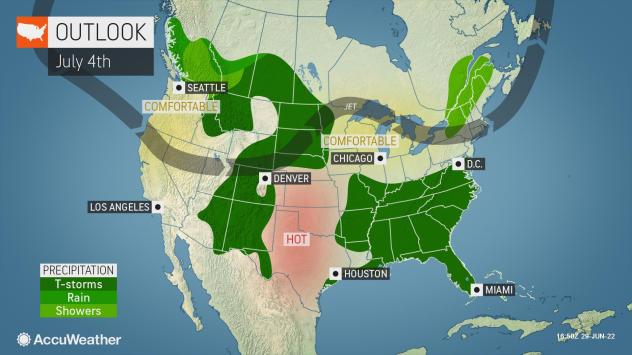 Meanwhile, locations farther to the north should have drier conditions, a mix of clouds and sunshine and seasonable temperatures.

Another front moving down from the north on Tuesday and Wednesday may finally push the first front a bit farther to the south, allowing dry conditions to prevail across most of the region once again.