Warmest Christmas ever? Sweltering month in the Plains to continue

Some major cities could see their highest Christmas temperatures in nearly 100 years, while others could be in need of an all-new record book for Christmas.

Temperatures will run far above normal from Texas to Iowa, with major cities throughout the region set to match or top their daily record high for Dec. 25.

This Christmas could be the warmest in more than 50 or even 100 years for parts of the south-central United States, and AccuWeather forecasters say several cities are tracking toward experiencing their warmest December on record.

"Dallas, Houston, Oklahoma City and Tulsa, Oklahoma, Little Rock, Arkansas, and Memphis, Tennessee, all stand to match or top the record high for Dec. 25. this Saturday," AccuWeather Senior Meteorologist Brett Anderson said, adding that highs in the 70s and 80s F, which will be common for much of the south-central region, are more typical of early to mid-October.

In Memphis and Tulsa, record highs that date back more than a century or nearly a century could be challenged. The record high for Dec. 25 in Memphis is 76 from 1889. In Tulsa, the record temperature is 73 from 1922.

On Christmas Day, many areas were quick to tie and break records. Before noon several cities were already breaking record high temperatures.

Jackson-McKellar, Tennessee broke their warmest Christmas on record by 2 degrees. Louisville reached the 70s for the first time ever on Christmas Day, breaking the old warmest Christmas record of 69 degrees. Both records came before noon local time.

By the afternoon, San Angelo reached the 80s and Abilene, Texas hit 77 degrees, breaking a Christmas record for both cities. 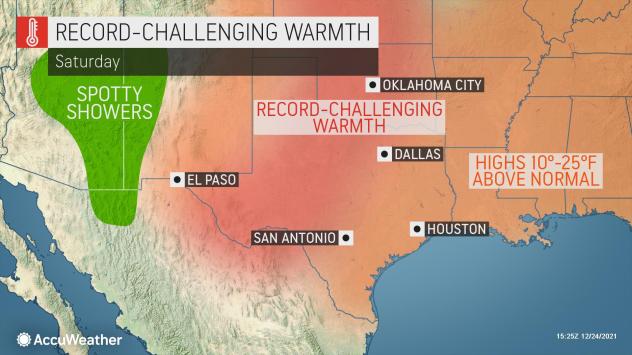 AccuWeather is projecting a high of 83 in Dallas on Saturday, which could set a new daily record for Christmas Day. Dallas' current record of 80 was established in 2016.

In the afternoon, Dallas had already reached 81 degrees, officially breaking the old record for the day.

AccuWeather forecasters are also predicting a high of 77 on Christmas Day in Little Rock, Arkansas, which has a Christmas record high of 73, but that mark has not been threatened since 1942. Oklahoma City may come within striking distance of its record high of 73 set in 2016.

For Christmas Eve, record high temperatures weren't set in Dallas Fort Worth or Waco, but Christmas Day will challenge record warmth for both areas.

On Christmas Eve, some areas broke record high temperatures ahead of Christmas. Wichita Falls, Texas exceeded 90 for the very first time in the month of December, topping out at 91 degrees. Galveston, TX broke a daily record by reaching 78 degrees. Houston tied their daily record of 82 degrees which was set in 1948.

Forecasters cautioned those planning to use outdoor grills, barbecue pits and any open flames on Friday due to the gusty winds. In some cases, winds were strong enough to kick up dust in parts of Kansas, Oklahoma, Texas, Colorado and New Mexico. While the magnitude of the wind and blowing fell well short of the dust storm from last week, travel conditions became tricky in open areas for a period of time.

Across Arizona, New Mexico and northern Texas there were multiple reports of wind gusts ranging upwards of 60 mph, with a peak wind gust reported in Magdalena, New Mexico at 68 mph.

It has already been an unusually warm month for much of the central and southern Plains as well as in adjacent areas from the Rockies to the Mississippi Valley this December.

Temperature departures of 5-10 degrees from the average for a stretch of a few days are not uncommon, but pronounced departures of 10 or even 12 degrees over longer periods are exceptional and when these types of departures from the norm extend across an entire month, it's downright rare.

A northward bulge in the jet stream has been responsible for the warm weather and has persisted much of the month, but the jet stream will begin to shift to the south again next week. Still, that probably will not bring enough cool air to avoid the warmest December on record from unfolding in many locations over the south-central region, forecasters say.

In Dallas, the first 24 days of December have run 10.8 degrees above the monthly normal of 49.0 degrees. At the current pace, the all-time monthly December record of 53.6 degrees is in jeopardy of being broken, if not shattered, AccuWeather Meteorologist Randy Adkins said. As of Dec. 24, the average temperature this month in Dallas was at 59.8 degrees.

There is a long list of cities over the Central states that could exceed their warmest December on record, and like Dallas, the mark may be topped by several degrees. 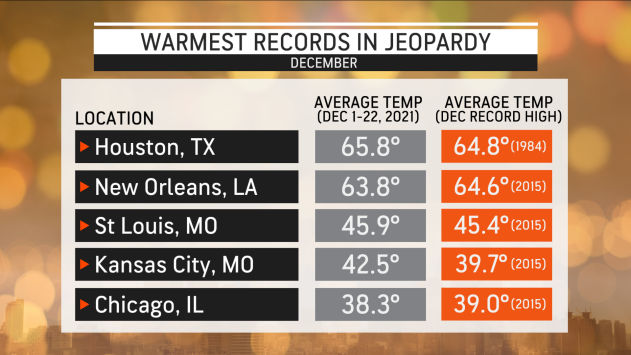 Come the end of the month, the map could be peppered with cities that finish 5 degrees, or more, above average and make a run at their warmest December on record. Chicago, St. Louis and Kansas City, Missouri; and Nashville and Memphis, Tennessee; could all challenge records. Oklahoma City; Omaha, Nebraska; Des Moines, Iowa, and Denver could as well. And places to the south, like Austin and San Antonio, Texas; and New Orleans and Shreveport, Louisiana; are on tap to finish with an unusually warm December.

While some of the more northern locations -- such as Chicago, Denver and Omaha -- may miss the December all-time high mark due to a bit of chilly air later this month, this month will still likely go down as one of the top five warmest Decembers for each of those locations. 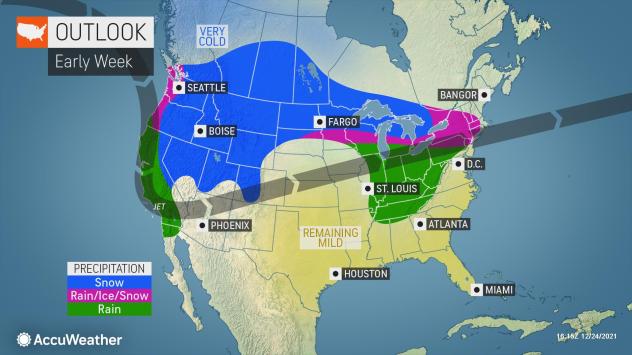 The recent pattern has limited cold air from Canada from penetrating very far to the south and contributed to two major outbreaks of severe weather, including the deadly tornadoes the night of Friday, Dec. 10 that ravaged the middle Mississippi, Tennessee and lower Ohio valleys.

Also contributing to the warm trend has been the lack of moisture in the soil across the region, much of which is experiencing abnormally dry or extreme drought conditions. Even though the sun's rays are rather weak during December, minimal moisture in the ground means a larger share of the sun's energy heats the atmosphere closest to the ground since little is spent on evaporation.

The persistent convoluted jet stream has allowed storm after storm to drop southward along the Pacific Coast. These storms have unleashed rounds of drenching rain and feet of mountain snow from Washington to California so far this December with the pattern likely to continue through the end of the month.

Any dips in temperature over the South Central states into the final days of December are not likely to last long. Temperatures may return to near average during the last day or two of December in part of the region. For example, Dallas is projected to have a high close to the average of 56. High temperatures within a few degrees of average have been rare and only occurred on a handful of days so far this month.