Typhoon Haishen's powerful winds and heavy rain blasted the Japanese island of Amami Oshima Island on Sept. 6, as the storm swept through the region.

Autumn will begin with multiple tropical threats to populated areas in both the western Pacific and Indian Ocean basins, which will add to the flooding risk as many areas are already saturated from heavy rainfall during the summer season.

With weak La Niña conditions forecast to prevail during the autumn season, associated cool waters over the central Pacific will contribute to warmer-than-average sea surface temperatures over the western part of the Pacific basin during much the upcoming season. 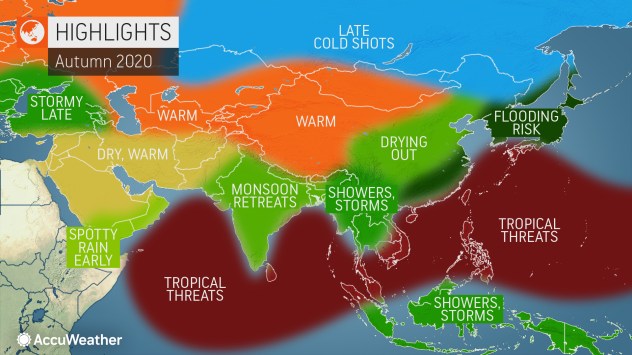 La Niña is part of a routine cycle of tropical Pacific sea surface temperatures. During a La Niña, water temperatures are higher than average in the western part of the Pacific and lower than average in the eastern part of the Pacific. The cycle can reverse from one year to the next or take a few years to complete and remain neutral in between warm and cool cycles for a time. As a general rule, where waters are warmer than average, an uptick in storms and tropical activity generally occurs.

The anticipated conditions may tone down the overall number of storms birthed in the central Pacific, but threats from the Philippines to Taiwan, eastern China, the Korean Peninsula and Japan will be a concern as is often the case during the autumn season.

Kaohsiung International Airport, Taiwan, located on the southwestern part of the island picked up 17.60 inches (447 millimeters) of rain during August compared to a normal of 5.34 inches (137 millimeters). From June 1 through the end of August, the location received more than double its normal rainfall with 28.56 inches (725 millimeters).

At Naha, Japan, located on the island of Okinawa, 51.28 inches (1,303 millimeters) of rain fell from June 1 through Aug. 31, which is more than three times that of average. Meanwhile, Seoul, South Korea, had more than double its normal summer rainfall with 43 inches (1,092 millimeters).

Following Maysak's blow at the start of September, Haishen took a similar track and became the second of a one-two punch to part of the area in East Asia already hit hard by summer's heavy rainfall. 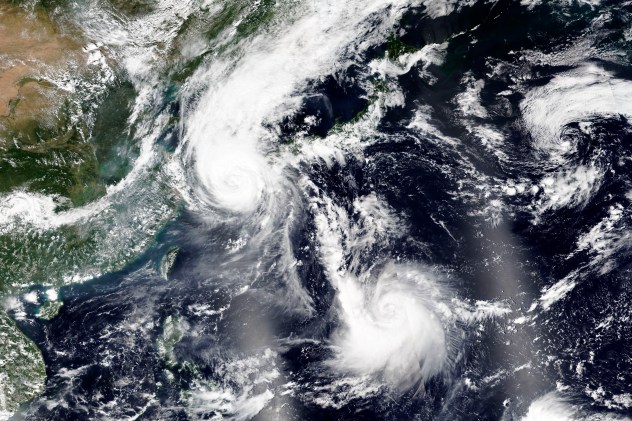 As of Sept. 25, there have been 16 tropical depressions, of which 12 have strengthened into tropical storms and five have gone on to become typhoons. Haishen is the only system to reach super typhoon status so far in 2020.

Because the Pacific is so large, the typhoon season typically runs through the end of the year.

"Because La Niña conditions have now officially developed, as we suspected it would, we have further lowered our forecast for the numbers of tropical storms and typhoons for the 2020 western Pacific season," AccuWeather's top tropical weather expert Dan Kottlowski said.

AccuWeather meteorologists, led by Kottlowski, are expecting a total of 18 tropical storms, with 10 typhoons and two super typhoons. The team progressively lowered the numbers of forecasts through the summer as it became more confident of La Niña developing. 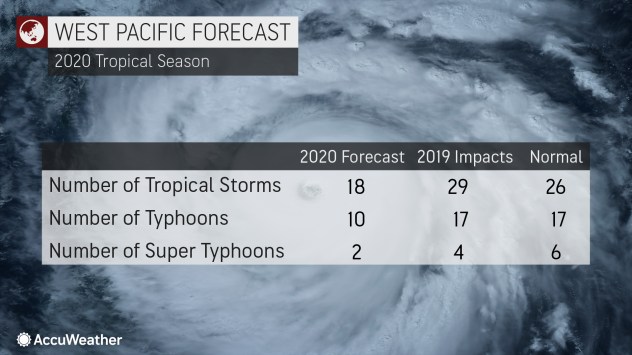 La Niña causes cooler waters over part of the central part of the Pacific, where many typhoons have their origins, and hence shrinks the development area in general.

"The least active year on record for typhoons in the western Pacific was in 2010, when there were only 14 tropical storms, nine typhoons and only one super typhoon," Kottlowski said.

That season transitioned to La Niña conditions as well.

AccuWeather began to trim forecast number of tropical systems for the western Pacific over the course of the summer, following its original forecast from the spring.

The 2020 West Pacific typhoon season got off to a slow start with the first system not forming until Vongfong developed in mid-May.

However, as is often the case, lower than average numbers do not necessarily define a season as there have already been damaging and deadly effects from tropical systems thus far.

"The ongoing tropical threats coupled with non-tropical rains will keep the flooding risk elevated from eastern China to the Korean Peninsula and Japan this season," Nicholls added. 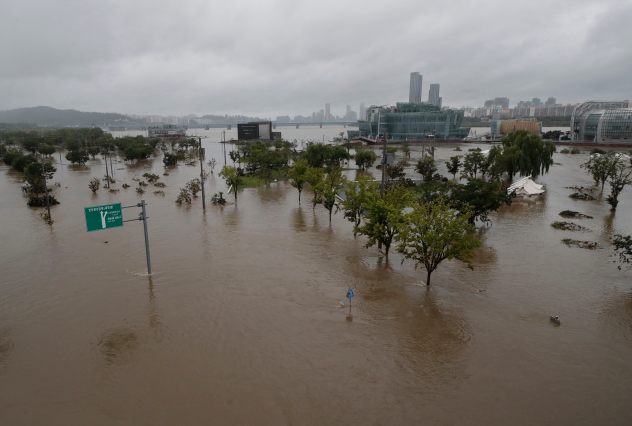 Heavy rains in southern China have eased up in recent weeks, but the region remains saturated and river levels remain high from widespread rainfall this summer. Rainfall in September is not forecast to be excessive but near normal.

"Given the elevated water table, flooding will remain a concern in southern China through at least October," Nicholls stated.

Drier conditions forecast in November can help to ease the flooding problems late in the season.

The warm temperature anomaly in western Pacific waters will also help to fuel substantial rain across Southeast Asia, Indonesia and Malaysia this autumn. 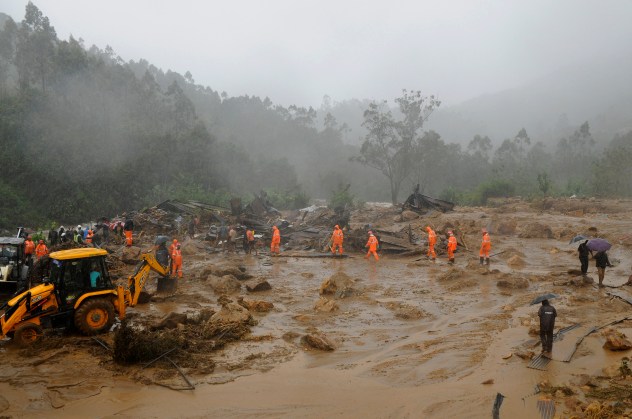 Adding to the flooding concern will be the threat from tropical systems and the torrential rain they are expected to unleash from Vietnam to Thailand.

Barring late-season tropical threats, late-season drying is forecast to reach the Korean Peninsula. Near- to above-normal rainfall in northeastern and central China early in the autumn is forecast to be followed by drier conditions as the East Asia monsoon begins its seasonal withdrawal.

Meanwhile, the Southwest (India) monsoon is forecast to begin its withdrawal through South Asia slower than average this season. 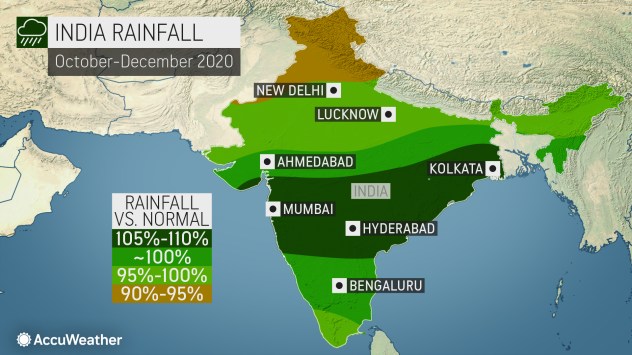 On average, the monsoon begins its retreat in northwestern India at the very start of September.

With the later withdrawal of the Southwest monsoon, the Northeast monsoon onset in southern India may be delayed until late October.

"Some of the rain from non-tropical systems will be excessive and can lead to flooding across Vietnam, Laos, Cambodia, Thailand, Myanmar, Indonesia and Malaysia," Nicholls said.

"Onset of the Northeast monsoon in Chennai, India, can be delayed a week or perhaps more from its average Oct. 20 start date," Nicholls added.

AccuWeather's team of international meteorologists expects a normal to above-normal monsoon season across much of southern India from October through December. This Northeast monsoon brings a surge of rainfall to parts of eastern and southern India as dry air invades the main Asia continent. Far southern Tamil Nadu and Kerala, India, and Sri Lanka could be drier than average due partially to the late onset of the monsoon.

"Sri Lanka may make up for rainfall deficits from October to December as the Northeast monsoon and associated wet weather may last into January," Nicholls said.

Tropical depressions or cyclonic storms are forecast for both basins of the northern Part of the Indian Ocean this autumn.

"The wild card for rainfall in South Asia will be the threat from tropical systems," Nicholls said.

Long-term weather and sea surface conditions are predicted to favor more storms over the Bay of Bengal, but the Arabian Sea will be quite active this season, too.

"Steering winds may favor most storms in the Bay of Bengal to impact northeastern India and Bangladesh, but tracks into southern India cannot be ruled out," Nicholls said. "Systems in the Arabian Sea could impact western India, but the favored areas for impacts look to be toward the southern Arabian Peninsula."

Drier weather is forecast to return to the southern part of the Arabian Peninsula during November.

Much of the rest of the Middle East will be drier and warmer than average for the autumn as a whole. But as is sometimes the case, an uptick in stormy and wetter conditions is forecast across Turkey and perhaps the northern parts of Iraq and Iran late in the season.

"The higher elevations of Turkey and the Caucasus Mountains in southern Russia, Georgia, Azerbaijan and Armenia could get the first snow of the season during late October or November this year," Nicholls said.

Much of East Asia is forecast to have near- to above-normal temperatures during this autumn, but as is sometimes the case, late-season cold shots are forecast to spread southward from Siberia and into Mongolia and northeastern China. Cold air is also forecast to settle into portions of Kazakhstan later in the autumn.