A pair of weak storm systems will travel across the Midwest and eastern U.S. late this week and into the weekend, bringing flooding downpours and much-needed relief from the heat.

As a storm travels from the Midwest to the mid-Atlantic, the ongoing threat of flooding downpours and severe thunderstorms will exit into the start of the weekend, AccuWeather meteorologists say.

Concern was growing among AccuWeather's forecast team of an escalating threat of flash flooding as the weather pattern develops. "Much of the region has dealt with repeated rounds of heavy thunderstorms producing torrential downpours," AccuWeather Chief Meteorologist Jonathan Porter said. "And localized flooding has already been a problem in many communities this week."

Already on Friday night, there were pockets of ongoing flash flooding in the Appalachians and Mid-Atlantic. In Charlottesville, Virginia, upwards of 3 inches quickly fell as heavy thunderstorms moved through, prompting a Flash Flood Warning as streets become waterlogged in the city. Farther west, flooding was reported at Marshall University, located in Huntington, West Virginia. The flooding was reportedly widespread on the campus, and even prompted evacuations of some buildings.

As severe thunderstorms and flash flooding continue to pester Montana and portions of the northern Plains into this weekend, a significant weather battle zone will set up hundreds of miles farther to the south and east into Saturday. 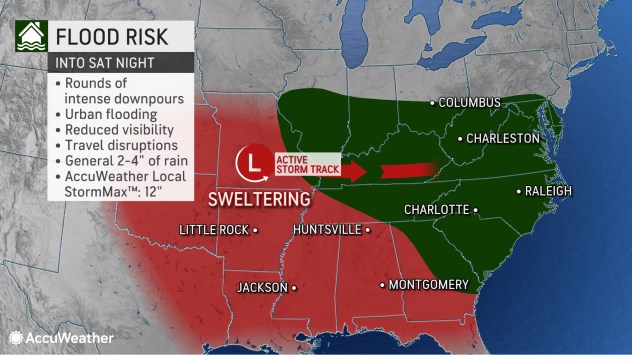 A weak storm that emerged from the Colorado Rockies on Wednesday unleashed 2-4 inches of rain in as many hours early Thursday morning in parts of northern Kansas and Missouri and southern Nebraska and Iowa. Cameron, Missouri, located just to the northeast of Kansas City, Missouri, picked up 3.18 inches of rain in about three hours.

This same storm system traveled eastward across the Ohio Valley states Thursday with locally heavy rain on its northern flank and severe thunderstorms farther south. That storm weakened upon crossing the central Appalachians, but a second system tracked through just a day later.

That second storm took a similar path from the central Plains to the Ohio Valley into Friday night. Flash flooding was most prevalent in places where the rain overlapped with downpours that occurred earlier this week. However, even in locations where little or no rain has managed to fall recently, the intensity of the downpours still threatened to lead to rapid urban and small stream flooding. 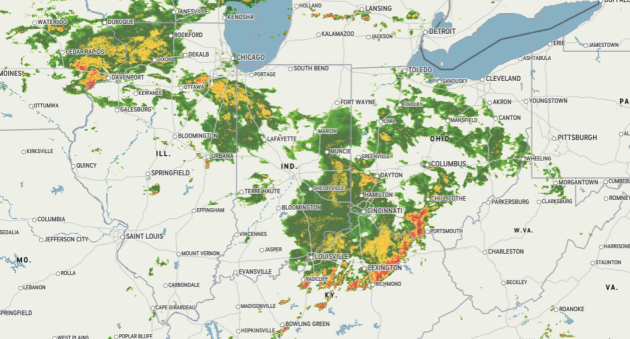 On this radar image taken on July 8, 2022, downpours associated with a storm system stretched from parts of Illinois to Ohio on Friday afternoon. Heavy thunderstorms were occurring father to the south over the Ohio Valley. (AccuWeather)

The heaviest rain stretched across central portions of Illinois, Indiana and Ohio into Friday night. Part of this zone received 3-6 inches of rain earlier this week and is more prone to flooding than areas that dodged the rainfall. The risk of flash urban and small stream flooding may extend from Peoria, Illinois, to Indianapolis and Columbus, Ohio.

Part of this zone was hit hard with severe weather on Wednesday. One of the storms produced a tornado in Goshen, Ohio, that was rated as an EF2 by the National Weather Service.

As the storm tracks through the mid-Atlantic on Saturday significant rainfall can continue. 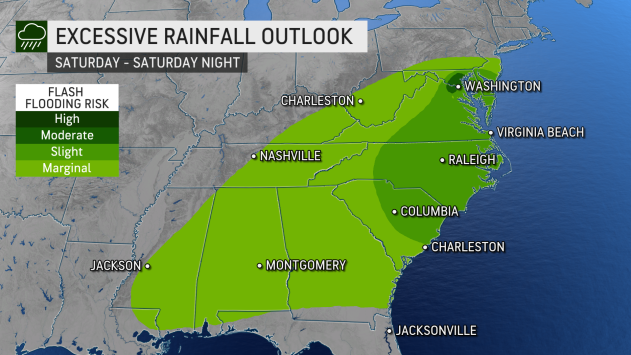 "Drivers are advised to be especially mindful to avoid areas where water covers the road because it is impossible to know how deep the water is or how fast the water is moving," Porter cautioned of the looming threat. He added that just six inches of fast-moving water can be enough to cause tragic results.

Despite the threat of flooding, rainfall will be a welcome sight in parts of the mid-Atlantic. Pockets of abnormally dry conditions exist in southern Pennsylvania, Maryland, northern Virginia, Delaware and southern New Jersey, but the drought is more severe farther south in southern Virginia and North Carolina. 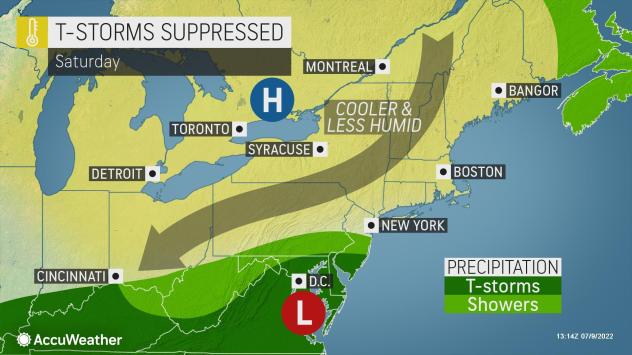 Farther to the north, many storm systems and rounds of showers and thunderstorms have avoided areas from northern Pennsylvania and New Jersey to New England in recent weeks. With intense sunshine this time of the year capable of evaporating one-quarter to one-half of an inch of moisture from the ground on a daily basis, soil conditions have gotten quite dry.

While this may be good news for those with outdoor plans and construction projects, from an agricultural standpoint, neither of the two storm systems will have much success in bringing relief from the dry conditions across upstate New York, and northern New England, according to AccuWeather Senior Meteorologist Dave Dombek.

"Instead, a reinforcing dose of cool, dry air will push southward over much of the Northeast this weekend," Dombek said. 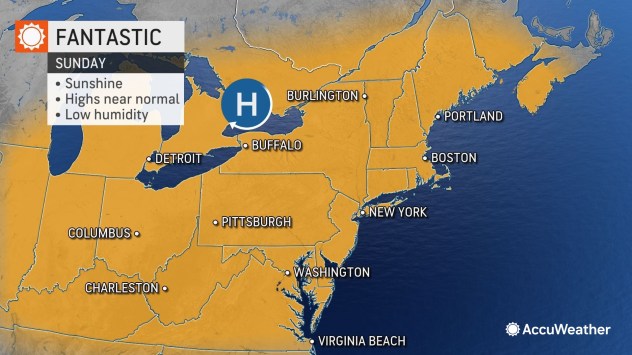 July is a critical time of the year for corn, grapes and a variety of annual crops to fill out and mature in order for a healthy yield to occur during the late summer and autumn, experts say.

Dry air will sag southward in the wake of the second storm system on Saturday night and Sunday. This will mark an end to the downpour threat in areas from southern Pennsylvania and southern New Jersey through much of Virginia. In areas south of Virginia, the weather is likely to remain unsettled with showers and thunderstorms through the weekend and into next week.