Gary Greff is a strong believer in 'build it and they will come.' This educator-turned-artist managed to single-handedly create something so awe-inspiring that people travel from far and wide.

This 32-mile stretch of road is lined with seven massive sculptures that were built in hopes of keeping the town of Regent, North Dakota, alive.

Drive through the Great Plains region of the United States and, beyond the larger cities like Bismarck and Rapid City, you’ll see something much more common along your drive -- tiny towns with little more than 100 permanent residents and, if you’re lucky, one gas station and a few storefronts.

One of these tiny towns is Regent, North Dakota. But this destination, located 30 miles off the main thoroughfare of Interstate 94, manages to attract as many as 6,000 tourist vehicles per year, and it’s all thanks to one under-appreciated resident.

Gary Greff was born and raised in Regent before leaving the town to pursue a career in education. After 18 years, he returned to find his hometown slowly dying, its population and economy dwindling. So Greff took it upon himself to do something about it.

While his fellow residents looked for a factory to move into the area, he knew the likelihood of this option was slim. Instead, he wanted to boost tourism by bringing travelers off the interstate and into Regent.

His plan? Give people something to behold.

And from the road, people driving their cars simply can't miss what he came up with. Greff has built a series of huge, scrap-metal sculptures along the highway from Exit 72 South all the way into town.

"Pheasants on the Prairie", a 40-foot tall metal sculpture honoring the game bird near Regent, North Dakota, is seen on Oct. 8, 2009. The sculpture is one of seven large roadside sculptures on the Enchanted Highway built by artist Gary Greff. (AP Photo/Will Kincaid)

The 30-mile stretch is now known as The Enchanted Highway, and it boasts some of the world’s largest metal sculptures. It was a recent stop on AccuWeather's #GreatAmericanRoadtrip, airing all month on the network.

Greff’s "Geese in Flight" sculpture, which stands at 110 feet tall and 154 feet wide and weighs more than 70 tons, has been recognized by the Guinness Book of World Records, is particularly riveting. "Geese in Flight" is one of seven sculptures on the highway created mostly out of metal recycled from oil well tanks and piping. 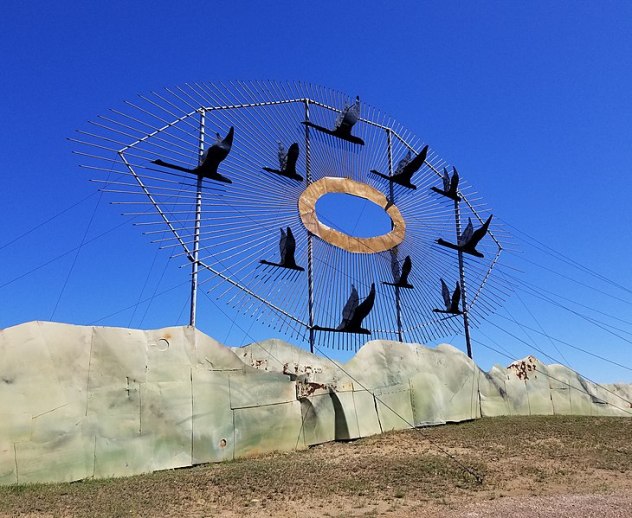 Gary Greff’s "Geese in Flight" sculpture, which stands at 110 feet tall and 150 feet wide and weighs more than 70 tons, was recognized by the Guinness Book of World Records. It sits along The Enchanted Highway in North Dakota. (Wikimedia Commons)

“I never laid a bead of weld of my life until I started the project, never had an art class, [but] I said let’s go for it. I’ve now designed seven of the world’s largest sculptures, [and am] working on sculpture number eight,” Greff told AccuWeather in 2019.

Greff specializes in folk art that reflects aspects of the regional culture or wildlife. As such, his sculptures depict local wildlife, ranging from pheasants to deer, and historical figures, such as Theodore Roosevelt. 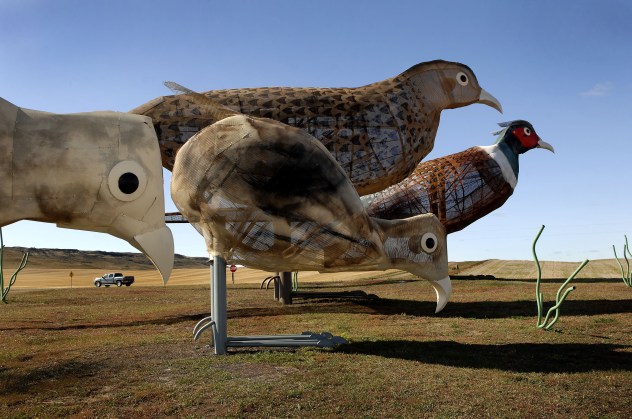 While The Enchanted Highway and its remarkable sculptures attract thousands of tourists each year, Greff still isn’t satisfied. The Enchanted Highway ends at the associated souvenir shop and cafe on the town’s main street, but once travelers stop in for an ice cream cone and their tchotchkes, they head out on the road again, without spending much more time or money in Regent. And while many national travel publications have covered The Enchanted Highway, they don’t often encourage tourists to stick around in Regent.

This, though, is just Greff’s next challenge. His current sculpture-in-progress, a gargantuan fire-breathing dragon and knight in shining armor, stands outside The Enchanted Castle -- a hotel, tavern and steakhouse founded by Greff in an attempt to keep travelers in town overnight. When the new sculpture is finished, it will lead tourists on The Enchanted Highway all the way through Regent and right up to its gates.

But finishing the sculpture is easier said than done. “It takes roughly six years to do one sculpture,” said Greff. He hopes to complete three or four additional sculptures in his lifetime. 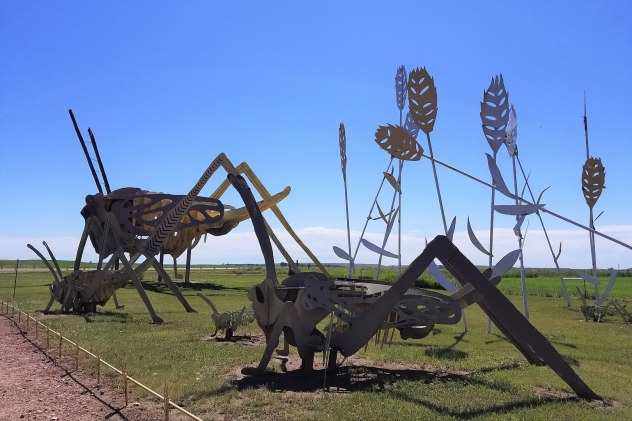 The long time-frame is mostly related to cost, as Greff funds The Enchanted Highway entirely on his own and does all of the work himself. He can't afford to hire an additional welder.

“I can raise roughly $10,000 per year [for the sculptures] at the gift shop [and] it takes $60,000 to $70,000 to complete a sculpture,” he explained. Part of those funds also go to sculpture upkeep, as Greff says the strong winds and harsh North Dakota winters take a toll on his artwork.

Still, Regent is in a better spot now because of Greff’s efforts.

He said: “[Travelers] are coming for The Enchanted Highway because there’s nothing else in Regent.” 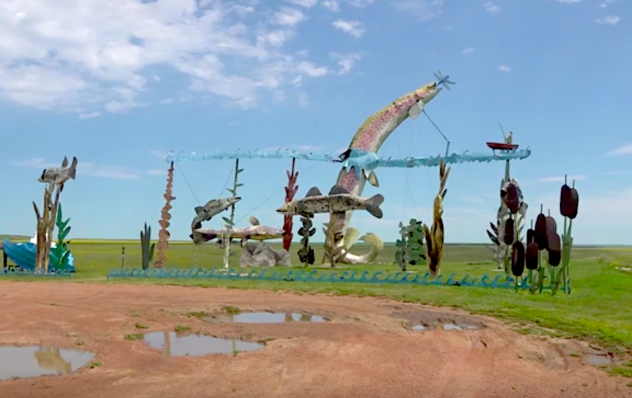