The year was 2007 and the tennis phenom went down with a career-threatening injury at Wimbledon. But then the weather suddenly changed and, after the match, Williams credited it with helping her stage an incredible comeback. 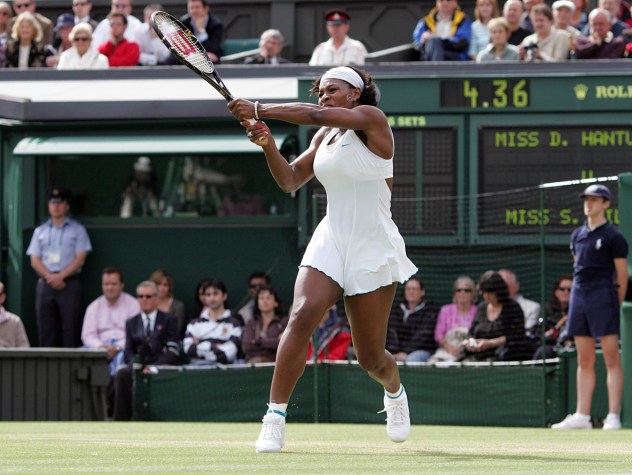 Serena Williams in action against Slovakia's Daniela Hantuchova during The All England Lawn Tennis Championship at Wimbledon in July 2007.

"Uh-oh. Serena Williams is down," declared ESPN broadcaster Dick Enberg as the tennis great collapsed to the grass surface at Wimbledon's Centre Court.

Gasps could be heard coming from shocked spectators at the otherwise hushed All England Club. Venus Williams, her sister, used both hands to cover her mouth after her jaw dropped at the unforeseen turn of events.

The year was 2007 and Williams, 25 years old at the time, was facing Daniela Hantuchova of Slovakia in a fourth-round matchup. Williams, vying for her third career Wimbledon title, was losing to Hantuchova when a terrible cramp developed in her left calf. The injury was so extreme that it could be seen on TV as cameras zoomed in on her calf, which had become completely rigid. Williams winced in pain as a trainer attended to her.

At that point, Williams was one of the sport's bona fide superstars but was still building what is now a legendary professional resume. She is one of the most decorated tennis players to ever live, winning over 800 matches, 73 singles titles and 23 doubles titles throughout her career, according to the U.S. Open's website. Earlier this month, the tennis icon announced her retirement in an essay written for Vogue magazine.

Williams said the decision to retire was an excruciating one and came down to a decision between the sport she loves and her family.

In Vogue’s September issue, @serenawilliams prepares to say farewell to tennis on her own terms and in her own words. “It’s the hardest thing that I could ever imagine,” she says. “I don’t want it to be over, but at the same time I’m ready for what’s next” https://t.co/6Zr0UXVTH1 pic.twitter.com/YtGtcc18a9

In the same essay, she said her appearance at the 2022 U.S. Open, which began on Aug. 30, would be her final tournament as a professional tennis player.

"I feel a great deal of pain," she wrote in the Vogue piece and added that the decision to retire was "the hardest thing that I could ever imagine."

Over the course of her illustrious career, pain is something the tennis legend once overcame on what is perhaps the sport's biggest stage.

On that fateful July day in 2007, Williams struggled with a painful injury that brought play to a stop and looked like something that even a competitor of her caliber wouldn't be able to play through. Even with the help of her medical team, she could barely stand, let alone compete against one of the world's best players. 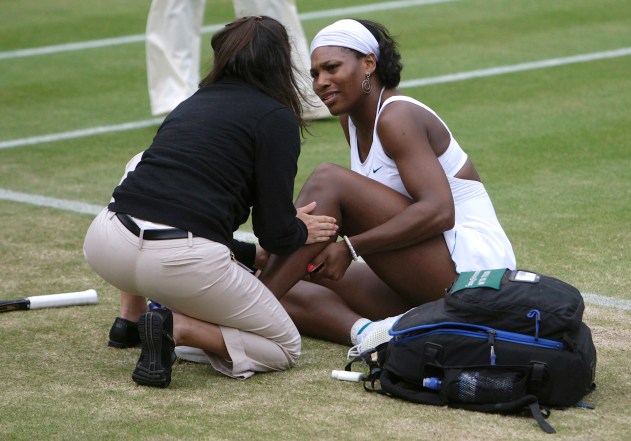 Serena Williams of the U.S. receives treatment on the court during her match against Slovakia's Daniela Hantuchova at the Wimbledon tennis championships in London, July 2, 2007. REUTERS/Eddie Keogh (BRITAIN)

Not only was the injury an ominous sign for her fate at the tournament, but the skies had taken on an ominous look as storm clouds rolled in. During a medical timeout, Williams stretched the injured calf and a trainer wrapped it in athletic tape.

Despite the injury, Williams persisted, wiping away tears as she battled through the pain with a grimace on her face, before miraculously winning two points post-injury. After playing for 11 minutes on an injured calf, Williams was able to take a much-needed break thanks to elements out of her control.

The sky opened up and rain started to fall on the outdoor court, forcing officials to suspend play for nearly two hours -- valuable time that Williams and her trainers could take advantage of to tend to her injury.

"I cannot believe it," Enberg marveled as the rain picked up and forced play to be halted.

As the rain let up, spectators and commentators anxiously waited to see Williams return to the court nearly two hours after the first drops fell. When Williams emerged from the locker room, she was seen walking with a bit of a limp and there were doubts about how she would play after sustaining a significant injury, one that she was advised during the rain delay could be career-threatening.

Still, nothing could stop her from putting on the performance of a lifetime. 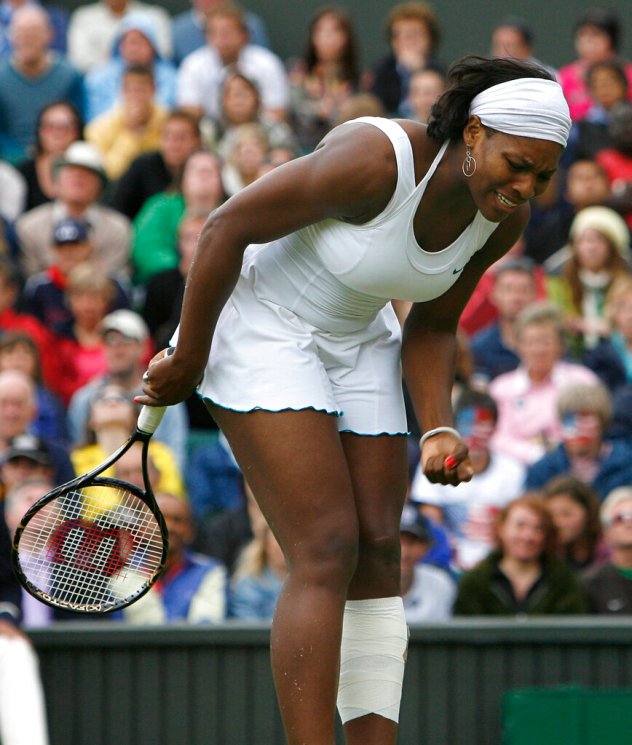 Serena Williams, her calf bandaged following a cramp, reacts as she plays Daniela Hantuchova, during a Women's Singles match on the Centre Court at Wimbledon, Monday, July 2, 2007. (AP Photo/Anja Niedringhaus)

As the intensity of the match rose, so too did Williams' ferocity -- she frequently yelled "come on!" as she slammed the ball across the court and mounted a comeback that was described as the most dramatic of her career up to that point.

"I was going to die trying," Williams said of her decision to resume playing despite the injury and after the lengthy delay. "I figured my heart wouldn't give out, so I had a good chance of making it."

Against all odds, Williams' heroic effort propelled her past her injury and past her opponent.

"We are seeing something incredibly special," Enberg exclaimed as the match neared its end.

"These hallowed lawns have seen courageous performances through the years," Enberg told viewers. "And Serena Williams' effort will deserve a place in the very best."

In the stands, Williams' father, Richard Williams, cheered on her improbable comeback as he documented the moment with a home video camera.

Williams thought about dropping out of the match for only a few fleeting seconds as she endured the worst pain of her life to that point -- and she explained what drove her after the win. 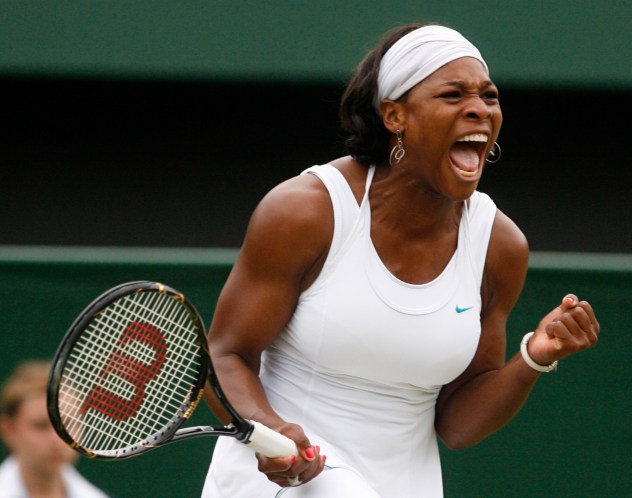 Serena Williams reacts as she wins a point on her way to defeating Daniela Hantuchova in their Women's Singles match on the Centre Court at Wimbledon, Monday, July 2, 2007.(AP Photo/Anja Niedringhaus)

"I thought about not finishing, but very briefly. I thought I wouldn't be able to live with myself if I hadn't at least tried," Williams said. "I've never dealt with such pain. I can't believe -- I can't believe I won, really.''

"It's so hard to play against somebody that is struggling, and you kind of feel sorry," Hantuchova said. "I lost it. I had my chances."

Both players seemed to recognize the role the weather played that day.

"I was definitely saved by the rain," Williams told reporters at a post-match press conference. "I couldn't move before the rain. Just everything stopped."

Williams' bid for what would've been her third career Wimbledon title at the time ended with her next match in the quarterfinals against Justine Henin, who was the top seed in the tournament. She would eventually become champion at the All England Club five more times throughout her storied career.

However, Williams was able to cheer on her sister, Venus, who ultimately won the 2007 tournament, the fourth Wimbledon singles championship of her own decorated career.

Watch dramatic highlights from that incredible comeback in the video below.

Mesmerizing clouds form over the Rock of Gibraltar