That’s how tourists often describe the downtown area — that is, until they explore a hidden part of the city, one that has been made popular by its extreme weather.

A network of underground tunnels stretching more than 6 miles allows Houston’s workforce to move about the city avoiding the heat and rain.

It’s lunchtime in Houston, yet there is seemingly no traffic in the city’s urban core. Pedestrians aren’t rushing past each other, and few cars dot the city’s roads. The more than 2 million people who live in the city have seemingly vanished in the blink of an eye. So, where did everybody go?

“When people come to Houston, and see downtown Houston, they’re amazed by the buildings, but they wonder where all the people are," Stephen Fox, an architectural historian and lecturer at Rice University, told Reuters. “And you have to come and explain that there are alternatives to the sidewalks in Houston.”

According to the City of Houston, the tunnels began as a way to connect two downtown movie theaters. Over time, the operation significantly expanded, creating the large underground cityscape you can now visit today, assuming you can find one of the staircases and elevators that take you to the subterranean downtown.

“Tourists tend not to find the tunnel system. They tend to walk around street level, looking for where everything’s at," Vanessa Lopez, a tour guide with Houston's Astroville Tours, said. "Lots of people will mention before joining us on tour that downtown Houston looks like a ghost town."

Areas in the tunnel closer to Buffalo Bayou, the slow-moving waterway that bisects the city, are especially prone to flooding, Lopez explained.

The tunnels have flooded during tropical systems in the past. Tropical Storm Allison in 2001 flooded several parts of the tunnel, disrupting the worst-hit businesses for months, according to a report by the city. The tunnels ended up serving as "an effective conduit" for floodwaters, taking on some of the water that might have otherwise flooded downtown. 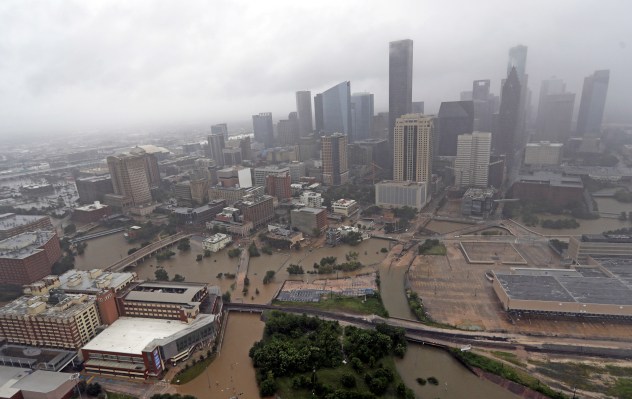 In this Aug. 29, 2017, file photo, highways around downtown Houston are empty as floodwaters from Tropical Storm Harvey overflow from the bayous around the city in Houston. (AP Photo/David J. Phillip, File)

Houston is considering building more underground tunnels -- tunnels that would not be for shops and businesses but for the sole purpose of storing water when wet tropical systems like Allison or 2017's Hurricane Harvey hit the area, according to The Texas Tribune.

Houston’s weather is notorious for being extreme due to stifling humidity levels and tropical downpours that pop up over the city — and it is the nasty weather conditions that make the current tunnel system so popular.

In the summer, Houston’s average high temperature in late July and early August, the hottest time of the year, is 96 degrees Fahrenheit, with AccuWeather RealFeel® Temperatures regularly climbing into the triple digits due in part to the persistent humidity.

Lucia Herron, a shopkeeper who owns GreenWorks Flowers, a floral shop located in the tunnel, said Houston's less-than-ideal weather makes the tunnel system a popular place for the city's residents.

“Too much rain or too much heat is what makes these types of places functional for everyone,” Herron said. “So it’s fabulous to have the tunnel, it allows them to communicate between buildings, for the food, for the gifts, for anything they need, because if you go through the tunnels, you have anything you need.”