It's a structure so vast that the Statue of Liberty could fit inside -- but above ground, there's almost no sign that something so enormous lies beneath.

Beneath Tokyo, Japan, lies a massive complex that is designed to protect the city from major flooding events.

Whether it's the result of a powerful typhoon, or simply a long-duration rain event during Japan's wet season, flooding in Toyko is an all-too-common occurrence. However, when it comes to cleaning up from major flooding events, the city has a secret weapon of sorts at its disposal that can help recovery from catastrophic flooding go much smoother.

After 10 years of construction at a cost of nearly $2.2 billion dollars (230 billion yen), a revolutionary world-class flood control system in Japan has helped reduce the number of homes affected by water damage in nearby areas such as Kasukabe, a city located in Saitama Prefecture, Japan, by around 90 percent, Nobuyuki Akiyama, director of Kasukabe drainage infrastructure said.

Official studies estimate that the immense structure, called Japan's "underground Parthenon" because of a resemblance to the ancient Greek temple, has saved 148 billion yen ($1.4 billion USD) in disaster cleanup costs since 2006.

Completed in 2006, the cavernous complex has already been used more than half a dozen times this year by funneling away and redirecting excess water from storms and typhoons, protecting one of the globe's most heavily-populated cities. 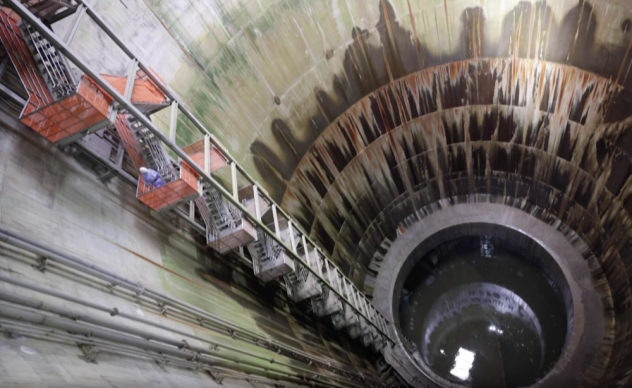 A view looking down the enormous tunnel leading to the Metropolitan Area Outer Underground Discharge Channel, a facility also known as the "Underground Temple" or "Underground Parthenon," which is credited with dramatically improving flood mitigation in Japan over the last 15 years. (AFP)

The colossal structure, which resembles a bare concrete tank the length of two football fields, is supported by gigantic pillars weighing 500 tons each.

“To give you an order of magnitude, we could put a rocket or the Statue of Liberty in it,” Akiyama said, according to AFP News.

"When we compare the damage after heavy rains of the same magnitude before and after the construction of this infrastructure, we see that the number of affected homes has decreased by 90%,” Akiyama said, according to AFP. 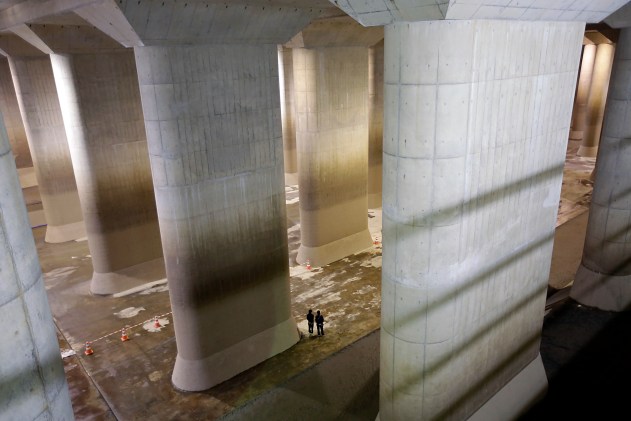 Workers walk through the main water tank in Kasukabe, Saitama, north of Tokyo. The facility also is known as "Underground Temple" or "Underground Parthenon," is one of the largest underground discharge channels to control floodwater in the area. The main water tank is supported by 59 concrete pillars each weighing 500 tons. (AP Photo/Eugene Hoshiko)

The idea behind the system in Tokyo deviates from some of the accepted flood mitigation approaches used in the United States and elsewhere around the world.

“The Parthenon, a remarkable feat of engineering, is an example of a different philosophy from levees, dams, floodwalls (LD&F) in the U.S.," Sandy Rosenthal, the founder of levees.org, told AccuWeather in an interview. "The Parthenon is built with the expectation that floods will come and Tokyo must accept its inevitability, live with it and prepare for it. In contrast, LD&F represents a different philosophy, namely where the engineers fight the water, refuse to live it and attempt to keep it completely out.” 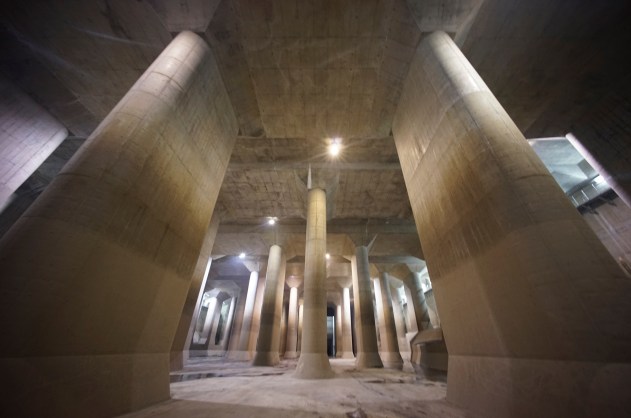 The main water tank of the Metropolitan Area Outer Underground Discharge Channel is seen in Kasukabe, Saitama, north of Tokyo. Tokyo has a long history of flooding. Since the 16th century, people have tried to control city floodwaters through building barriers and diverting river courses in the Japanese capital -- and today those efforts continue. (AP Photo/Eugene Hoshiko)

According to Rosenthal, there was once a time when engineers in the Netherlands thought they could control nature and build defenses.

“On January 31, 1953, their flood dikes (levees) breached in 67 places. Since then, the Netherlands has changed its philosophy to something similar to Toyko and its Parthenon," Rosenthal said. "But the U.S., at this time, is still stuck in the LD&F philosophy.”

Rosenthal acknowledged there are few places in the world that could support something like a Parthenon. Yet, above ground, there is little that shows the largest facility of its kind in the world exists below.

The cathedrallike feat of engineering is connected to a tunnel 3.9 miles long and equipped with a system that can discharge the equivalent of an 80-foot swimming pool into the nearby Edogawa River every second. 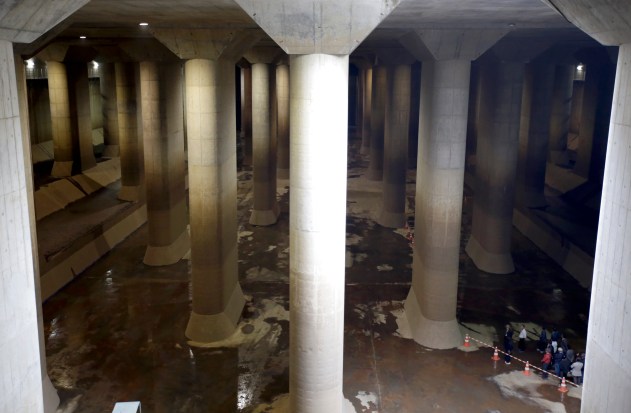 Excess water flows in automatically, and operators pump it out from the main tank when it approaches capacity, Akiyama said.

In Tokyo alone, a city crisscrossed by more than 100 rivers, there are 10 other underground reservoirs and three flood tunnels.

Staff at the facility in Saitama, north of Tokyo, are on constant alert, especially during Japan's rainy season from June to late October.

"In this area, torrential rain, typhoons and even daily rainfall can cause damage by submerging houses and roads," Akiyama told AFP.

Deadly typhoons in recent history have triggered a national awareness in Japan and resulted in the construction of large infrastructure projects to reduce future flood risks.

“Japan is frequently impacted by typhoons each summer through early autumn, and this is one of the main reasons it floods so often there," AccuWeather Meteorologist Brett Rossio said. "Another issue lies with regards to Tokyo Bay, where water often piles up with significant storm surge from typhoons that make landfall just to the southwest of Tokyo,”

“We can actively see that the number of tropical cyclones continues to increase as our global temperature rises and the climate dramatically changes as a result,” Rossio said.

Others are under construction, such as in Osaka, where a facility similar to the Kasukabe reservoir is due to be completed in 2044, at a cost estimated at 366 billion yen (3.4 billion euros).