Two teams with weather-themed nicknames are set to battle for Lord Stanley’s Cup. Here's how the two cities' weather compares in a head-to head-matchup -- and why the date May 21 is significant for the Avalanche. 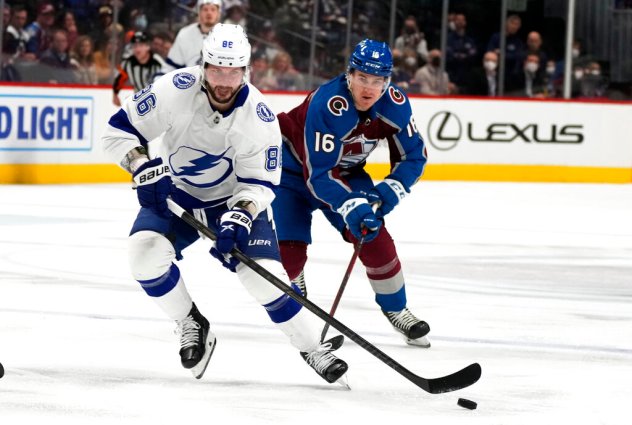 The Colorado Avalanche and Tampa Bay Lightning have both punched a ticket to the Stanley Cup Final after a hard-fought NHL season.

The two teams have a lot in common -- from winning their respective conferences to sweeping at least one of their playoff series and having a weather-related team name. However, there is one drastic difference between the two teams -- their respective home city's climate.

The Colorado Avalanche call Denver home, a city that is no stranger to bitter cold, snowy winters and dry, warm summers. The snow season in the Mile High City is so long that it can span almost the entire length of the NHL regular and post-season, which runs from early October to mid-June.

On average, Denver measures its first snowfall on Oct. 18, but has measured snowfall as early as September, as was the case on Sept. 8, 2020. Historically, the last snowfall for the city is April 28, but it's not uncommon for snow to fall in May. The Mile High City has even recorded snow in June multiple times.

The last time the Avalanche won the NHL's Western Conference was May 21, 2001, against the St. Louis Blues -- it snowed an inch in Denver that day. Twenty-one years later, Denver recorded its last snowfall again on May 21 and won the Western Conference about a week later.

While Colorado experiences a steady wealth of snow and freezing temperatures, Tampa, which is 1,500 miles to the southeast of Denver, enjoys more comfortable year-round temperatures. It has been more than four years since Tampa last recorded temperatures below freezing. Meanwhile, Denver recorded a temperature of 7 degrees below zero F or colder four times so far in 2022.

To go back to the time Tampa last had snow on the ground requires looking back much farther than four years. The last time this Florida Gulf Coast city saw any measurable snowfall was more than 45 years ago when a tenth of an inch of snow blanketed the area on Jan. 19, 1977. 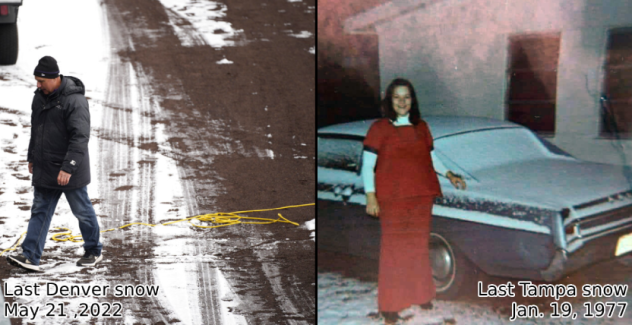 It's not just the winters that have such a drastic difference. June has quite a contrast as well for these two championship-bound cities. Tampa often swelters in humidity, which averages 74% in June. Denver has a much drier climate, which has an average relative humidity of just 48% during the month.

Average temperatures throughout the month also contrast quite a bit, and while high temperatures for both cities average in the 80s F, the low temperatures differ much more significantly. Tampa tends to experience warm summer nights in the mid-70s while Denver dips into the low 50s overnight. 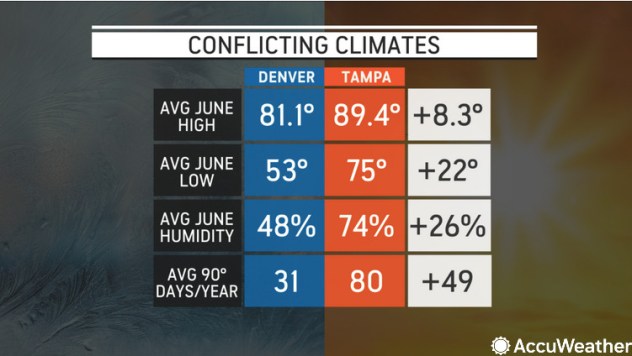 When comparing the number of 90-degree days each city averages a year, Tampa nearly triples Denver's total. While the Mile High City reaches the 90-degree mark about 31 times a year, Tampa far exceeds that amount with 80.

It's not just the temperature that differs between the two areas -- extreme weather also separates the two climates. From 1950-2020, Denver County has reported 18 tornadoes, while Hillsborough County, where Tampa is located, blows past that number with 150 total reports.

Tampa, like much of Florida, is also prone to hurricanes. Since 1986, Hillsborough County has been under two hurricane warnings and 12 tropical storm warnings. Denver County, not surprisingly, has had zero.

Both the Avalanche and Lightning are named after weather events that take place off the ice. Both avalanches and lightning occur in Colorado, but you'll only find lightning in the Sunshine State. Florida certainly lives up to the team's name. The state ranks just about at the top of the list for lightning density, which historically has earned it the dubious title "lightning capital of America."

Game 1 of the Stanley Cup Final begins June 15 in Denver, where fans outside Ball Arena can expect high temperatures in the upper 80s. The Colorado Avalanche finished the regular season 56-19-7 while the Tampa Bay Lightning finished 51-23-8. Despite having fewer regular-season wins, the Lightning are coming off two straight Stanley Cup Final wins and the Avalanche are looking for their first title since 2001.