Which sports team has the best weather-inspired nickname?

The weather has long been a popular concept for sports teams to create an identity around. Many organizations evoke their city's culture or history with the name, but a slew of others have drawn inspiration from weather elements, which are often a unique characteristic of that city's place in the world.

There is no shortage of franchises that have weather-inspired names and logos displayed on uniforms, arenas and fan merchandise. College teams, professional teams and those in the minor league ranks all have them -- why doesn't everyone, we wonder? Some have even given their mascots names based on the weather. 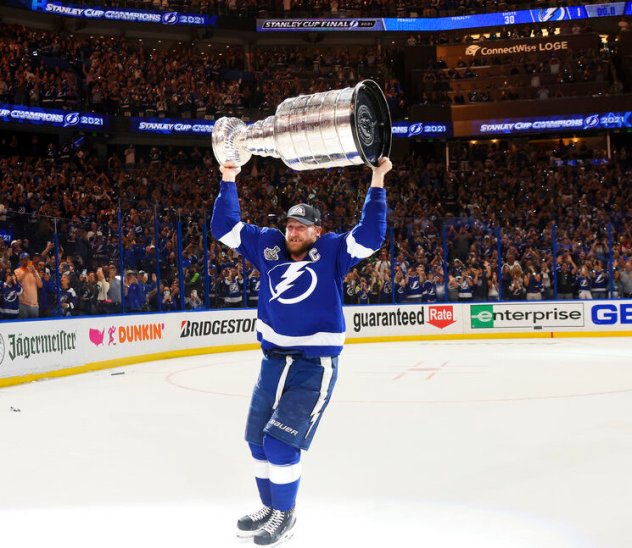 Below is a roundup of some of the best: 13 weather-inspired teams selected from across the sports world. But as is the case in competitive sporting events, there must be a winner and a loser. That's why we've decided to leave it up to AccuWeather readers and put it to a vote: Which team has the best weather-inspired nickname? Leave your vote in the comments below the story.

The Lightning entered NHL with the 1992-1993 season, and since then, the "Bolts" as they are also known, have claimed three Stanley Cup titles. Two of those titles have come in the past two seasons, as the Lightning became only the ninth team in league history to claim back-to-back Stanley Cups.

Franchise founder Phil Esposito was the one who came up with the Lightning moniker.

According to NHL.com, Esposito was at a friend's house for dinner when a thunderstorm rolled into the area, sending bolts of lightning crackling across the sky. Esposito had been considering several other team names, including the Oceanics and Pelicans. It was at that dinner, however, that his friend's mother suggested naming the team the Lightning. The name stuck.

And it's an appropriate one. Florida gets frequent thunderstorms and annually records some of the highest numbers of lightning strikes and lightning-related deaths per year.

Formerly the Hartford Whalers, the franchise relocated to Raleigh, North Carolina, in 1997 and has won one Stanley Cup in its time representing the Carolinas.

This team is also aptly named. Hurricanes frequently batter the Carolinas. The most recent storm to impact the region was Hurricane Florence, a devastating storm that made landfall in September 2018 and triggered widespread flooding that lingered for weeks.

The Avalanche moved to Denver in 1995 after previously existing north of the border as the Quebec Nordiques. Since the club's relocation to the Mile-High City, they've clinched two Stanley Cup titles.

Avalanches are forces of nature that are not to be trifled with. An average of 27 deaths have occurred in the U.S. each year over the past 10 winters, according to the Colorado Avalanche Information Center; however, some who were recently caught up in them have been lucky and emerged with remarkable survival stories.

The sultry conditions of South Florida can become stifling thanks to the high humidity levels in the region. Even though Miami has recorded a high temperature of 100 F on only one occasion, the city is one of the 10 hottest in the U.S. with a population of at least 250,000.

In the winter, temperatures regularly settle in the 80s.

The Heat have won three NBA titles since the team joined the NBA in 1988.

The greater Phoenix area is commonly known by locals as "The Valley of the Sun," and the city itself has recorded some astounding record high temperatures well into the triple digits.

The all-time record high for any date in recorded history in Phoenix is a scorching 122 degrees, set on June 26, 1990. Prior to this year’s run to the Finals, which is the third appearance in the franchise’s history, the Suns were not exactly scorching when it comes to NBA Finals appearances. The team’s last Finals berth occurred in 1993 when the Charles Barkley-led squad lost to Michael Jordan’s Chicago Bulls.

Rumbles of thunder are an all-too-common occurrence in the Oklahoma City area, which is located in the heart of Tornado Alley and frequently experiences severe weather.

The Thunder began playing in Oklahoma City in 2008 after relocating from Seattle, where the NBA franchise was known as the SuperSonics.

The team chose the Thunder over several other nickname possibilities including Wind, Energy, Bison, Marshalls and Barons. Eleven years later, the franchise is still looking for its first title in Oklahoma City.

Thunder occurs as a result of lightning. It should be taken as a warning for those outdoors to seek shelter when a severe thunderstorm is in the area -- hence the phrase "when thunder roars, go indoors."

Omaha, Nebraska, sits smack in the heart of Tornado Alley, so storm chasing is a common pursuit in the area.

The storm chaser name was chosen for the Triple-A affiliate of the Kansas City Royals from among 1,500 total submissions sent in by fans during a two-month-long "name-the-team" contest in 2010.

"The team name recognizes the importance of weather in the metro area and across the state," Martie J. Cordaro, vice president and general manager of the team said at the time. "It also, in a whimsical way, pokes a little fun at the variety of weather we experience here."

The Dust Devils are the Class-A short-season affiliate of the San Diego Padres and play their home games in Pasco, Washington.

Dust devils are not an uncommon occurrence for Washington state. In fact, one occurred in the town of Zillah, in early May, causing several students to be rushed to a hospital after the dust devil lifted an inflatable bounce structure into the air.

Dust devils are vortices that are often the result of thermal uplift caused by variations between the surface temperature and the temperature of the atmosphere. Vortices can also be made of fire and steam.

The Storm has played in the WNBA since 2000 and won three championships. At home games, fans are frequently greeted by Doppler, their friendly mascot who is named after Doppler radar.

Seattle gets plenty of storms, and that was evident this past winter when it had one of its snowiest winters on record.

Iowa State University refers to its athletic programs as the cyclones, a name that dates back to 1895. It originated after the program upset Northwestern 36-0 in Evanston, Illinois. The next day, the headline in the Chicago Tribune read: "Struck by a Cyclone: It Comes from Iowa and Devastates Evanston Town."

While the school's logo is a tornado, cyclones today are more commonly thought of in the tropical sense, such as hurricanes.

The Heat aren't the only team with a weather-related nickname in Miami. Affectionately known by fans as "The U," the University of Miami's nickname is appropriate because the city has had its share of close calls as well as destructive strikes from hurricanes over time.

Most recently, the city was hit by strong winds and heavy rain from Hurricane Irma in September 2017. Millions were forced to evacuate ahead of the storm, turning downtown Miami into a ghost town.

Previously known as the Redmen, the university updated its nickname in 1994 at a time when schools around the country were becoming sensitive to team names referencing Native American culture.

St. John's officials settled on the Red Storm because it was distinctive and unique but also would help the school stay true to its tradition.

A new mascot was also brought into the fold. Its name? Johnny the Thunderbird.

The origin of the Golden Hurricane nickname for Tulsa University is said to go back to 1922. The head football coach at the time, Howard Acher, wanted to change the name from Yellow Jackets to something else. He first settled on "Golden Tornadoes" but realized the name had already been taken by Georgia Tech so he chose hurricane instead.

While hurricanes do not occur in the central U.S., tornadoes are very common occurrence in Oklahoma, and that is particularly true for the Tulsa region.

The Tulsa area can experience a type of storm complex known as a derecho, which is sometimes referred to as an "inland hurricane." Similar to hurricanes, derechos produce ferocious wind and torrential downpours.

Daily coronavirus briefing: Kids may be fully vaccinated by Christmas

1st of 2 possible nor'easters poised to drench NYC to Boston