The weather stole the headlines in Florida 45 years ago with a startling feat that has not been repeated to this day.

On the morning of Jan. 19, 1977, something very unusual happened in South Florida: It snowed.

Residents grabbed their film cameras to document the unusual event, and newspapers ran headlines in the biggest font they could muster. The Miami News even issued a special souvenir edition titled "The day that couldn’t happen: Snow in Miami!"

Other newspapers in South Florida were equally as exclamatory on the front pages. "SNOW! Flakes hit county for first time," the top headline on the Fort Lauderdale News front page screamed. "It's COLD, Snow Foolin'" the headline on the Palm Beach Post front page read.

On this day in 1977, snow fell in #SoFla for the first time in recorded history, from West Palm Beach to Homestead, and even across the Gulf Stream on Grand Bahama Island! If you saw it, please share your story with us! https://t.co/Wy1OtX9bZM pic.twitter.com/vZTWgMB0s7

Ken Wilde of the Miami Springs Historical Society and Museum remembers that day well. He told AccuWeather via a message on Facebook, "Our son Mike was 2-and-a-half years old and eager to go outside in the cold. He was thrilled to see the snow and make that snowball on the hood of our car."

What weather factors came together to cause this supremely rare historical occurrence?

An arctic cold front dove deep through the South into the Caribbean on Jan. 18, with a line of precipitation behind it. A high-pressure system over Louisiana pushed cold air in from Canada behind the front, bringing unusually frigid temperatures that helped turn the rain falling from the sky into snow.

According to the National Weather Service, the snow that day at the weather station in Hollywood, Florida, was the first ever recorded at that site, and the same was true at the Everglades National Park. Every weather station in northern and central Florida recorded snow, with two inches recorded east of Tampa in Plant City.

Jennifer Wrightsman told AccuWeather about a photo she had taken in Tampa on that fateful day.

“This was my mom [in the photo]; I was born 3 weeks later. These [photos] were my Dad's and I got all of his pictures when he passed," Wrightsman said. "He was from New Jersey and never thought he would see snow again!"

Snow flurries even fell in the Bahamas that morning, according to The Commonwealth of The Bahamas. 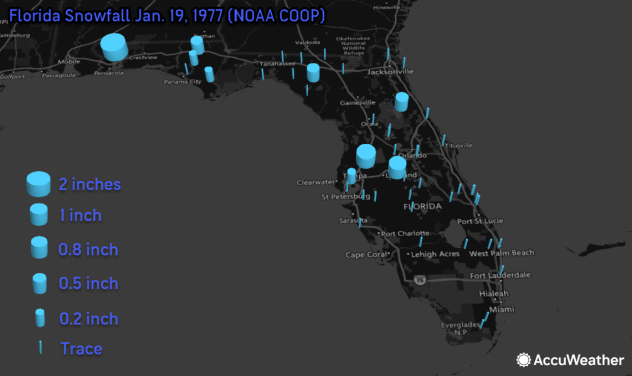 According to WeatherWise magazine, the day before the unlikely Miami snowfall, lawmakers were debating proposed changes to the Miami-Dade County's anti-discrimination law. In a show of how foreign the idea of genuine winter weather was to locals, one opponent of the proposed changes to the law declared, "When hell freezes over, gay rights will pass in Miami."

The next day, snow fell. The proposed change to the law was passed, according to WeatherWise, but then later repealed, which set off a decades-long battle over equal rights in the city.

And the following night, never mind hell -- Miami froze over as the temperature fell to 32 degrees Fahrenheit at Miami Beach, a record low-temperature reading which stands to this day, although it was tied in 1980 and 1989. West of Lake Okeechobee, the temperature dropped to 21 F in Labelle, Florida, a record that stood for 20 years.

A report from the National Climatic Data Center noted there was an unusually heavy frost, all the way to the coast, that caused $350 million in agricultural losses. As a result, newly inaugurated President Jimmy Carter declared 35 Florida counties disaster areas the next day. It was estimated that 95-100% of agricultural vegetables were lost, along with 50-75% of flowers, 40% of sugarcane, and 35% of the citrus crop. Overall, the freeze likely cost the state $2 billion, according to the National Climatic Data Center. 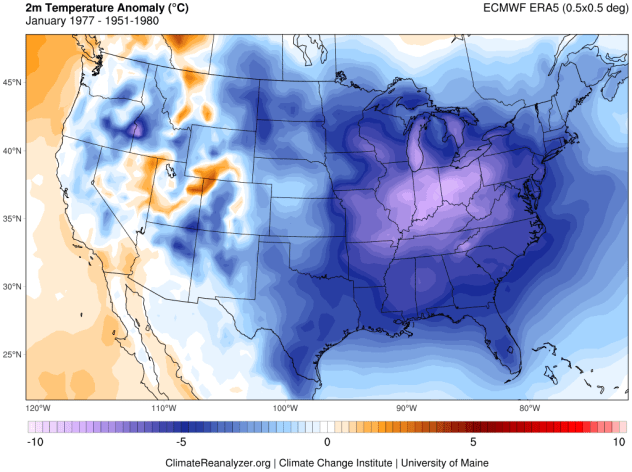 Surface temperature anomaly during January 1977, showing the eastern half of the United States 5 to 10 degrees below the 30-year average temperature. (University of Maine)

The cold snap was part of an unusually cold January across the eastern half of the nation that year. According to Chicago meteorologist Tom Skilling, the month was Chicago’s coldest on record, with the temperature never making it to the freezing mark. Pittsburgh also experienced its coldest winter season that year, with an average of 20.7 degrees Fahrenheit.

The snow that day was fleeting. According to local media reports, by 9:30 a.m., the sun came out and quickly erased any evidence of the wintry weather. To this day, South Florida has not had snow again, and because of climate change, the odds are against it happening again in the future.

'It was literally pouring snow': One unforgettable Groundhog Day