The Kalamazoo Wings have been using colorful ice for themed hockey games for years, but this year, they'll become the first team ever to paint the ice the colors of the rainbow. Here's how they do it.

The Kalamazoo Wings have been using a unique element at their hockey games for decades -- colorful ice. Now, after taking a hiatus due to COVID-19, the team has become even more ambitious and is set to be the first team to ever paint their ice a vibrant rainbow for an upcoming game in January.

"I grew up here, and it was one of these really cool things for the community," Will told AccuWeather Senior On-Air Meteorologist Adam Del Rosso on AccuWeather Prime. "And then I started to work for the team, and we slowly started to add different colored ices to our portfolio." 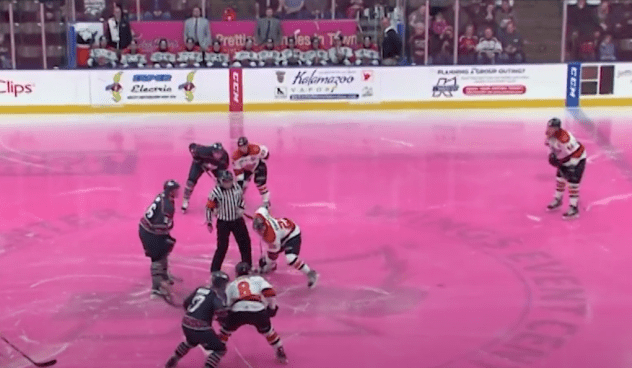 The rainbow ice game will be played on Jan. 7, and the team's general manager Toni Will said the day should have suitable weather conditions for the ice. (Kalamazoo Wings)

After decades of the Wings using colorful ice, Will was the one who had to idea to finally make a rainbow on the ice rink. The idea initially came to her three or four years ago, and the idea was set to come to fruition in the 2021 season -- until COVID-19 threw a wrench in their plans.

"The pandemic really put a pause on it," she said.

"When the pandemic hit, we were dark in that season due to all the restrictions that were going on in our state," she explained. "So we had to wait that full year, and now we're able to bring it to life this year."

The rainbow ice is made using special paint that goes into the water. The crew members that paint the ice use a special map that indicates which colors go where on the rink.

"You know how you paint walls and you have to tape it off, it's very similar," Will explained.

They also have to be careful to make sure the red and blue lines across the rink are clearly visible to the players to abide by the league's guidelines.

"There's a lot of handywork that goes into it, and a lot of paint swapping out because of the different colors of the rainbow," Will said.

She explained that they spray the colors on with either the Zamboni or hand sprayers, then add a clear layer of ice on top. This way, when the players glide across the rink and scrape up the ice with their skates in the process, the colorful ice does not get scraped up.

In addition, when the Zamboni clears the rink of the "dirty ice," which is the scraped-up ice, it only clears the clear ice layer on top and the colorful ice is able to last through the game. 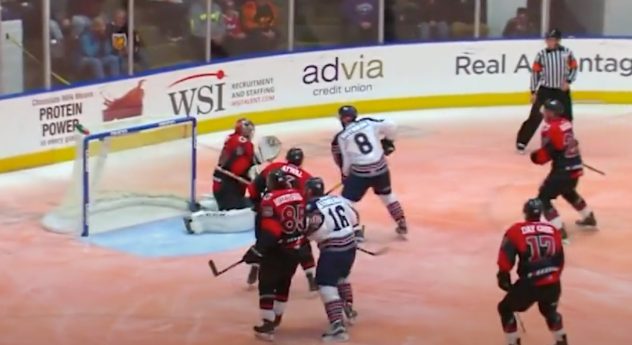 While the players skate across the ice, a layer of clear ice on top of the orange ice protects the color from getting scraped away. (Kalamazoo Wings)

In order to keep the ice in its best condition, the rink, along with all other rinks, has a cooling system designed to keep the floor at the needed temperature. Even though the game is played indoors, Will said the weather in Michigan usually accommodates them, but high humidity in particular "messes with the ice conditions and the cooling," which softens the ice.

"Where we run into trouble is months like October, and it's unseasonably warm here now, humidity tends to play a factor," Will said. "So we really have to take that into consideration when we're coloring the ice."

The team's first game with colored ice this season will take place on Oct. 30. Will said they are hoping the temperatures will drop by then so humidity will not be a factor. When the time comes for the rainbow ice game to be played in January, she said they don't expect the humidity to be an issue.

"Usually it's humidity that could get in our way," Will explained. "But in January, for this game on the seventh, we're gonna be good."