From a celestial gathering to one of the most popular meteor showers of the year, here are the top astronomy events to mark on your August calendar.

The nights are gradually getting longer in the Northern Hemisphere while the warm summer weather holds strong, the perfect combination for enjoying some time under the stars in August.

Comet NEOWISE stole the spotlight in the night sky in July, but has since faded away. Now skywatchers will be turning their attention to the middle of the month when one of the year’s top meteor showers reaches its climax.

Here are the top three astronomy events to look for in August:

The new month will kick off with a full moon illuminating the night sky on the night of Monday, Aug. 3.

People who set up telescopes to catch a look at Jupiter, Saturn and Comet NEOWISE throughout July can focus in on the moon to see its many craters as it shines bright in the sky all night long.

Other nicknames for this month’s full moon include the Blueberry Moon, the Full Green Corn Moon and the Dog Day’s Moon.

Near the end of July, two minor meteor showers peaked on the same night, giving stargazers a preview of August’s top astronomy event.

The Perseids is regularly one of the best meteor showers of the entire year, not only because it can feature a shooting star about once every minute, but also because the meteors are generally brighter than those from other meteor showers throughout the year.

“This year's Perseids will produce 50-75 meteors per hour on the peak night,” AccuWeather Astronomy Blogger Dave Samuhel said. “This number is down slightly from the normal 100-plus because moonlight will be a factor.” 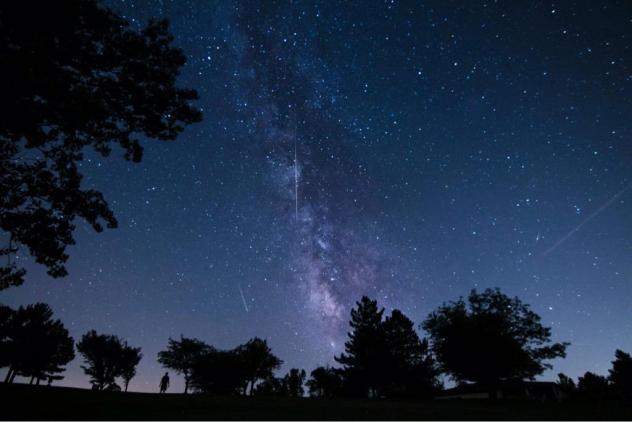 Meteors from the Persieds strat in front of the Milky Way during the shower's peak in 2015. (Twitter/@AaronRigsbyOSC)

The best time to watch the Perseids will likely occur between 11 p.m. and 1 a.m. local time, the darkest part of the night before the moon rises. Be sure to check AccuWeather.com and follow AccuWeather Astronomy on Twitter and on Facebook to see forecasts for viewing conditions in your area later in the month as the meteor shower approaches.

As the month draws to a close, Jupiter and Saturn will be prominently featured in the southern sky as darkness falls.

The nights of Thursday, Aug. 27 through Saturday, Aug. 29 will be good opportunities to look for the planets as the nearly full moon passes nearby. 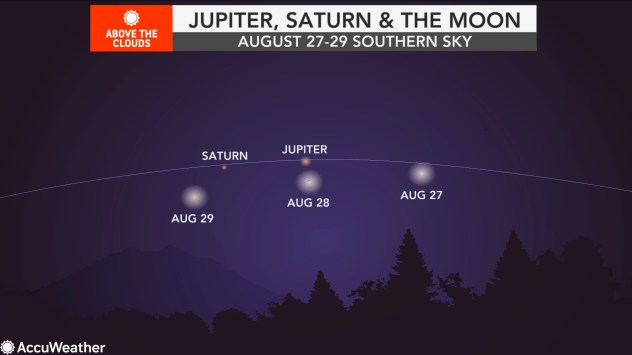 This has been a monthly occurrence throughout most of the year, but on the night of Friday, Aug. 28, the moon will appear in particularly close proximity to Jupiter. Onlookers with a telescope or good pair of binoculars may be able to spot Jupiter and its four largest moons in the same frame as our moon.

Looking back at July

July brought the rare opportunity to spot a comet in the night sky as Comet NEOWISE made its closest approach to the Earth and the sun in 6,800 years. It became just bright enough to see with the unaided eye, making it the brightest comet for stargazers in the Northern Hemisphere since Comet Hale-Bopp in the late 1990s.

One stargazer took advantage of this opportunity to get down on one knee and propose to his significant other.

As the comet faded on its trip back to the far reaches of the outer solar system, two meteor showers joined forces to put on a dazzling display in the night sky. The southern Delta Aquarids and Alpha Capricornids peaked on the night of Tuesday, July 28, into the early-morning hours of Wednesday, July 29, to treat stargazers with 15 to 20 meteors per hour.

Jupiter and Saturn also shined bright side-by-side all month with both planets reaching opposition, or the point in their orbits when they are closest to the Earth.

On the morning of July 30, NASA launched a new robot into space, a rover that is set to reach Mars in early 2021. This new rover is named Perseverance and is carrying a small helicopter that will be the first human-made object to fly on another world.