It's big and it's hiding in our galactic neighborhood, but the newly-photographed 'space spider' won't be paying Earth a visit anytime soon.

Lurking in the depths of the universe some 161,000 light-years away from Earth is a massive tarantula, but unlike the fright-inducing spiders here on Earth, this galactic spider gives birth to new worlds and possibly life itself.

NASA unveiled the latest images from the James Webb Space Telescope on Tuesday, which focused on the Tarantula Nebula, a mass of interstellar gas and dust home to countless stars. The nebula is 340 light-years across and is the largest and brightest star-forming region in the galactic neighborhood where the Milky Way resides.

"Nicknamed the Tarantula Nebula for the appearance of its dusty filaments in previous telescope images, the nebula has long been a favorite for astronomers studying star formation," NASA said. "The region resembles a burrowing tarantula's home, lined with silk." 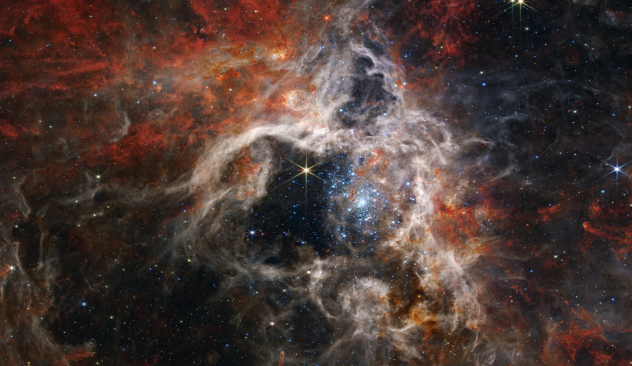 The Hubble Space Telescope has captured images of the Tarantula Nebula before, but the instruments aboard the JWST allow the new telescope to peer even deeper into the cosmic feature and reveal thousands of stars that the Hubble cannot see.

NASA combined the two telescopes' power to create breathtaking images of the nebula, a method scientists plan on using for future observations.

"Hubble and Webb will work together to showcase the universe across multiple wavelengths of light," NASA said. "Two space telescopes, twice the star power."

This #TransformationalTuesday, watch as @NASAHubble’s view of the Tarantula Nebula fades into Webb’s NIRCam, then MIRI instrument views. Hubble and Webb will work together to showcase the universe across multiple wavelengths of light. pic.twitter.com/GDIRSWWFQV

The Tarantula Nebula is more than a breathtaking celestial object to observe. This region of space serves as a cosmic nursery, giving birth to new stars on a frequent basis.

"One of the reasons the Tarantula Nebula is interesting to astronomers is that the nebula has a similar type of chemical composition as the gigantic star-forming regions observed at the universe's "cosmic noon," when the cosmos was only a few billion years old, and star formation was at its peak," NASA explained.

"This makes the Tarantula the closest example of what was happening in the universe as it reached its brilliant high noon," NASA added.

Some of these stars are likely home to planets of all shapes and sizes, some of which could even be similar to Earth and have liquid water, one of the ingredients for life as we know it.

The awe-inspiring photos of the Tarantula Nebula are the latest in a recent batch of images that the JWST has captured.

On Thursday, Sept. 1, NASA revealed an image that showed the telescope's first direct image of a planet outside of our solar system. The planet is 6 to 12 times more massive than Jupiter but is only 15 to 20 million years old, compared to Earth which is some 4.5 billion years old.

NASA also released a mesmerizing image of the "Phantom Galaxy" near the end of August, located 32 million light years away from Earth.