The Leonids have produced some of the most incredible meteor storms throughout history. Will that be the case in 2021?

Make sure you bundle up for a cool night under the stars for the peak of the Leonid meteor shower on Nov. 17-18. Here’s how you can catch some meteors under the stars.

The third and final meteor shower of November is about to reach its climax, an event that has become famous over the centuries for occasionally turning into an all-out meteor storm.

The peak of this year's Leonid meteor shower spans several days and will be best observed during the early morning hours of Wednesday, Nov. 17, and Thursday, Nov. 18. The Leonids are often an average meteor shower that offers about a dozen shooting stars per hour on peak night. But every so often, the celestial floodgates burst open, and the Leonids explode into a celestial waterfall with as many as 30 meteors per second.

The 1833 event is sometimes called “the night the stars fell” when as many as 100,000 meteors per hour fell from the heavens, according to EarthSky. This was the first recorded meteor storm in modern history. 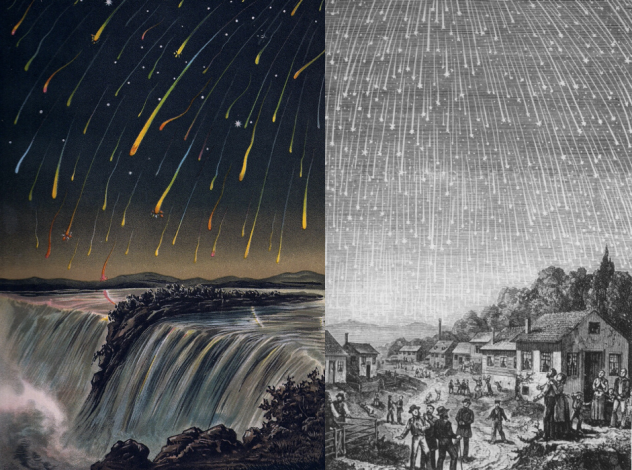 Leonid meteor storms can be a once-in-a-lifetime event as they only happen when the Earth plows through a fresh trail of debris laid down by its parent comet, comet 55P/Temple-Tuttle.

“Unfortunately, it appears that the Earth will not encounter any dense clouds of debris until 2099,” the AMS said.

That means closer to 10 to 15 meteors per hour are expected this year rather than a meteor storm of epic proportions.

The 2021 showing of the Leonids peaks just a few nights before the full moon. This means that a bright, nearly full moon will be glowing in the sky throughout most of the night, washing out some of the fainter meteors.

Onlookers could still spot some shooting stars despite the moonlight as the meteors associated with the Leonids are often vibrant. For the best chance to see a meteor, it is recommended to focus on a darker area of the sky away from the moon.

A few incredibly bright fireballs could also flicker in the sky from the Taurid meteor shower, which is active throughout all of November.

"Clear skies may stretch north into New England as well, but some clouds may move in as a storm approaches," Douty said. 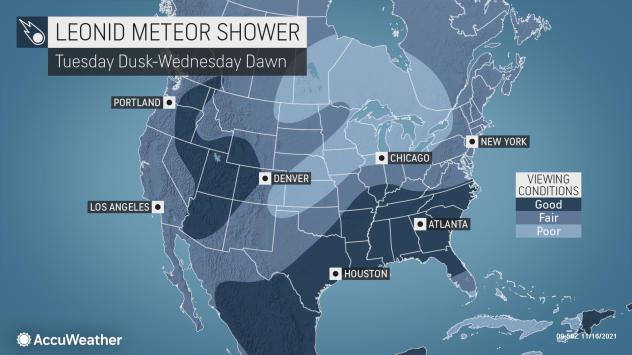 Conditions will be less favorable across parts of the Central states as a large cold front slices through the region. Poor viewing conditions are expected from around the Great Lakes and Upper Midwest, while conditions will be a little bit better in the Plains.

"A lot of the interior West, including the Great Basin, may have a mainly clear sky," Douty said. But lingering clouds across the Northwest and northern Rockies can lead to a mixed bag of viewing conditions, with some areas having breaks in the clouds and others remaining overcast, he added.

After the Leonids come to pass, there will be a brief pause in meteor activity, but good things come to those who wait.

The Geminid meteor shower in mid-December is considered one of the most active annual meteor showers. On the night of Dec. 13 into Dec. 14, rates could exceed 100 meteors per hour, according to the AMS.

Skywatchers will be sure to keep a close eye on the weather forecast as the Geminids approach, not only because of the cold December nights, but also because of the widespread clouds that often obscure the sky over North America this time of year.