Astronomers have been aware of the planet's Great Red Spot for more than 350 years, but until now have never had this in-depth of an understanding of what's going on inside it.

It’s the biggest planet in the solar system, but it might also be the most chaotic.

A new study of Jupiter's Great Red Spot has found that the unbelievably persistent storm, which has been observed for at least 356 years, is deeper than previously thought, UPI reported.

The meteorological phenomenon, which produces wind speeds that can hit up to 400 mph, nearly 200 mph stronger than Earth's most powerful hurricanes, has been found to extend up to 310 miles below Jupiter's cloud tops.

Scientists were able to make the new discovery after analyzing data from Juno, a NASA spacecraft that has orbited the solar system's largest planet since 2016.

"We knew it lasted a long time, but we didn't know how deep or how it really worked," said Scott Bolton, the principal investigator of NASA's Juno mission and director of the space science and engineering division at the Southwest Research Institute in San Antonio, according to CNN.

The scientists studying the data expected to find that the Great Red Spot would be relatively shallow. Instead, they were surprised to find the storm, which is shaped like a flat lens and is about 10,000 miles wide, extends beyond the depths that sunlight can penetrate. 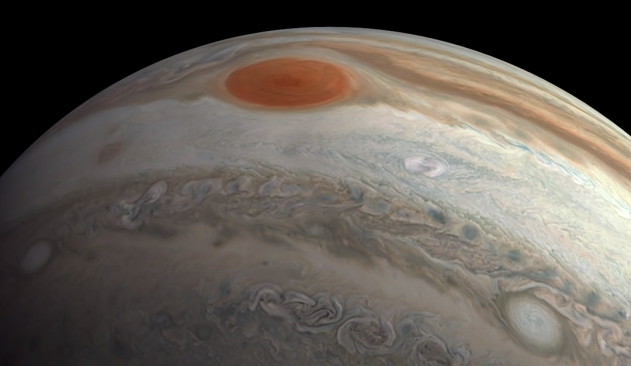 "The Great Red Spot is as deep within Jupiter as the International Space Station is high above our heads," said Marzia Parisi, a research scientist at the NASA Jet Propulsion Laboratory in Pasadena, California.

Another team of researchers created a three-dimensional map of Jupiter's atmosphere, giving scientists an "understanding of how Jupiter's beautiful and violent atmosphere works," Bolton said.

The researchers found that Jupiter's cyclones are warmer on top and colder on the bottom, while anticyclones, which rotate in the opposite direction as cyclones, are colder on top but warmer at the bottom. 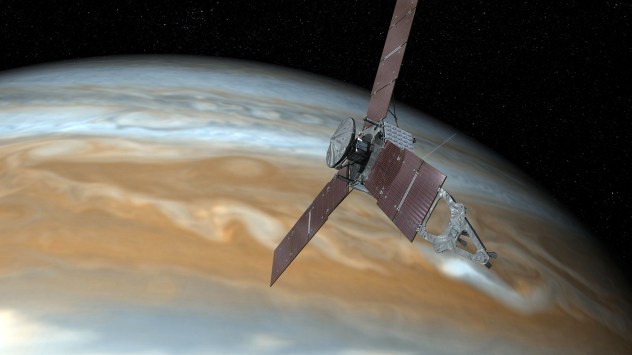 An artist's rendering of NASA's Juno spacecraft making a close pass over Jupiter. (NASA via AP)

Researchers of Jupiter have long been trying to solve the question of how the planet's jet streams form, with a potential clue discovered in this latest study.

“By following the ammonia [in Jupiter's atmosphere], we found circulation cells in both the north and south hemispheres that are similar in nature to ‘Ferrel cells,’ which control much of our climate here on Earth,” said Keren Duer, a graduate student from the Weizmann Institute of Science in Israel. “While Earth has one Ferrel cell per hemisphere, Jupiter has eight — each at least 30 times larger.”

The researchers also found a similarity between Jupiter's belts and zones, its distinctive white and reddish bands of clouds that wrap around the planet, and Earth's oceans. Data from Juno found that the belts and zones undergo a transition: At shallow depths, the belts are brighter in microwave light than the neighboring zones, but the opposite is true at deeper levels.

"We are calling this level the ‘Jovicline’ in analogy to a transitional layer seen in Earth’s oceans, known as the thermocline — where seawater transitions sharply from being relative warm to relative cold,” said Leigh Fletcher, a Juno participating scientist from the University of Leicester in the United Kingdom.