Sept. 22 (UPI) -- NASA's James Webb Space Telescope has sent back its first images of Neptune, the clearest photos of the eighth planet from the sun's rings in more than 30 years, the space agency said on Thursday.

The new images give a "crisp" view of the ice giant planet's rings, NASA said in a news release. 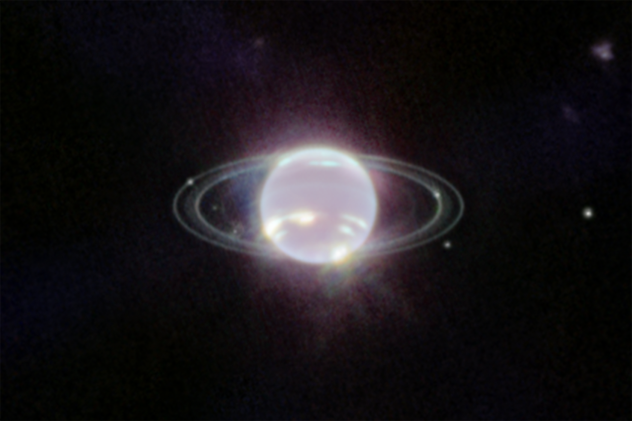 Webb’s Near-Infrared Camera (NIRCam) images objects in the near-infrared range from 0.6 to 5 microns, so Neptune does not appear blue to Webb. In fact, the methane gas so strongly absorbs red and infrared light that the planet is quite dark at these near-infrared wavelengths, except where high-altitude clouds are present. Such methane-ice clouds are prominent as bright streaks and spots, which reflect sunlight before it is absorbed by methane gas.

Some of those rings have not been detected since NASA's Voyager 2 became the first spacecraft to observe Neptune in 1989.

"It has been three decades since we last saw these faint, dusty rings, and this is the first time we've seen them in the infrared," James Webb interdisciplinary scientist Heidi Hammel said in a statement, praising the telescope's extremely stable and precise image quality.

Scientists have been limited to using ground-based telescopes to keep a close watch on the gaseous planet's temperatures. 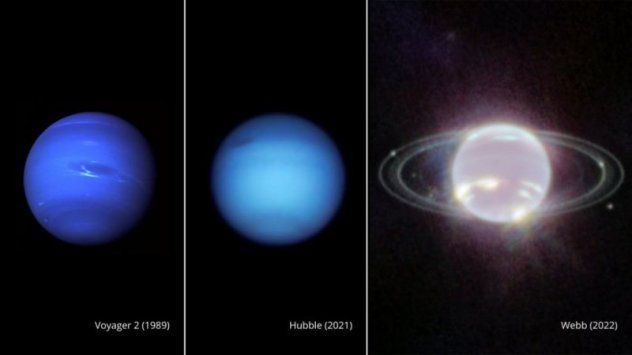 An image comparing three photos of Neptune, taken by NASA's Voyager 2, the Hubble Telescope, and most recently, the James Webb Deep Space Telescope.

The Webb images come as NASA troubleshoots a problem with the $10 billion deep space telescope. Scientists confirmed on Wednesday they temporarily paused further observations with the telescope after a problem was detected with one of its Mid-Infrared Instrument settings.

Neptune was first discovered in 1846, located 30 times farther from the Sun than Earth. It is one of two planets in our solar system referred to by scientists as an ice giant, the other being Uranus.