The night of Dec. 13-14 is the peak of the Geminid Meteor Shower, arguably one of the best showers of the year with 150 meteors per hour.

As the year nears its close, many people are already looking ahead to 2020, but stargazers remain focused on 2019 as one of the year’s top meteor showers is about to put on a dazzling display in the night sky.

“Arguably the best meteor shower of the entire year peaks on Friday night into the early hours of Saturday morning,” AccuWeather Astronomy Blogger Dave Samuhel said. “The Geminids shower is just as or slightly more active than the Perseids meteor shower of August.”

This meteor shower in particular is a good one for younger children that cannot stay up late into the night.

“The Geminids are unique in the fact it produces a large amount of meteors during the evening,” Samuhel said. Hourly rates will gradually increase as the night transpires, with the number of Geminid meteors streaking across the night sky expected to climax after midnight. 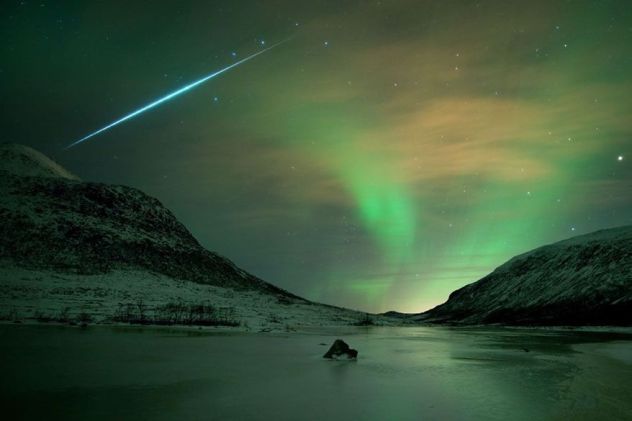 Nature’s ‘light show’ is how NASA describes the Geminid meteor shower – a meteor flash is seen here with an aurora borealis shimmer in Norway. (NASA)

The 2019 showing of the Geminids may bring as many as 150 meteors per hour, according to the American Meteor Society (AMS), but onlookers should tamper their expectations as the shower peaks the night after December’s full Cold Moon.

An abundance of natural light pollution from the moon will wash out the dimmer meteors, reducing the number of meteors visible per hour from over 100 to a few dozen. However, even the anticipated diminished rate of visible meteors is higher than many meteor showers throughout the year.

Not only are the Geminids known for their impressive numbers, but also their bright, multi-colored meteors. Onlookers should be able to see these shooting stars in areas of the sky away from the full moon, as long as Mother Nature cooperates. 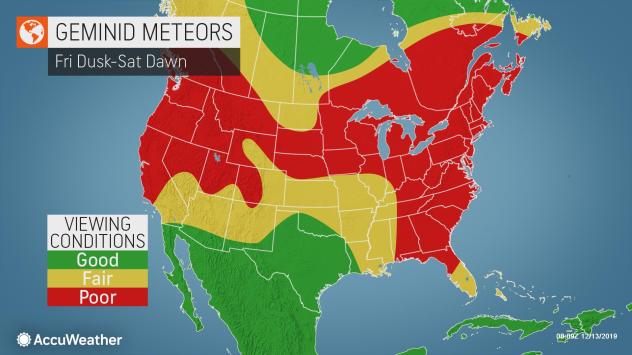 “A storm will bring widespread clouds to the eastern third of the country,” Samuhel said. The storm will also spread widespread, disruptive clouds over much of Ontario, Quebec and Atlantic Canada.

Cloudy conditions could interfere with the celestial display across parts of the north-central and northwestern U.S., but a few breaks in the clouds may allow determined stargazers to glimpse a few shooting stars.

The best viewing conditions are expected from Southern California through the Four Corners region and into the southern Plains. 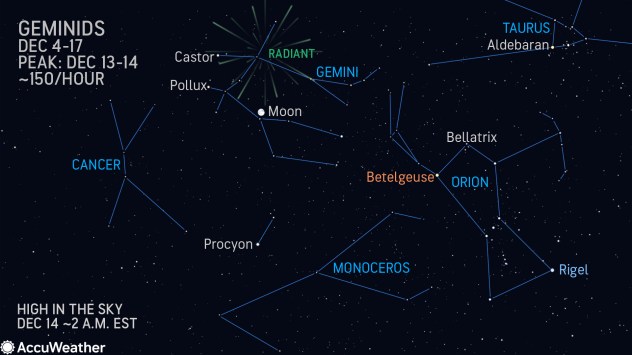 Folks that miss out on the Geminids this week will have one more opportunity to see a meteor shower before the end of the year.

The night of Saturday, Dec. 21 into Sunday, Dec. 22, is the longest of the year for the Northern Hemisphere and will feature the peak of the Ursids. This is a minor meteor shower, only bringing about 10 meteors per hour, but will not be contested by the moon, allowing for great viewing conditions.

Looking ahead to 2020, the Geminid meteor shower should be significantly better than this year’s showing, falling just one night before the new moon. This will allow for people in dark, cloud-free areas to experience the best that this meteor shower has to offer.