Catch the rise of the Hunter's Moon on the night of Oct. 20. It gets its name from farmers who turned to hunting after the harvest to stock up on food.

The first full moon of astronomical autumn will rise in the middle of spooky season, less than two weeks before ghosts and ghouls go trick-or-treating to collect Halloween candy from their neighborhoods.

The previous full moon rose on Sept. 20, just two nights before the equinox which marked the official start of astronomical fall across the Northern Hemisphere. It was also the Harvest Moon, one of the most popular full moons of the year.

The upcoming full moon is set to rise on Wednesday, Oct. 20 in the eastern sky right around sunset, local time. 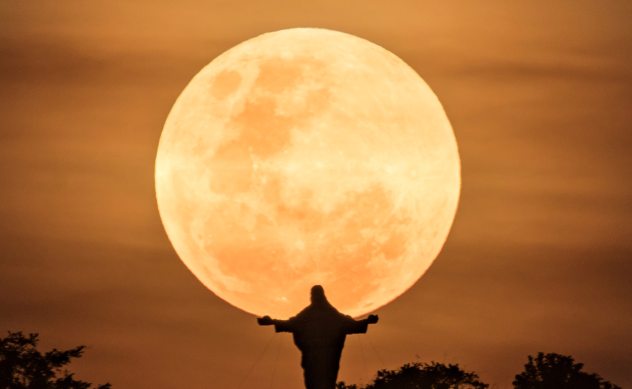 October’s full moon is often called the Hunter's Moon as it is the time of year when hunters begin collecting food and storing it for the long and cold winter months ahead, according to the Old Farmer’s Almanac.

Other nicknames for October’s full moon include the Falling Leaves Moon, the Migrating Moon, the Drying Rice Moon, and the Freezing Moon.

Last October featured two full moons, the second of which fell on Halloween, making it a blue moon. This was the first time that a full moon filled the sky on Halloween since 2001, and it will not happen again until 2039.

Folks out enjoying views of the moon on Wednesday night should also be on the lookout for shooting stars as the Hunter Moon coincides with the peak of the Orionid meteor shower.

In a typical year, onlookers can count around 20 meteors per hour during the Orionids, but the light from the full Hunter's Moon will wash out many of the dimmer meteors. This will reduce the number of visible meteors to just a few per hour.

People determined to see the Orionids should wait until the second half of the night when the meteor shower is most active and focus on darker areas of the sky away from the bright moon.