The East Troublesome Fire grew to the second largest in Colorado state history on Oct. 22, as the fire exploded in size to more than 170,000 acres.

A powerful storm system is set to bury parts of the West with snow and deliver a shot of bone-chilling cold, but another threat will accompany the system, one that wildfire-weary residents of the West will find unwelcome.

It's already been a long wildfire season as fires have broken records for the largest fires recorded in both California and Colorado state history, and relentless fires across the West have led to persistent, poor air quality and choking smoky conditions at times. 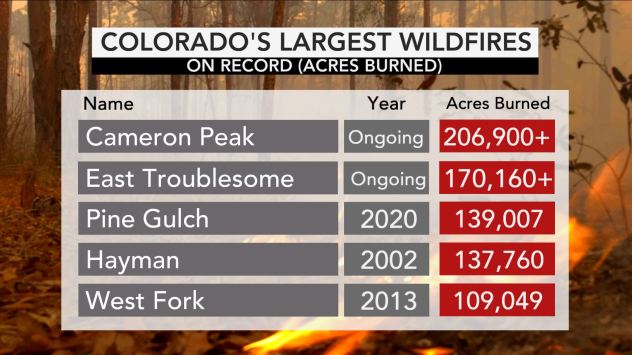 More recently, two wildfires in northern Colorado have added to the destruction as they exploded in size this past week, fanned by gusty winds. Now, forecasters say another round of strong winds will once again exacerbate the problem.

"As a storm system shifts south through the Rockies, winds will increase across much of the Southwest into the day on Sunday," AccuWeather Senior Meteorologist Dave Houk explained. 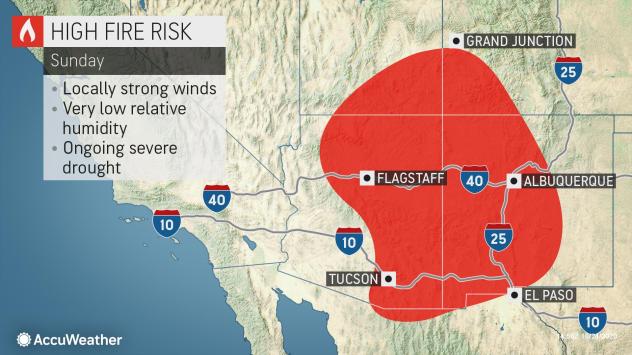 In much of the risk area on Sunday, winds can gust to 60 to 80 mph, with an AccuWeather Local StormMax™ of 100 mph. This can lead to extremely fast-moving fires that are extremely difficult for firefighters to control. 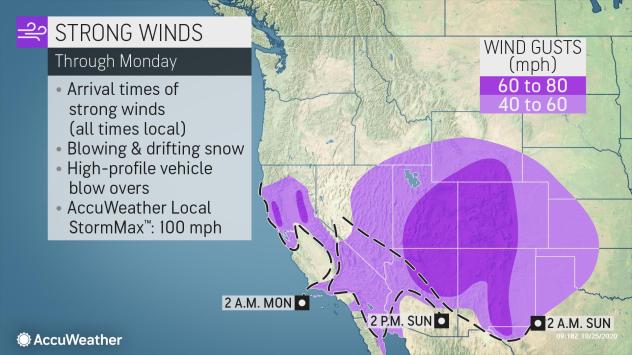 Residents who live from southern Colorado to much of Arizona and Utah should be prepared to make a hasty escape and heed all orders from officials.

Fortunately, for residents of these areas, the fire threat will be short-lived.

"The same storm system responsible for the threat will also help to alleviate it by bringing much colder air, snow and rain southward through the Rockies and into the Southwest through Sunday night and on into early week," Houk said.

Santa Fe, New Mexico, first experienced a high fire threat with strong, dry winds and temperatures in the mid-70s Saturday, then a sudden transition to temperatures in the teens and 4-8 inches of snow by Monday night will bring an end to that threat. 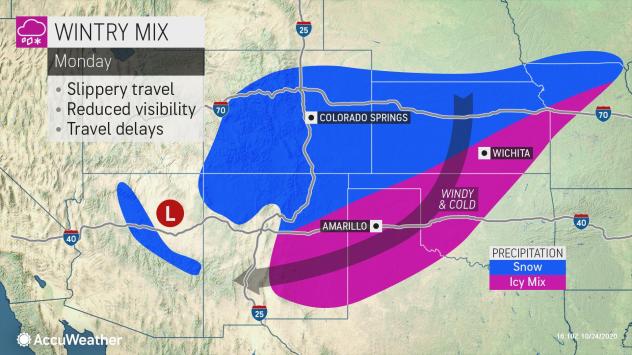 In Phoenix, a city that shattered heat records this year, skies will be gray Monday with showers and temperatures stuck in the upper 60s. The last time Phoenix didn't reach at least 70 degrees was on March 26, 2020.

Even as the wildfire threat in interior areas is largely eliminated by the end of the weekend, fire-weary Californians will brace for worsening conditions.

"As high pressure moves into the West behind the storm, strong north and northeasterly winds will develop again across the state, first in Northern California Sunday then into Southern California by Monday," Houk explained. 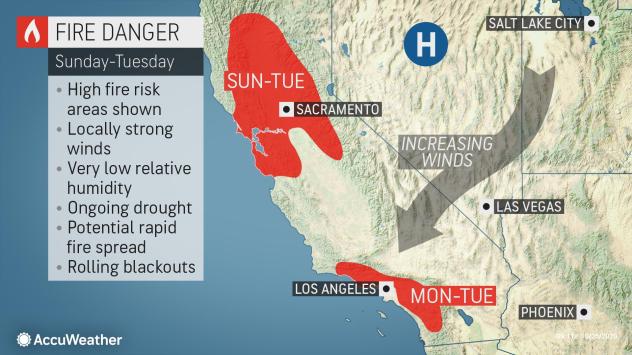 These strong offshore winds in Southern California are known as Santa Ana winds and are known for producing dangerous fire weather conditions in the region every autumn.

Widespread wind gusts of 40-60 mph are expected in the mountains and passes of both northern and southern California as well as the upper and lower desert in southern California. Some of the strongest gusts of 60-80 mph will be in the western foothills of northern Sierra as well as around the "North Bay Hills" north of San Francisco. A few gusts to 70 mph will also be possible in the mountains around Los Angeles as well.

"This is expected be the first real noteworthy Santa Ana wind event of the season for Southern California," AccuWeather Senior Meteorologist Brian Thompson said. It will be a brief wind event for California, with the strong winds tapering off again by later Tuesday, Thompson, who runs the company's Western weather blog, added.

Residents are urged to heed to all local officials and warnings regarding the fire danger and be prepared to react quickly to rapidly changing conditions and any rapidly spreading fires.