Tornado risk ramps up as severe weather erupts over central US

The weather pattern will remain volatile across the southern Plains as spring gets underway this week.

A multi-faceted storm system slated to bring blizzard conditions to parts of the northern Plains and record-challenging heat to portions of the mid-Atlantic will also unleash multiple rounds of severe weather in the south-central United States into Thursday evening.

Winter will go out with a bang in terms of severe weather over the Central states as spring officially arrives at 10:50 p.m. CDT on Thursday.

The storm system is the same one responsible for bringing much-needed rainfall to California and burying the Sierra Nevada with feet of snow from this past weekend into the first part of this week.

Prior to this system's arrival, a small pocket of severe thunderstorms erupted in western Texas late on Tuesday into Tuesday night. These storms were responsible for producing two tornadoes, one in New Mexico and one in Texas, and a few incidents of large hail.

Storms to repeat in Texas into Wednesday night

Unfortunately, the same area could get hit with a more widespread severe weather event through Wednesday night as the vigorous storm system moves into the Four Corners region.

The severe storms first erupted on Wednesday afternoon, including one storm that unloaded ping pong ball-sized hail on Lubbock, Texas. 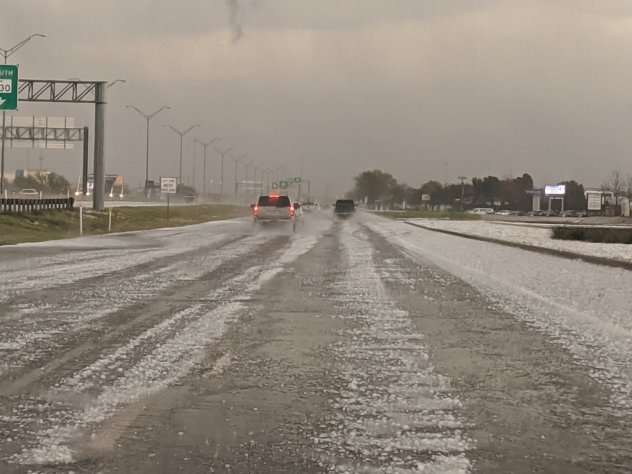 Later Wednesday night, the storms could reach Oklahoma City and the western suburbs of Dallas before weakening Thursday morning.

Residents in Wednesday night's threat zone should be sure to keep a weather radio or cell phone enabled with the latest severe weather warnings handy since these alerts may otherwise go unnoticed when many are sleeping. 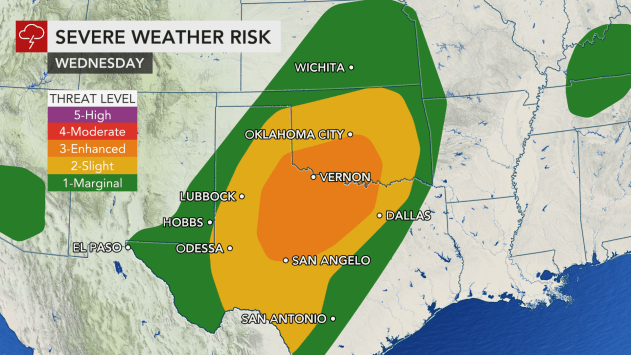 From late Thursday morning through Thursday evening, yet another round of severe weather is expected from eastern Texas, eastern Oklahoma and Arkansas to Missouri, Illinois, southern Iowa and eastern Nebraska.

Unlike what will occur on Wednesday, Thursday's severe storms are anticipated to be at their peak intensity during the daylight hours. Still, some gusty to severe storms will likely survive after dark during Thursday evening. 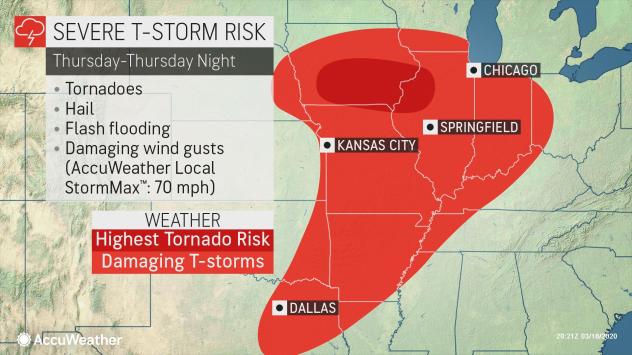 "Thursday poses the greatest risk of tornadoes of the entire multiple-day severe weather risk this week," according to AccuWeather Senior Meteorologist Alex Sosnowski.

From eastern Kansas and western Missouri to eastern Oklahoma and east-central Texas, the greatest threat for severe storms will be during Thursday morning as what is left of Wednesday night's storms moves eastward.

However, a second, and more potent, round of storms will erupt later Thursday afternoon farther north and east, and this is the round of storms that will produce the highest risk of tornadoes.

"It is likely that the greatest threat for more than a couple of isolated tornadoes may exist over parts of eastern Nebraska, southern Iowa and western Illinois close to where a warm front will set up," Sosnowski added.

Because multiple rounds of storms may move from southwest to northeast over the same areas on Thursday, the risk for flash flooding will be higher than on Tuesday and Wednesday.

Some of these areas, especially ones closer to the Mississippi River, have already dealt with flooding and excessive amounts of rainfall so far this year. The additional rainfall could create new flooding problems on creeks and streams that, when combined with heavy rainfall farther upstream across the Midwest, could work its way into the larger rivers by the weekend or early next week.

In addition to the risk for flooding this week, localized power outages, as well as tree, roof and property damage, could occur in any areas hit with wind gusts of 50-60 mph or higher. Any large hail could damage unprotected vehicles and damage any tender vegetation beginning to bloom across the region.

Unrelenting rounds of rain to pester large swath of US Airports packed as coronavirus screenings cause delays Coronavirus latest: more cases globally than in China, according to researchers Times Square is much different amid coronavirus concerns

Because the volume of people driving or taking mass transit to work has dropped off significantly due to the increased volume of telecommuters related to the COVID-19 pandemic, the risk for widespread travel delays during the afternoon commutes will be lower than usual this week. However, employees that must travel may encounter difficult, to at times dangerous, travel conditions.

Remember to pull over, if necessary, when driving through hail, strong winds or blinding downpours or reduce speed to minimize the risk for hydroplaning on higher-speed interstates.

By Friday, the risk for severe weather will diminish as the energy supporting the storm system lifts well northward into the Great Lakes region and southeastern Canada. Still, some stronger, gusty storms are forecast to impact areas from the Ohio Valley to the Tennessee River Valley before drier and cooler weather sweeps into the central and eastern United States by the weekend.