'That’s the only thing that kept us alive': Survivors shaken by Houston-area tornado

The mayor of the Houston suburb of Deer Park said he was amazed that no one was harmed by the twister, which was given a rating of EF3 strength Wednesday afternoon by the National Weather Service.

Houston’s mayor says it’s “miraculous” that everyone survived a powerful tornado that hit the southeast side of the metro on Jan. 24.

Severe thunderstorms took aim at the Gulf Coast on Tuesday, spawning numerous tornadoes that created widespread damage from Texas to Louisiana. The Houston area felt the brunt of the storms as a powerful twister ripped through neighborhoods and downpours prompted water rescues on Tuesday. As the sun rose on Wednesday, the extent of the damage could be seen across parts of Texas.

As the strong tornado ripped through several Houston-area suburbs just before 2:30 p.m. CST Tuesday, the National Weather Service (NWS) issued a rare tornado emergency for the suburbs of Pasadena and Deer Park due to the storm’s life-threatening impacts.

Extreme Meteorologist Reed Timmer was reporting live from Deer Park shortly after the tornado passed by, making sure local residents were safe in a shopping center that was completely littered with debris.

"The tornado has just come through … emergency personnel are responding, and we're going to shift into search and rescue mode here," Timmer said in an update. "This is a dangerous situation."

No injuries or casualties were reported from the twister, officials in Deer Park said in an update Tuesday evening.

"There is one aspect of me that's amazed that no one got injured," Deer Park Mayor Jerry Mouton Jr. said in a press conference Tuesday evening. "We will deal with the property and recover and rebuild." 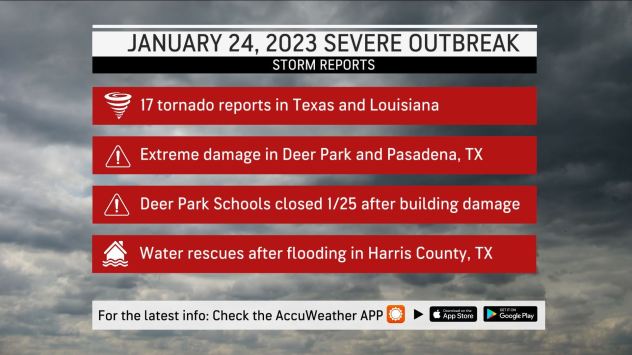 Between 25 and 30 structures in Deer Park sustained "significant damage," and at least 30 local roads were closed due to fallen trees or power lines.

Both Harris County Judge Hidalgo and Texas Gov. Greg Abbott signed disaster declarations for the county on Thursday as a result of widespread damage. The governor's declaration also included Orange County, and additional counties may be added, according to the governor's office.

"This declaration will ensure the County has maximum flexibility needed to respond and recover from the tornado, including helping affected jurisdictions with needed debris removal," Hidalgo's office said.

The NWS office in Houston confirmed Wednesday afternoon that the twister that barreled through the southeastern Houston suburbs was EF3 strength, with peak winds of 140 mph. The tornado was noted to be on the ground for approximately 18.8 miles with a path width of just over half a mile.

This has been the only EF3-rated tornado in the Houston/Galveston area to strike in January, according to AccuWeather Senior Weather Editor Jesse Ferrell, citing data from TornadoArchive.com.

A drone survey of the tornado path in Deer Park, Texas, showed a broad scope of damage left behind following the tornado emergency that had been issued for the area on Tuesday afternoon. The aerial footage showed debris scattered across the ground, utility poles leaning dangerously over the roads and roofs torn from homes. In the background, a line of cars was stopped behind police vehicles. The video also showed a structure that caught fire.

Deer Park resident Jim Favir told AccuWeather National Reporter Bill Wadell that typically the town has sirens that go off when a tornado is creating imminent danger, but this twister hit before the sirens could go off.

“We were watching a movie actually just relaxing on the couch and then we just heard, you know loud wind noises and we looked out the window and whole patio furniture just flew away,” Favir recalled. “The fences started falling over. So we ran to the center of the house and got the dogs.”

Favir told Wadell he’s thankful that there was only “minimal damages” on his property.

“I’ve lived here my whole life,” Favir said. “I know this area gets storms, but I mean nothing like this.” 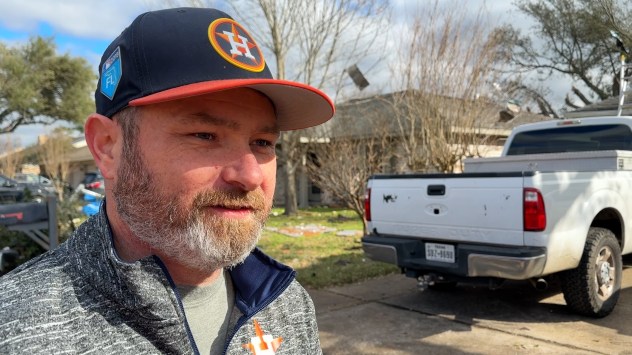 A nursing home in Deer Park was one of the many buildings damaged by the twister. Officials said residents had to be taken away, but no one was hurt.

The twister tore the roof off St. Hyacinth Catholic Church in Deer Park and tossed it into the yard. As the sun came up on Wednesday, a video from FOX26 reporter Chelsea Edwards showed piles of debris littering the property. Caution tape blocked off an area where a toppled tree and a section of the roof lay.

The severe weather led to an incident at the Shell Deer Park Chemical Plant. The facility's Twitter account updated residents on an incident involving flaring activity, stating that the plant was "taking steps to minimize any noise, light, or smoke associated" with the incident and that there was "no threat to the community."

Houston's Public Works department reported late Tuesday afternoon that a wastewater facility on Kingspoint Road in the southeastern area of the city also sustained "significant damage," but that the facility is still functioning.

In the neighboring suburb of Pasadena, several homes, schools and businesses were damaged. 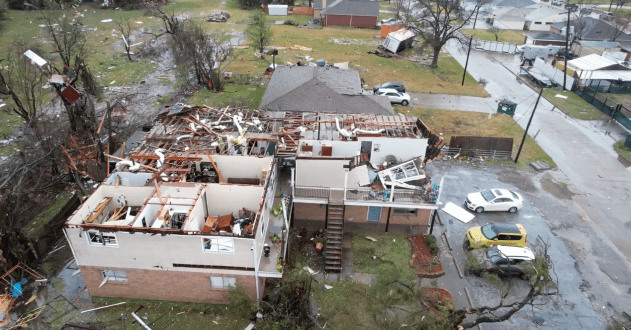 The Pasadena Animal Shelter was hit hard by the storm. A large section of the roof was ripped off the building as the storms barreled through. The shelter was in immediate need of foster homes for the animals as a result.

"No employees were injured. No animals were killed. However, we do have reports of minor injuries with at least two dogs," Pasadena Community Information Manager Laura Branch Mireles told AccuWeather in an email. "Neighboring city shelters, rescue organizations and volunteers have stepped up to offer foster help. More than 70 animals are being transported for temporary shelter. Volunteers immediately showed up to help transport animals to safety."

Another building that sustained extensive damage from the twister was the Crossfit Southbelt gym in Pasadena. Due to the quick response effort of the co-owner Chris Duke, he and three others narrowly avoided death.

"We were working out and just took a little break because the wind picked up," Duke told Wadell. "I went to shut the door, [and] about that time, the door blew off." 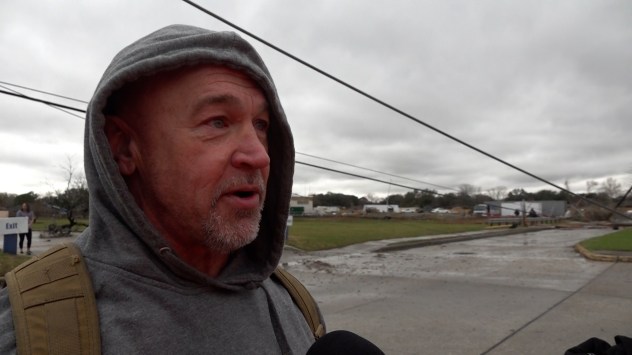 Duke then took his wife and two others into a restroom, and the building collapsed while they were inside.

"Luckily, the bathroom was reinforced, built really well, that's the only thing that kept us alive," Duke said. "Everybody's alive, everything else can be replaced."

Duke and the others were able to fight their way out of the restroom doors before emergency personnel showed up.

Joanne Owens, a Pasadena resident, told Wadell she was watching the news when the tornado warning came across the screen. That’s when she and her husband sheltered in a hallway closet.

Not long after both of them were in the closet, Owens said they heard a “big bang,” which she thinks was a large piece of metal debris flying into the roof. 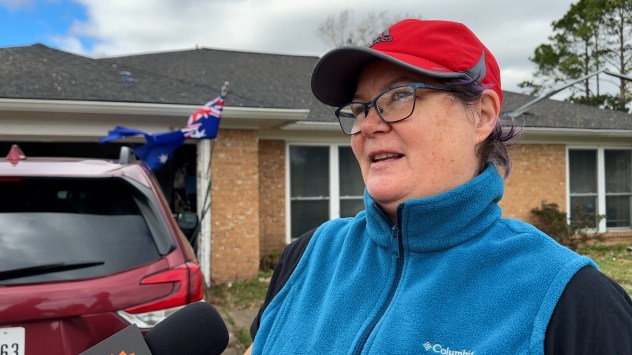 Damage to an apartment complex in southeastern Houston left some residents without a place to call home Tuesday night. Wadell was at the complex off Beamer Road in the far southeastern area of the city, stating that residents were shaken up by the tornado that tore through.

Some second-floor units in the complex were missing roofs, fencing was bent and debris was littered around the complex. Houston firefighters went door-to-door after the tornado struck in the afternoon, tagging damaged units, with some residents not able to see inside.

Some residents that were at work when the tornado hit frantically attempted to get home through roadblocks and debris, wanting to check on pets and see what can be salvaged from their units. Wadell also noted that poor phone connection in the area made communication tougher for those trying to get in touch with loved ones.

As the storms continued to track east, another twister was reported near the Texas-Louisiana border in Orange, Texas. One couple was forced to flee their RV as the tornado came barreling down. In a dramatic video shared by Zachary Peck-Chapman, the couple could be seen running from their RV with their two dogs and finding shelter in a nearby ditch filled with water. In the last seconds of the video, the couple could be seen pulling their dogs into the ditch with them as the wind blew around them. 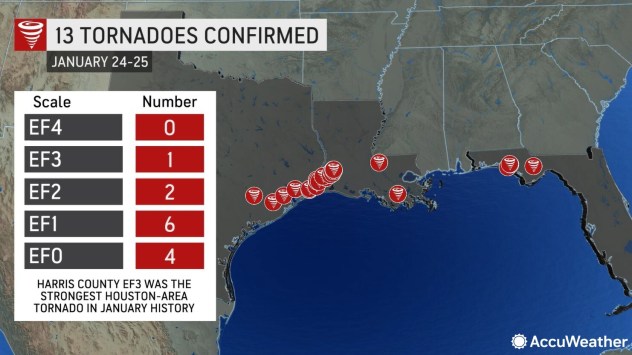 The Storm Prediction Center recorded 13 tornado reports on Tuesday. Most tornadoes occurred from the Houston area to the Texas-Louisana border. There was one report of a tornado in Florida late Tuesday night.

As of Wednesday morning, nearly 40,000 customers remained without power in the wake of Tuesday's tornadoes, according to PowerOutage.US. The majority of the power outages in Texas came from areas ravaged by Tuesday's storms.

The Houston area was also drenched in rainfall Tuesday. A new daily rainfall record was set in Houston when 4.05 inches fell at George Bush Intercontinental Airport. This broke the old record of 1.94 inches, which was set back in 2011. 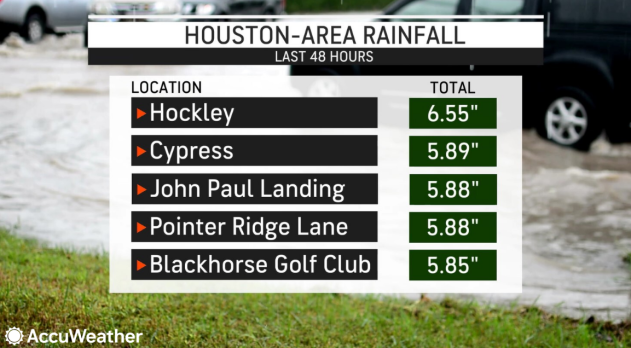 Rainfall totals in the Houston area as of early Wednesday morning.

The Texas Department of Transportation was also assisting in areas of high water. On Interstate 45, the rainwater turned parts of the highway into a river, prompting rescues on Tuesday.

Wadell shared a video from Interstate 10 near Brookshire, Texas, roughly 9 miles east of San Felipe, where the eastbound lanes were underwater.

January 2023 has been an active month for severe weather across the United States. Since the first of the month, there have been 139 preliminary tornadoes across the US, according to the NWS.

While it is generally uncommon to see a lot of tornadoes in January, AccuWeather forecasters say that it's not unheard of. AccuWeather Meteorologist Raya Maday explained that the clusters of tornadic activity across Louisiana, Alabama and now Texas has to do with the right ingredients being in place.

"The cluster of reports over Louisiana and into Alabama, that's just due to the proximity of how close the Gulf [of Mexico] is," Maday said in an interview with AccuWeather Chief On-Air Meteorologist Bernie Rayno. "The Gulf is 2-4 degrees C above normal. And what that means is we get more moisture."