Flouting the warnings of lifeguards and barriers, several spectators of a prestigious surfing tournament found themselves swept off their feet when the powerful waves the event is famous for reached them.

Spectators watching a big wave surfing contest on the Hawaiian Island of O’ahu were knocked down after a wave swept onto the beach where they were standing on Jan. 22.

Thousands of spectators flocked to watch the return of a renowned surfing tournament, and the waves that crashed ashore tested the mettle of North Shore lifeguards in more ways than one.

The Eddie Aikau Big Wave Invitational, sometimes alluded to as the "Super Bowl of Surfing," or the "Eddie," returned for the 10th time in over 30 years on Sunday as waves at Hawaii's Waimea Bay swelled over a story high. The one-day surfing contest of will in Waimea Bay on Oahu's North Shore is only held when the swells consistently reach an astounding 20 feet, testing the skills -- and mettle -- of the select group of surfers invited to the event.

Organizer Clyde Aikau said at a news conference Friday that he expected waves to reach 25 to 30 feet by Hawaii's measures -- or 50 to 60 feet on the national scale.

The waves met the swell height requirement Sunday, with one of the larger swells recorded by an NOAA buoy at Waimea Bay clocking in at 20.3 feet just before 9 a.m. local time, along with a wave of the same height just before 3 p.m. Temperatures also soared, reaching a balmy high temperature of 77 degrees Fahrenheit. 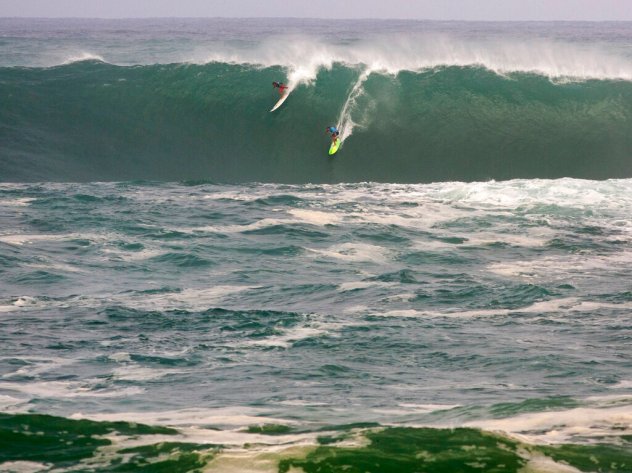 Jamie Mitchell, right, and Ross Clarke-Jones, both of Australia, surf in the Eddie Aikau big-wave surfing contest in Waimea Bay near Haliewa, Hawaii on Feb. 25, 2016. One of the world's most prestigious and storied surfing contests was held Sunday, Jan. 22, 2023, in Hawaii for the first time in seven years. (AP Photo/Caleb Jones, File)

Due to the wave height requirement, the tournament is held between mid-December to mid-March when winter storms in the Pacific are capable of creating monstrous waves. However, there have been a number of years since its first run in 1984 when the waves weren't high enough and the tournament was scratched. Sunday was the first time the tournament was held in seven years thanks to a storm churning southwest of Alaska that ushered in the vital towering swells from thousands of miles away.

"It was a very powerful storm with very low pressure, more representative of what you might see with a hurricane, so it was generating a lot of wind and waves, which all propagated southward toward Hawaii," AccuWeather Senior Meteorologist John Feerick said.

For the first time in the tournament's nearly 40-year history, women were invited to compete alongside men, according to The Associated Press. Keala Kennelly, of Kauai, a women's big wave surf champion, was among the 40 surfers invited to the event. 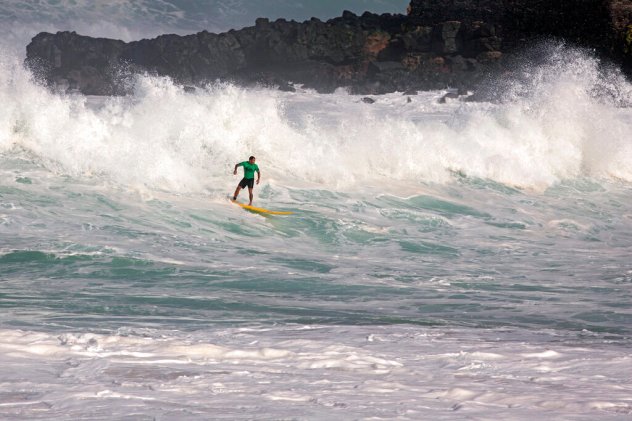 Some tens of thousands of spectators flocked to Waimea Bay to watch the prestigious event, according to organizers, keeping the lifeguards busy. One video from Sunday showed how the waves rushed ashore, including one that knocked over visitors who had stepped past metal barriers on the beach. One announcer called for the adults present to watch their kids as the water threatened to sweep away anyone who was knocked off balance. Another video showed lifeguards bolting into the waves to save people who had been dragged back by retreating waves.

"Onlookers got a touch of what can happen if you don't back up and listen to the lifeguards. Mother Nature did not disappoint and the surfers put on a show!" Honolulu Ocean Safety, which is run by the Hawaiian government, posted on its Instagram.

A post shared by C&C of Honolulu Ocean Safety (@honoluluoceansafety)

Lifeguards told Hawaiian News Now that they had rescued 64 people at the bay Sunday, and Ocean Safety responded to a home after a large wave crashed ashore, knocking into two adults and a baby. The baby was washed under the home but was quickly retrieved and uninjured, according to Hawaiian News Now.

The competition is named after the late Edward Ryon Makuahanai Aikau, the first lifeguard for the entire North Shore, including Waimea Bay, who saved 500 people over the course of his career.

"Eddie would brave the waves that often reached 30 feet or more when no one else would go out," the tournament's website reads. "It's important to keep his legacy alive and inspire the next generation to live like Eddie did." 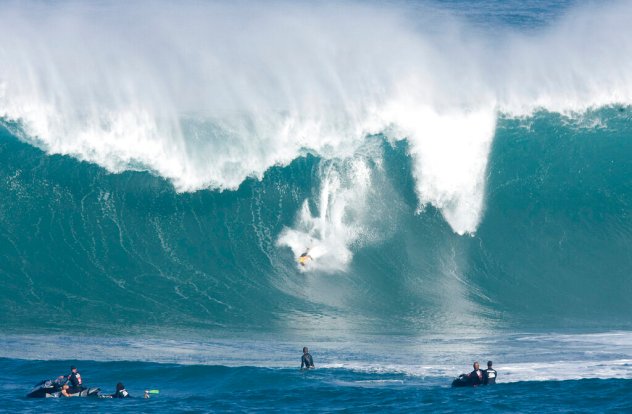 In this Dec. 8, 2009, file photo, Mark Healey of Hawaii, takes a spill down the face of a large wave in the second heat of The Quiksilver in Memory of Eddie Aikau surf contest at Waimea Bay located on the north shore of the island of Oahu in Hawaii. (AP Photo/Eugene Tanner, File)

"On that first voyage, we were facing cultural extinction. There was no navigator from our culture left. The Voyaging Society looked beyond Polynesia to find a traditional navigator to guide Hōkūleʻa: Mau Piailug," reads the society's website, adding that without him, the first voyaging would have never taken place.

In 1978, the Polynesian Voyaging Society set out for Tahiti once more. Hours after sailing out of port, however, the Hōkūleʻa capsized. It would take hours before the U.S. Coast Guard would rescue the crew, but not before Aikau volunteered to paddle on his surfboard for several miles to the nearby Lanai Island for help. Aikau was never seen again.

Now, the tournament is held both to honor his legacy and to celebrate Hawaiian culture.

Luke Shepardson, a North Shore lifeguard, won the 2023 Eddie on Sunday when he took a few hours off of work to compete.