Scientists decided to test if a laser beam pointed at the sky could act like one big virtual and movable lightning rod.

The groundbreaking technique includes a weather-controlling laser. Here’s a breakdown on how it works and its future applications.

(CNN) -- Scientists were able to create a virtual lightning rod using a large, powerful laser atop a mountain in Switzerland, successfully diverting the path of lightning strikes.

Lightning deflection technology hasn't changed much since Ben Franklin invented the lightning rod in 1752. The Franklin rod, or a pointed metal mast on top of buildings and other structures vulnerable to lightning strikes, works by intercepting lightning and guiding the strikes safely to the ground.

But the protection zone of Franklin rods is relative to their height — a lightning rod with a height of 10 meters (32.8 feet) protects an area with a 10-meter radius.

Since the height of lightning rods isn't infinite, broad ranges such as airports, launchpads, power stations, wind farms and nuclear power plants pose a challenge. Lightning causes up to 24,000 deaths a year and can cause power cuts, forest fires and damage infrastructure, according to a study detailing the findings published Monday in the journal Nature Photonics.

Scientists decided to test if a laser beam pointed at the sky could act like one big virtual and movable lightning rod. Previous research has supported the idea that laser pulses could influence the trajectory of lightning strikes, but that work had only been carried out inside a lab.

A laser the size of a large car was installed near a telecommunications tower on the summit of Mount Säntis in northeastern Switzerland. Lightning strikes the tower about 100 times a year. 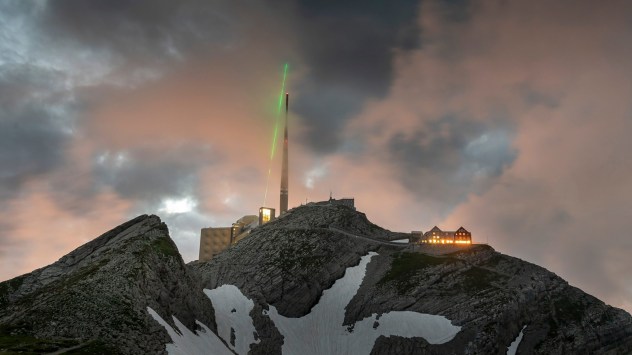 The Laser Lightning Rod was installed on the summit of Mount Säntis in Switzerland and activated from June to September 2021. (Martin Stollberg/TRUMPF)

Researchers activated the laser during the summer of 2021 for more than six hours across thunderstorm events between June and September. The Laser Lightning Rod, as it is called by members of the European consortium that developed it, was able to divert four lightning strikes.

High-speed cameras recorded the strikes, and other observations were taken using high-frequency electromagnetic waves created by the lightning as well as the X-ray bursts connected to the strikes.

"When very high-power laser pulses are emitted into the atmosphere, filaments of very intense light form inside the beam," study coauthor Jean-Pierre Wolf, professor of applied physics at the University of Geneva, said in a statement.

"These filaments ionise the nitrogen and oxygen molecules in the air, which then release electrons that are free to move. This ionised air, called plasma, becomes an electrical conductor."

The laser's channels of energized particles helped guide the lightning strikes along the laser beam. The laser was capable of firing up to 1,000 pulses per second. 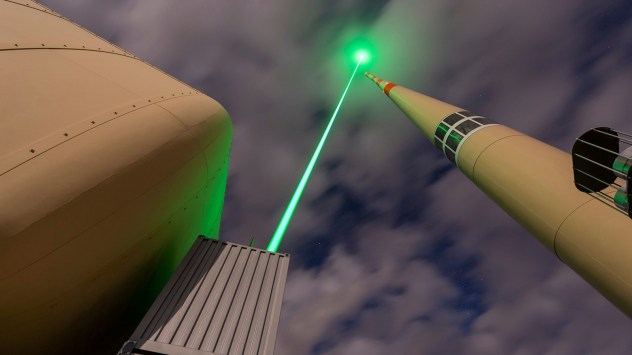 The Laser Lightning Rod was installed on the summit of Mount Säntis in Switzerland and activated from June to September 2021. (Martin Stollberg/TRUMPF)

The device was tested at a height of 2,502 meters (8,208 feet) atop Mount Säntis and was designed by Munich, Germany-based TRUMPF scientific lasers to operate even under difficult weather conditions, such as fog that often drifts around the mountain's summit.

"The main difficulty was that it was a life-size campaign. We had to prepare an environment in which we could install and protect the laser," said study coauthor Pierre Walch, a doctoral student in the Laboratoire d'Optique Appliquée, a joint research unit of the Institut Polytechnique de Paris, the French National Center for Scientific Research, École Polytechnique and ENSTA Paris, in a statement.

Each time storm activity was forecast around the mountain during the experiment, the area was closed to air traffic.

"The aim was to see whether there was a difference with or without the laser," said lead study author Aurélien Houard, research scientist at the Laboratoire d'Optique Appliquée, in a statement. "We compared the data collected when the laser filament was produced above the tower and when the tower was struck naturally by lightning."

The research team worked for almost a year to analyze the data collected during the experiment. 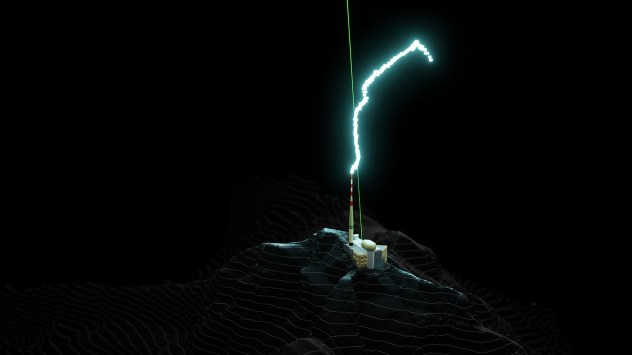 Lightning followed the laser beam for several dozen meters before reaching the tower (in red and white), according to the scientists. (Xavier Ravinet/UNIGE)

"From the first lightning event using the laser, we found that the discharge could follow the beam for nearly 60 meters (196 feet) before reaching the tower," Wolf said, "meaning that it increased the radius of the protection surface from 120 meters (393 feet) to 180 meters (590 feet)."

Next, the research team wants to increase the laser's capability by extending its reach and protection zone in the hopes that one day it may be used as a traditional lightning rod alternative for broad areas.