A storm system will bring downpours to the Gulf Coast this weekend, resulting in possible travel disruptions.

A pair of storms will bring rounds of drenching rain to portions of the south-central and southeastern United States into the coming week. Both storms could trigger localized flash flooding, travel problems and isolated severe weather, but the storm this week has the potential to unleash severe thunderstorms over a larger area, AccuWeather meteorologists warn.

The initial storm spread rain and thunderstorms along the Interstate 10 and 20 corridors on Saturday.

More moisture will be pulled into the storm as it moves to the northeast. This added moisture will cause the rain to ramp up in intensity farther to the east across northern Florida to Georgia and the Carolinas on Sunday. 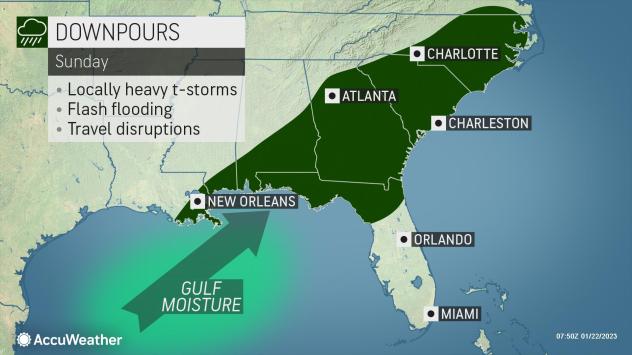 During this time period, thunderstorm activity may increase to the point where a few cities and towns could experience flash flooding and locally strong wind gusts.

A general 1-2 inches of rain will fall with locally higher amounts possible from southern Alabama to parts of Georgia and the coast of the Carolinas mainly through Sunday afternoon and evening.

Rainfall of this intensity could cause water to collect in poor drainage areas, create large puddles on area highways and trigger rises for some small streams, forecasters say.

Low cloud ceilings and areas of fog for a time on Sunday may lead to airline delays at some of the major hubs, such as Atlanta and Charlotte, as well as regional airports. 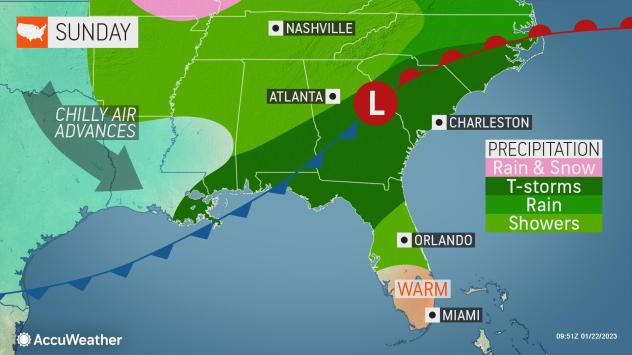 The second storm is likely to be the more potent of the two systems and will be a more widespread rain and thunderstorm producer.

Since a similar amount of rain -- generally 1-3 inches with locally higher amounts -- will fall from the second storm on top of the rain that fell a day or two earlier, the risk of flash flooding will be higher. Drenching rain will also reach farther to the north with the second storm and spread into the middle Mississippi, Tennessee and Ohio valleys, as well as in the southern Appalachians. 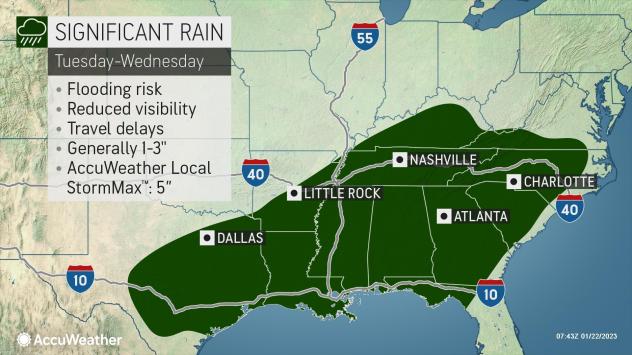 The stronger storm system has the potential to produce severe thunderstorms on a regional basis in the Southern states.

"There is the likelihood for thunderstorms to erupt and begin triggering damaging wind gusts and perhaps tornadoes on Tuesday and Turesday night from Louisiana to Mississippi and western Alabama," AccuWeather Senior Meteorologist Brett Anderson said. 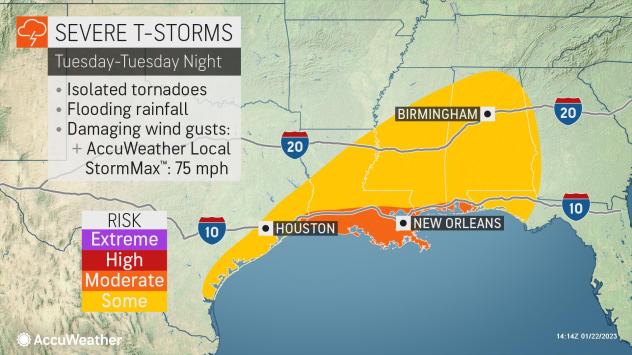 Depending on the track of the storm system, it is possible that the risk of severe thunderstorms and tornadoes may extend farther to the north into portions of Tennessee.

On Wednesday, the risk of severe thunderstorms capable of producing tornadoes will extend farther to the east and is likely to span across much of Georgia and South Carolina, as well as portions of North Carolina and northern Florida, Anderson said. 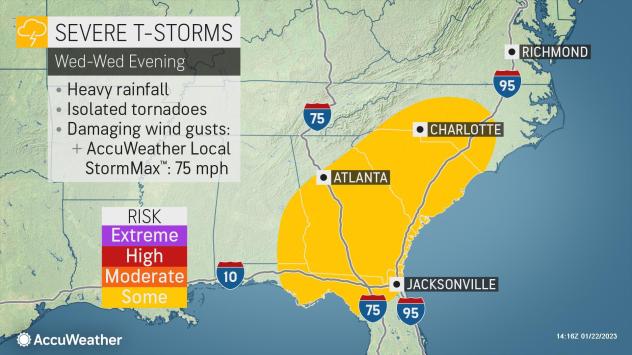 While direct airline delays from severe weather may be limited to a few hours due to the arrival of thunderstorms in the southern U.S. hubs, storms responsible for areas of snow and/or heavy rain farther north can also have an impact on flights across the nation and southern Canada through the middle of this week.

In addition to an active storm track across the U.S., unusual warmth with temperatures averaging 5-10 degrees Fahrenheit above normal has been partially to blame for the rounds of severe weather. The Gulf of Mexico has been rather warm as well, as water temperatures have been averaging 2-5 F above normal in January. Warmer air and warmer Gulf waters support more moisture and potential fuel for severe weather. 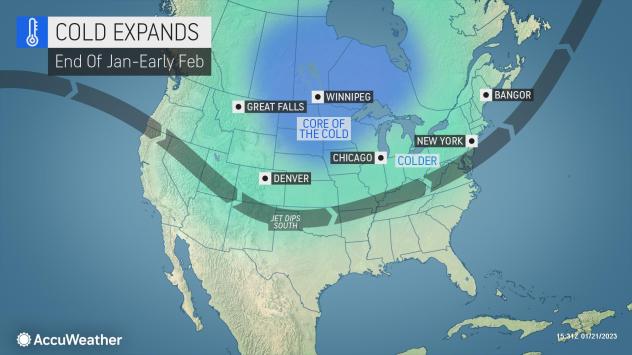 After the storm departs on Wednesday, colder air will settle across much of the central and eastern U.S.

This spread of more dense and stable air is likely to greatly reduce the number of severe thunderstorms through the end of January. However, it may still be possible for some robust thunderstorms to develop on one or more occasions in parts of South Texas, the Florida Peninsula and perhaps right along the central Gulf Coast.

46 years ago: The day it snowed in Miami