Houston and Dallas are two of the biggest cities facing the severe weather threat on Friday before the storms move east and target areas from New Orleans to Nashville on Saturday.

The weather will take a volatile turn across a sweeping section of the southern U.S. heading into the second weekend of January, with more than 30 million Americans under the threat for severe thunderstorms, including the potential for tornadoes.

The threat zone will include major metro areas such as Dallas, Houston, New Orleans and Nashville, likely leading to travel headaches. AccuWeather meteorologists warn that some of the most hazardous weather could occur after dark.

"Residents and visitors will need to be extra vigilant, as many people may not think about severe weather in January," AccuWeather Meteorologist Ryan Adamson said.

Tornado outbreaks in the month of January are not unheard of. A total of 455 tornadoes touched down during the month of January from 2010 to 2019 in the U.S., with a 10-year average of 45.5 twisters per month, according to an analysis of data compiled by the Storm Prediction Center (SPC).

However, as recently as 2017, 137 tornadoes touched down during the month of January, so even though it's not a time of year generally thought of as "tornado season," dangerous conditions can develop in tornado-prone regions during the first month of the year.

A strong cold front poised to sweep through the Southern states will be the trigger for the violent weather.

Warm, moist air flowing in from the Gulf of Mexico ahead of this system, combined with twisting winds in the lower part of the atmosphere, will contribute to a heightened risk of severe thunderstorms and tornadoes.

During the midday hours on Friday, a few severe storms erupted and produced large hail.

"On Friday afternoon, thunderstorms are forecast in southeastern Oklahoma, as well as central and eastern Texas," Adamson said. 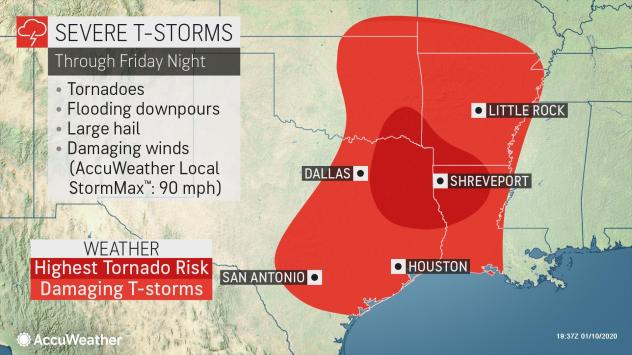 The threat in the Dallas area is likely to be early on during the outbreak.

The storms will keep every bit of their punch as they race eastward into the lower Mississippi Valley during Friday night in the form of a squall line.

"Some strong tornadoes are not out of the question," Adamson said. "The tornado threat will be highest in any individual thunderstorm cells that develop ahead of the main line, but tornadoes are possible anywhere in the threat zone."

"This really looks like the potential for a big outbreak of severe weather Friday night into Saturday and the concern is from east Texas all the way across Mississippi, Louisiana," AccuWeather Chief Broadcast Meteorologist Bernie Rayno said Wednesday on AccuWeather's Weather Insider podcast.

Rayno said that a lot of times severe weather can diminish when the sun goes down, but in this case he expressed concern the exact opposite is going to occur because of all the energy in the atmosphere. The severe weather will continue well past sunset and that is always a dangerous setup.

"I think there's gonna be wind, hail and I think we're gonna see tornadoes on the ground," Rayno said. "The question is: How many?"

Remember that it does not take a tornado to cause destructive damage to homes or businesses in a community, as intense straight-line wind gusts can inflict comparable damage.

Tornadoes and travel: How to stay safe inside an airport or hotel
7 lightning safety tips if you’re caught outside during a thunderstorm
Why washing dishes or showering during a storm can be extremely dangerous
Dangerous line of thunderstorms to blitz across southern US as weekend wears on

Residents from Houston to Little Rock, Arkansas, should consider charging their cellphones and leaving them on with severe weather alerts enabled and the volume turned up before heading to bed.

Motorists traveling along stretches of interstates 10, 20, 30, 45 and 49 will be at risk of facing torrential downpours and a heightened risk of hydroplaning.

"The line of thunderstorms will move eastward into Tennessee, Mississippi, Alabama, Georgia and the Florida Panhandle on Saturday," Adamson said.

People scheduled to arrive in the Big Easy on Saturday ahead of the College Football Playoff National Championship game on Monday, Jan. 13, should anticipate delays.

As the system moves along, locally damaging winds in lieu of severe weather may cause broken tree limbs and power outages across the region, especially in areas where the ground is saturated.

This same system will encase a 1,700-mile swath of the nation in ice and snow, while contributing to near-record warmth in portions of the Northeast and unleashing flooding rainfall across the Ohio Valley.

Ian enters the Gulf of Mexico, new watches and warnings issued for southeastern US