Severe weather dangers to march across southern US

The storm system “will pack a significant amount of wind energy,” according to one AccuWeather expert. Forecasters break down the biggest threats that will persist into midweek.

An outbreak of severe weather, which could include tornadoes and damaging winds, is likely to erupt across the South Central states, AccuWeather forecasters say.

A severe weather outbreak is expected to persist as thunderstorms march eastward, taking aim at areas from southeastern Virginia to northern Florida Wednesday. Some of the most intense thunderstorms will trigger damaging winds and could spawn a tornado, AccuWeather meteorologists warn.

The storm will continue to tap into warm, moist air from the Gulf of Mexico with an added moisture boost from the Atlantic Ocean Wednesday. Meanwhile, tens of thousands of feet above the ground, the jet stream, which is a high-speed river of air, will kick up the intensity of the thunderstorms. 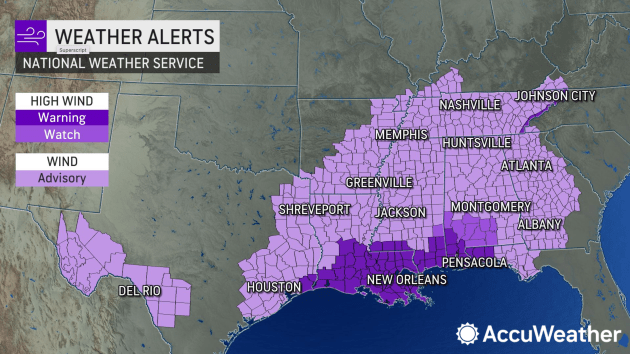 A line of thunderstorms, some severe, will be associated with a cold front crossing Alabama, the Florida Panhandle and Georgia Wednesday morning, AccuWeather Meteorologist Joe Bauer said.

"The storms in the morning may pose the overall greatest threat for severe weather on Wednesday in the Southeast states, Bauer explained."

Squalls, most likely in the form of a solid line of intense rain, flash flooding and strong wind gusts will advance from west to east from the southern Appalachians to the I-85 corridor through the midday hours Wednesday. The intense rain may roll through some locations without thunder and lightning. 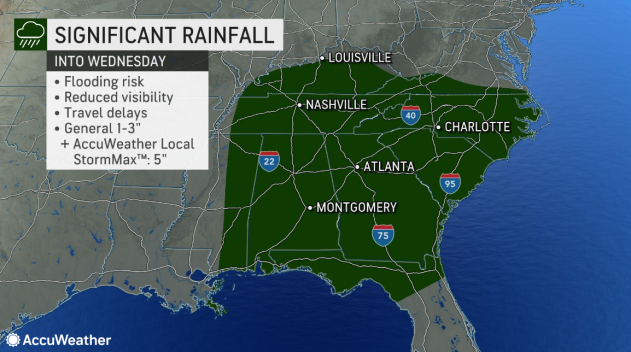 As this squall line moves along, urban flooding, tree damage and power outages are likely. These conditions can result in substantial highway and airline delays including the major southern U.S. hubs of Charlotte and Raleigh, North Carolina, through midday Wednesday. Wet soil conditions may cause waterlogged trees to fall over more easily than in a similar setup with dry soil.

Severe thunderstorms are still likely to occur Wednesday afternoon and early evening. During this time the threat will extend along the Interstate 95 corridor from southern Virginia to the Carolinas, southern Georgia and northern Florida, and along I-10 in northern Florida as well. The most significant threat from the storms will stem from powerful wind gusts that can reach hurricane force (75 mph) in some cases. 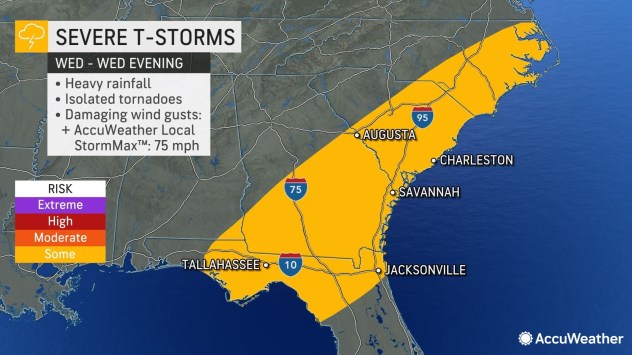 Farther south, some of the strong to severe thunderstorms will continue after dark over the northern part of the Florida Peninsula.

Winds associated with the band of heavy rain in the coastal Northeast can be strong enough to toss trash cans, recycling bins and other loose items around some neighborhoods farther north on Wednesday, Bauer said. 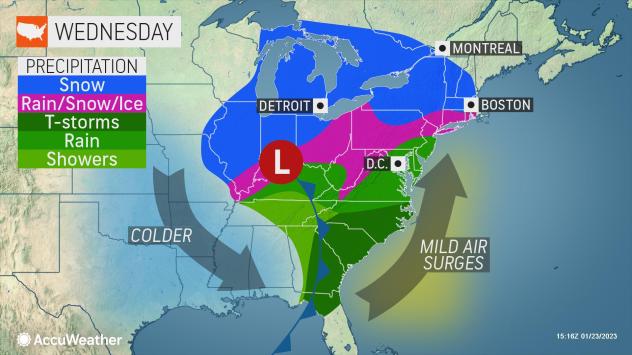 In the mid-Atlantic and in southeastern New England, outside of the storm system's snow zone, heavy rain and gusty winds can lead to their share of travel delays. As the wind-swept rain, fog and low cloud ceilings pivot from Washington, D.C., to Philadelphia, New York City and Boston, airline delays will spike and travel will slow along the I-95 corridor during Wednesday afternoon and evening.

Webb telescope peers into the frozen heart of a space cloud