More violent thunderstorms to threaten US this week

After damaging tornadoes struck the Nashville area early Tuesday, more severe weather, along with the risk of flooding, is expected through Wednesday.

Following deadly and destructive tornadoes in Tennessee early Tuesday morning, an outbreak of severe weather will continue to pummel portions of the United States this week.

The same storm system that produced severe thunderstorms and a small number of tornadoes over the Tennessee Valley, including Nashville, Tennessee, early Tuesday morning will continue to move eastward into Tuesday night. 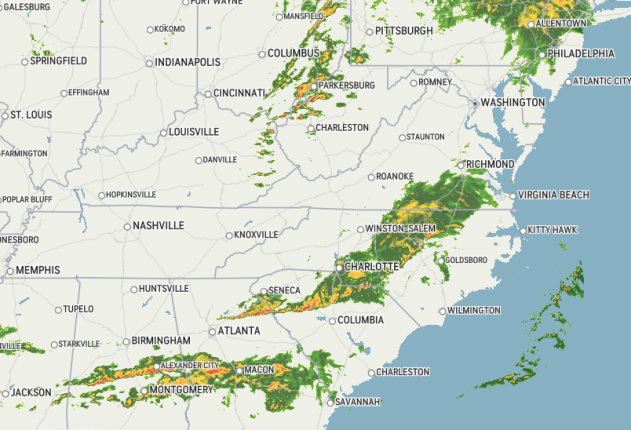 Storms with isolated damaging wind gusts, hail and flash flooding can extend from central and southern Mississippi to eastern North Carolina. A couple of isolated tornadoes cannot be ruled out, especially in parts of Alabama and Georgia.

Adding to the danger with the tornadoes in the South into Tuesday evening is the potential for some of the storms to be "rain-wrapped" or concealed by heavy rain.

People are encouraged to closely monitor the weather situation and seek shelter immediately when severe thunderstorm and tornado warnings are issued.

Farther north, storms that erupted in eastern Ohio, West Virginia and eastern Kentucky during Tuesday afternoon will progress eastward. Areas from the central Appalachians and upper mid-Atlantic to southwestern New England can be hit with heavy and gusty storms. 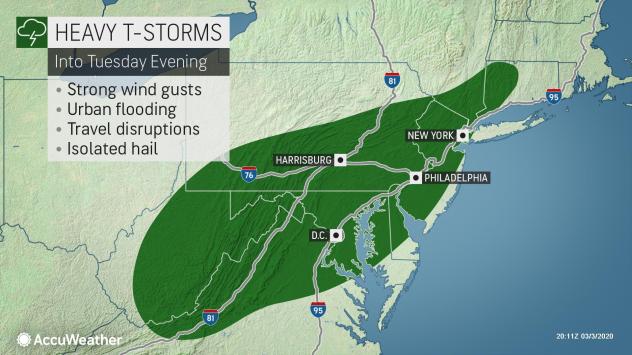 "Storms in this area are generally not expected to become widely severe," AccuWeather Lead Storm Warning Meteorologist Eddie Walker said. "However, the storms could organize into a squall line that produces gusty winds and torrential rain, advancing across the upper mid-Atlantic and southwestern New England areas into the first part of Tuesday night."

Up to marble and golf ball sized-hail and frequent lightning strikes could accompany the storms as they move from the eastern end of the Ohio Valley to the central Appalachians. The risk of hail will diminish shortly after sunset. During the early stages of the storms through late Tuesday afternoon, particularly in West Virginia, a couple of isolated tornadoes cannot be ruled out.

The storms in the busy and heavily populated northeastern corridor could be very disruptive for travel as they are likely to hit during the part of the evening commute. 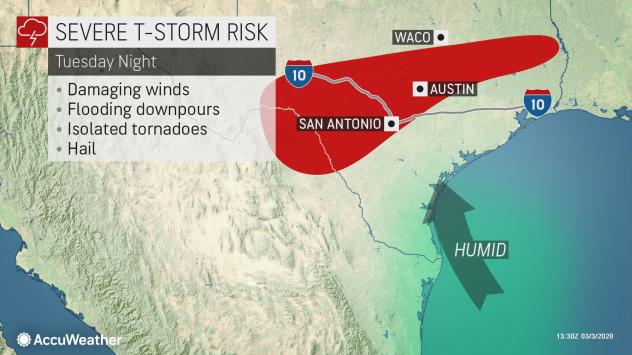 "Since the storms in Texas are likely to remain strong well after dark, it will add to the danger in the region," he added.

The threat for severe thunderstorms, including tornadoes, will continue on Wednesday and Wednesday night. 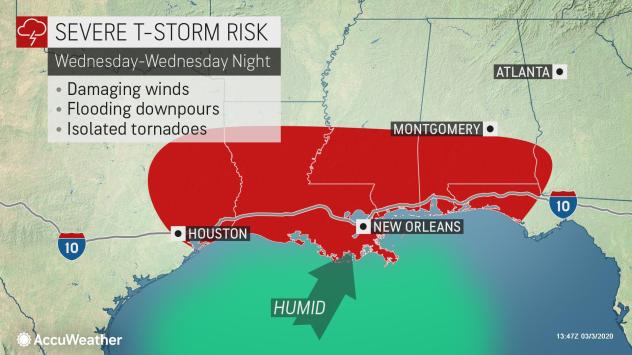 The storms on Wednesday are forecast to stretch along the Interstate-10 corridor from northeastern Texas to northern Florida and can extend as far to the north as the swath from central Louisiana to southwestern Georgia.

On Thursday, the severe weather threat will shift farther to the east over the Deep South. Storms from northeastern Florida to southern Georgia will carry a primary threat from damaging wind gusts. Still, a couple of tornadoes cannot be ruled out. 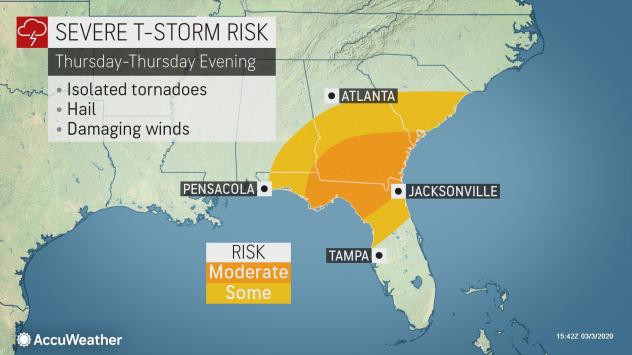 The repeating nature of the thunderstorms in the South, especially from the I-20 corridor on south through Thursday, will continue to keep the threat of small stream and river flooding elevated this week, even after rain departs later.

The severe weather this week may be just a preview of what is likely to be a very busy spring season.

A general 2-4 inches of rain with an AccuWeather Local StormMax™ of 8 inches is forecast from Tuesday night to Thursday alone, on top of rain that fell into Tuesday morning. 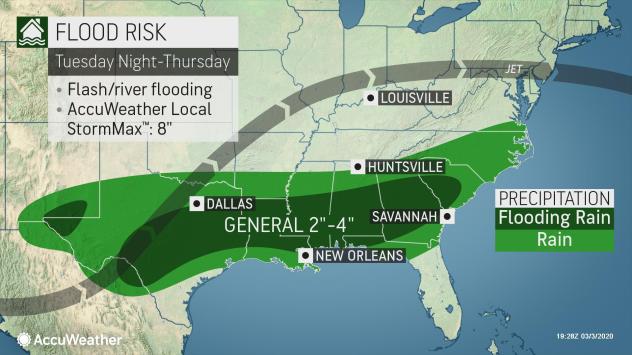 Some of the rivers that have been in recession in recent days are likely to rise once again. However, at this time, most rivers are forecast to stop short of major flood stage. This is due to the recent separation between storms, which has allowed water to drain off from most watersheds.

However, this does not mean that the region is off the hook for renewed major river flooding in the weeks ahead as more drenching storms are likely to visit the region.