Pesky storm to keep southeastern US drenched into midweek

Since late last week, the Southeast has been unsettled, and that will remain the case during the first week of July.

Forecasters are carefully monitoring a slow-moving storm system that has brought repeated downpours to the Southeast since last week. Widespread showers and thunderstorms will continue into the middle of the week -- and meteorologists say tropical development of this feature cannot be fully ruled out as it wanders toward the coast.

Residents and visitors may continue to struggle to find long enough dry breaks to get outside and enjoy summertime activities, such as fishing, golfing and swimming. AccuWeather's MinuteCast® tool can tell you exactly when rain will arrive in your area and how long it will last.

"Showers and thunderstorms will be widespread from extreme East Texas and Louisiana to Georgia and South Carolina through Tuesday night as a low pressure area drifts eastward from the lower Mississippi Valley to the southern Appalachians," AccuWeather Senior Meteorologist Joe Lundberg said. 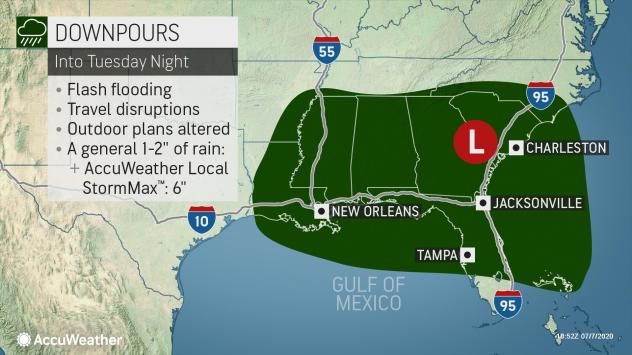 These areas have been doused by repeated downpours since last week, so any additional rainfall may struggle to soak into the saturated ground. As a result, the risk of flash flooding will be high.

"Many locations across the South and into the Southeast will receive 1-2 inches of additional rainfall through Tuesday night, but isolated amounts of up to 6 inches are possible," Lundberg said, adding that the Florida Panhandle, Georgia and South Carolina may be the hardest-hit areas during the first half of the week.

Drivers on stretches of interstates 10, 20, 55, 65, 75, 85 and 95 are likely to face slower-than-normal travel times due to the downpours reducing visibility and creating a heightened risk of vehicles hydroplaning at highway speeds.

Remember to never drive through floodwaters and instead turn around and find a safer, alternate route.

"As this low slowly meanders toward the Southeast coast, the area of enhanced rainfall will shift more into the Carolinas, perhaps even extreme southeast Virginia during the latter half of the week," Lundberg said. 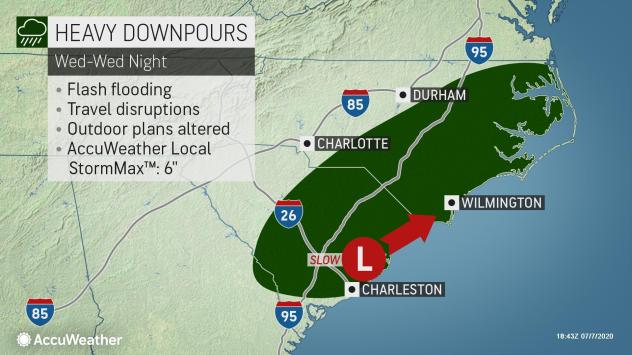 "The amount of rain during the second half of the week may be dependent upon potential surface development of this system and its ability to draw even more moisture inland off the warm waters of the Gulf stream," Lundberg added.

Regardless, AccuWeather meteorologists expect several inches of rainfall to douse the southern Atlantic Seaboard during the middle and latter part of the week, with an AccuWeather Local StormMax™ rainfall of 6 inches possible centered on the Carolinas.

Blistering heat wave to ramp up in southwestern, central US as July progresses
Could another 'homebrew' tropical system develop near East Coast?
Cristina poised to become first hurricane of 2020

The key to whether tropical development can occur with this system later in the week lies in how far east the center of the storm can make it off the coast of the Carolinas, according to AccuWeather Senior Meteorologist Dan Pydynowski.

"If the storm remains onshore or hugs the coastline, its interaction with land could limit its chance to develop and organize further. However, if the low center can drift far enough east off the coast of the Carolinas by later Wednesday or Thursday, then its chance to develop and organize further will increase, especially if it gets over the warm waters of the Gulf stream," Pydynowski said. 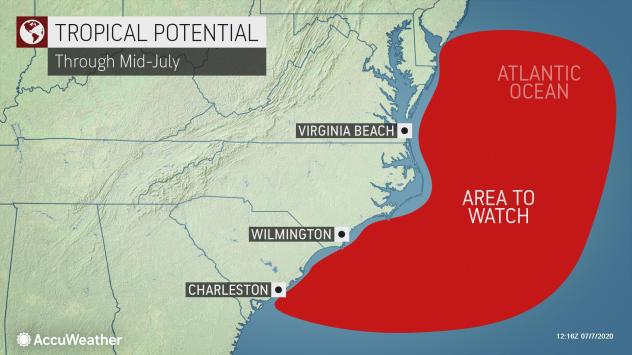 Should tropical development occur, this would enhance rough surf and coastal flooding concerns, as well as the potential for gusty winds, from the Carolinas to the Delmarva Peninsula.

Even in the absence of tropical development, forecasters say the storm will remain a disruption for those with travel, vacation and outdoor plans across the region as downpours persist.

An upside to the stormier pattern will be a lack of intense heat that can be typical of the region during the summer months.

While heat bakes areas from the Midwest to the mid-Atlantic, it will actually be a bit below average across the Southeast due to the widespread downpours, according to Lundberg.

For example, Atlanta may only be in the lower to middle 80s during the first half of this week, when a more typical high for early July is around 90.