Records continue to fall in the Atlantic basin just over a month into the 2020 hurricane season, and there is the potential for more tropical development this week and next week.

Following the formation of Edouard, which peaked Monday as a minimal tropical storm over the open Atlantic but may pester Ireland and the United Kingdom later this week with modest amounts of rain and some gusty winds, forecasters' eyes now turn once again to the lingering disturbed weather in coastal areas of the Southeastern states.

Edouard became the earliest fifth tropical storm in any Atlantic hurricane season since the satellite era of the 1960s. Edouard beat out Emily, which formed on July 12 and went on to become a Category 5 hurricane in the Caribbean Sea in 2005, by a week.

Now that Edouard has transitioned to a post-tropical cyclone and is tracking toward Europe, AccuWeather meteorologists are closely scrutinizing a large portion of the Atlantic coast of the United States as the area of disturbed weather could become Tropical Depression Six or even Tropical Storm Fay into the latter part of this week. 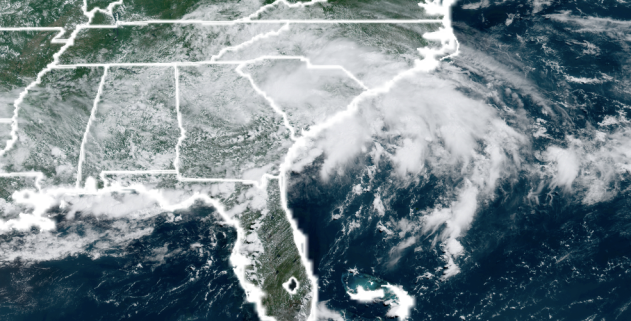 On this imaged taken on Tuesday afternoon, July 7, 2020, a swirl can be seen in the clouds centered over Georgia. It is as this disturbance wanders toward the Atlantic coast later this week, a tropical depression could be born. (NOAA/GOES-East)

"This zone along the Southeast coast represents the main region of lower atmospheric pressure, moisture in the atmosphere and low wind shear relative to much of the Atlantic basin," AccuWeather's top hurricane expert Dan Kottlowski said. 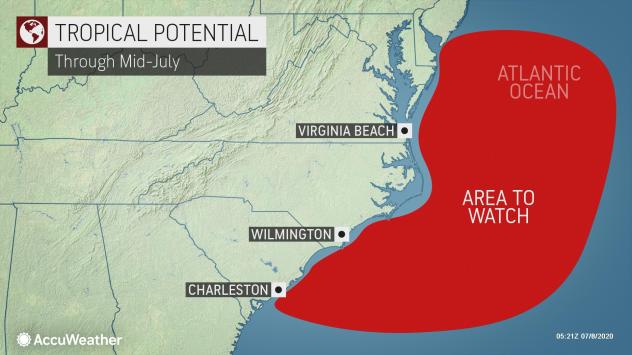 This same general area may not only give birth to a tropical system this week, but perhaps next week as well.

Vast areas of dry air, Saharan dust and wind shear have been suppressing tropical activity over much of the Atlantic basin over the past month and are expected to continue to do so in the coming weeks. However, there could be one or two exceptions, forecasters say.

While wind shear and dry air have increased just off part of the Atlantic coast to start this week, both are forecast to decrease once again during the middle and latter parts of the week.

This image captured on Monday, July 6, 2020, shows vast areas of dry air and dust (yellow, orange and red colors) over the tropical Atlantic and Caribbean Sea. Dust was lacking from the Gulf and Bahamas waters as well as a small patch east of the Windward and Leeward islands. (NOAA/GOES-East)

During Sunday night, a weak disturbance spun onshore from the Gulf of Mexico and will spend a short time over land in the Southeast states through Wednesday.

"Whether or not this feature or something else brews as a tropical system along the coast from the Carolinas to New Jersey into the latter part of this week cannot be said with certainty at this point. We estimate that chance near 50%, which is much higher from than before for the same period," Kottlowski said.

It does appear that some sort of storm system will take shape and drift northward with drenching showers, gusty thunderstorms and choppy seas and surf into Friday. 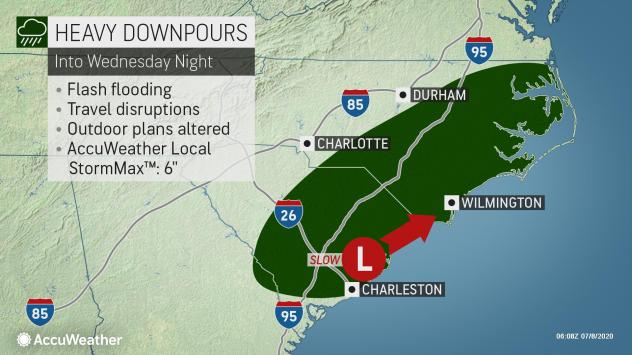 "If the feature hugs the coast, then the chance of it ramping up quickly to a tropical depression or storm may be much lower than if the system were to shift a short distance offshore," AccuWeather Senior Meteorologist Brett Anderson said. 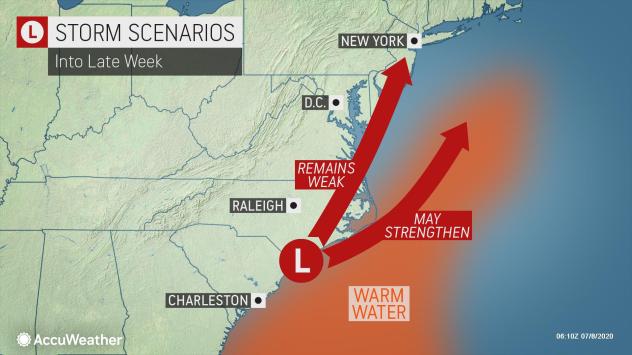 At the same time, a system that hugs the coast is likely to have more impact from downpours and locally gusty winds, than say a system a couple hundred miles offshore. At this time, it appears the near coast track is most likely. 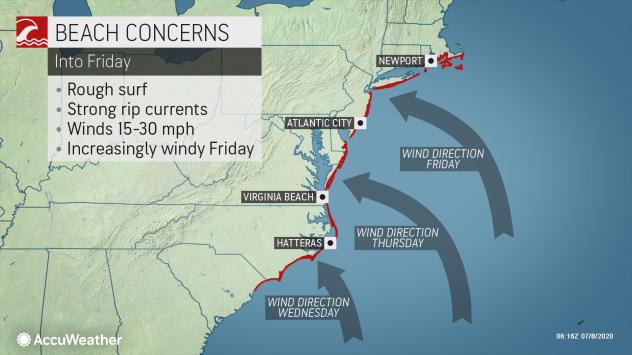 These storms are often referred to as "homegrown," because they develop close to the United States, and it’s the interaction between the jet stream and the tropics that can form them, according to AccuWeather Chief On-Air Meteorologist Bernie Rayno.

Areas of slow-moving and drenching showers and thunderstorms will continue to pester the Southeast states in general beyond midweek.

Next, this batch of showers and thunderstorms will begin to move northward on Thursday and Friday. 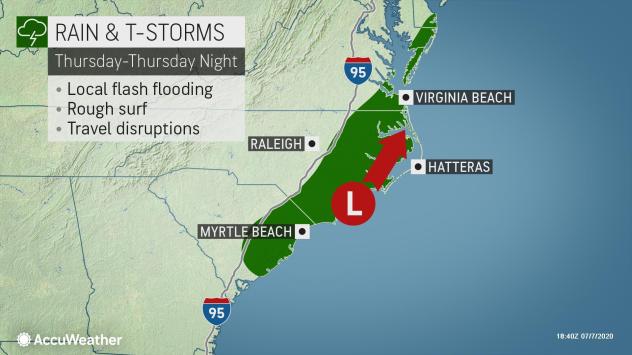 By Friday and into early Saturday, the system is likely to exert most of its influence on the upper mid-Atlantic and southern New England coasts. 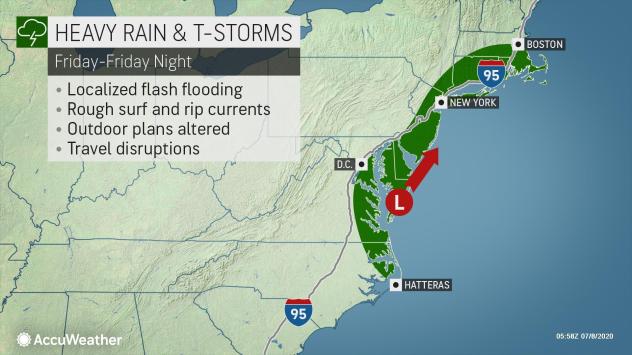 Over the weekend, the feature is likely to move off to the Northeast and away from New England at a fairly swift pace. Normally, the weather would improve, dry out and turn sunny in the system's wake, but it appears a non-tropical storm system will be on its heels and may continue the risk of showers and thunderstorms through much of the weekend in the mid-Atlantic and New England. 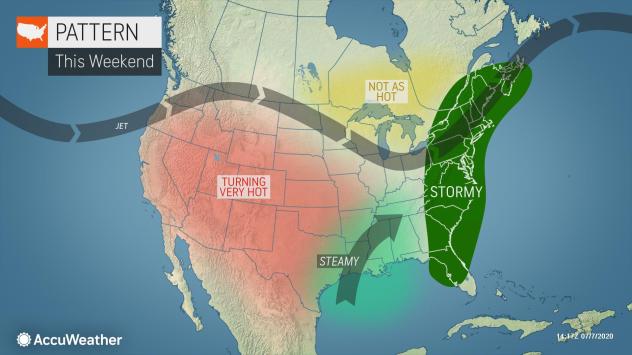 Should the system forecast to be along the Atlantic coast later this week become a tropical depression and strengthen to a tropical storm, it would take the name Fay.

The earliest sixth-named storm on record was Franklin during the record-breaking 2005 Atlantic hurricane season, the same season which produced Hurricane Katrina in late August. Franklin formed on July 21, near the central Bahamas, and traveled northeastward, well to the east of the U.S. coast. The storm did not reach hurricane strength.

AccuWeather is projecting a busy season ahead with 14-20 named tropical storms, seven to 11 hurricanes and four to six major hurricanes. Five tropical storms are already in the books for the season, with one U.S. landfall.

Beyond Fay, the next two named storms on the list for 2020 are Gonzalo and Hanna.

The 2005 hurricane season also holds the earliest dates for tropical storms through the letter "K" when Katrina formed on Aug. 24. Gert formed on July 24, 2005, followed by Harvey on Aug. 3. This was not the same Harvey that flooded Texas in 2017.

Since the area along the Atlantic coast of the U.S. will remain unsettled through the middle of July, it is not out of the question for another tropical feature to take shape in that area. Odds are agains any major tropical system in that area next week, but more likely systems similar to what has been occurring thus far this year in in the Atlantic, such as tropical depression and storms.