Northwest flood dangers to continue even after rain stops falling 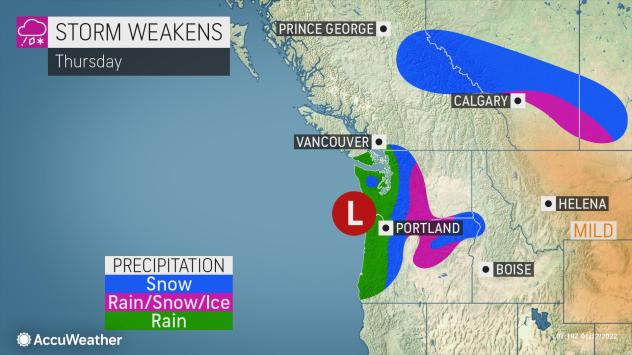 Following a brief weekend break in the Pacific Northwest, heavy rain returned to portions of the region on Monday before falling even heavier on Tuesday and Wednesday.

Along with some locations in Washington having received more than 9 inches of rain since Monday, another factor with this latest system has been warm air. 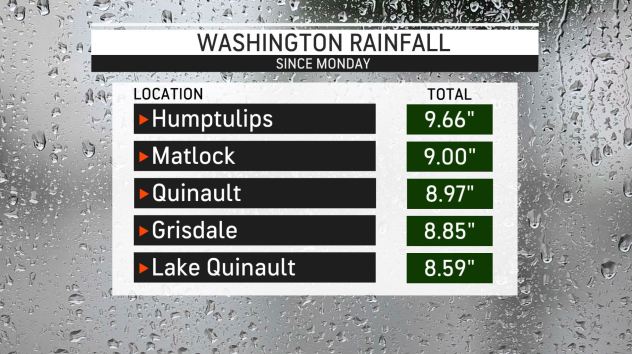 The deep snowpack will absorb the rain in locations where several feet of snow are on the ground. However, in lower elevations, that heavy rain will wash away the snow where less snow is on the ground, adding to the runoff.

"As the latest atmospheric river pushes moisture into this area and generates heavy rain, the combination of heavy rain and melting snow could lead to flooding problems," Babinski said.

Heavy precipitation continued through Wednesday, but will become lighter on Thursday. After that, a stretch of dry weather is expected from Friday through at least Sunday, as most of the moisture is directed north of the Canadian border.

Although several days without rain are forecast, this will not necessarily spell an end to any flooding problems.

"This break coming up should help to stabilize the rivers eventually, but they will be on the rise even after the rain stops," said AccuWeather Senior Meteorologist Alex Sosnowski.

In addition to the rivers taking some time to recede below the flood stage from the rain, temperatures during the day will rise above freezing in all but the highest elevations. This will lead to melting snow continuing to feed into the streams and rivers, keeping them elevated. 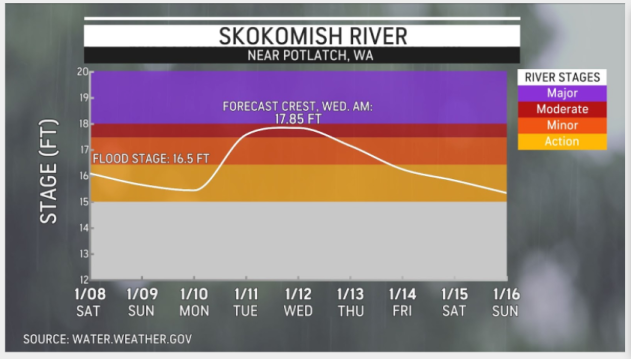 The next chance of precipitation may arrive as early as Monday, but any rain or mountain snow is expected to be light and primarily restricted to Washington. It will likely take until Wednesday or Thursday of next week for anything more significant to move ashore.

Throughout at least the next 10 days and likely beyond, no precipitation is expected farther to the south in states such as California, Nevada and Arizona.

Recent rain and snow have put a dent in the drought in those locations according to the United States Drought Monitor, but much more is needed to erase the long-term deficits altogether.

Luckily, despite the current break, there is plenty of time remaining in the typical rainy season in California. The wet season typically ends between March and May, from south to north.