A woman in Bellingham, Massachusetts, is lucky to be alive after being struck by lightning inside her own home during a thunderstorm on July 1.

Daily rounds of severe thunderstorms have been the norm for the north-central United States since the beginning of July, and AccuWeather meteorologists say that trend will continue this week.

Reports of damaging winds and hail have dotted the North Central states each day since Thursday of last week. Each day through at least Tuesday will likely be no different as thunderstorms are forecast to roar to life over the region each afternoon.

Sunday afternoon, severe thunderstorms roared to life across portions of Wyoming, Montana and the Dakotas, and left plenty of damage in their wake. According to reports submitted to the Storm Prediction Center (SPC), tennis-ball-sized to baseball-sized hail pummeled portions of North and South Dakota Sunday afternoon. Hail measuring up to 3.00 inches in diameter shattered windows, dented metal siding and destroyed corn crops.

"Thunderstorms that erupted Sunday over the northern Plains, did so around the periphery of a big heat dome that has been entrenched across the middle of the country," AccuWeather Meteorologist Matt Benz said.

This "heat dome" produced a couple days of scorching heat for much of the nation's midsection leading up to Independence Day. Daily high temperatures nearly 10 degrees Fahrenheit above normal were common from the Dakotas to the Upper Midwest.

Warm and humid conditions near the surface provide ideal atmospheric fuel for feisty thunderstorms. Seasonably high temperatures from the High Plains to the Upper Midwest, coupled with rather humid conditions, will continue to elevate the threat for severe thunderstorms to begin the week.

Into Monday night, the main threat for severe thunderstorms will shift slightly eastward and encompass more of the Upper Midwest. 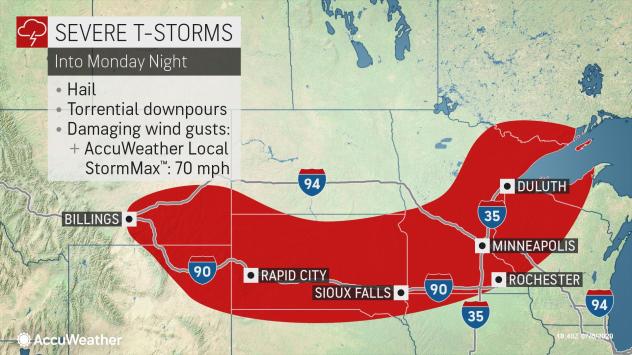 A cold front will stretched from eastern South Dakota, through Minnesota and into southwestern Ontario, Canada, early Monday and is forecast to dip southward Monday night.

Thunderstorms capable of producing damaging wind gusts, hail and torrential downpours will mainly set their sights on portions of Minnesota and South Dakota through Monday night.

Another area to watch for severe weather will be across southeastern Montana and northeastern Wyoming. The overall coverage of storms inbetween these areas is expected to be more isolated in nature.

Storms will fire up initially across eastern South Dakota, up into northeastern Minnesota, before sinking farther south to southern Minnesota by the late evening. The storms farther west are likely to originate in southeastern Montana and sweep southeastward into the overnight hours Monday.

Residents of cities like Rapid City and Sioux Falls, South Dakota, and Minneapolis and Rochester, Minnesota, will need to stay weather aware throughout the day. Where large protests are ongoing in Minneapolis, those participating should plan in advance to find a safe place to take shelter indoors should a dangerous thunderstorm approach.

The threat for severe storms will increase once again on Tuesday across the northern Plains. 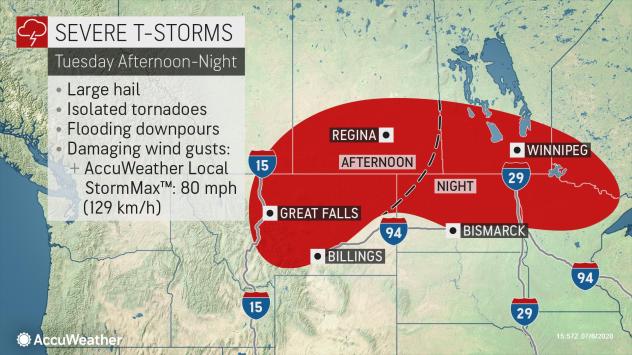 Storms are forecast to fire up later Tuesday afternoon from central Montana and southern Saskatchewan, Canada, to northern Minnesota and much of southern Manitoba, Canada. Damaging wind gusts, hail and heavy rain will once again be the main threats with these storms. However, an isolated tornado or two cannot be ruled out later Tuesday afternoon into Tuesday night.

AccuWeather meteorologists will continue to monitor this rather active and stormy pattern as more opportunities for damaging storms will persist through midweek. 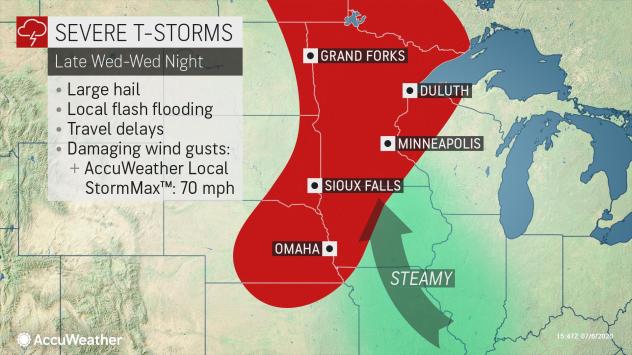