High heat to fuel thunderstorms from Plains to Northeast

Summer officially begins on Tuesday, and it could be a stormy start to the new season for millions of people across part of the central and eastern U.S.

Widespread heat will persist across the central United States into the new week with temperatures challenging daily records.

The northern Plains has been no stranger to thunderstorms as of late with multiple rounds of severe weather rumbling across the region. AccuWeather forecasters say that more of the same is in the cards for the first half of the week, in no small part due to the ongoing heat wave across the middle of the country. While storms are unlikely to be as widespread as some of the severe weather events earlier in the spring, a broad portion of the country may feel impacts through midweek.

Severe weather tracked across part of the central U.S. Sunday, with over 60 reports of hail and damaging winds received by the Storm Prediction Center. Most notably in the Plains, a 79-mph wind gust was reported in Medina, North Dakota, while tennis ball-sized hail pelted Alzada, Montana.

Severe weather also occurred in the Intermountain West, thanks to a flip of the winds to more of a southerly direction. This wind change, known as the North American monsoon, will continue to bring showers and storms to much of the region. Severe storms were isolated, although a 78-mph wind gust was observed near Lakeside, Utah. 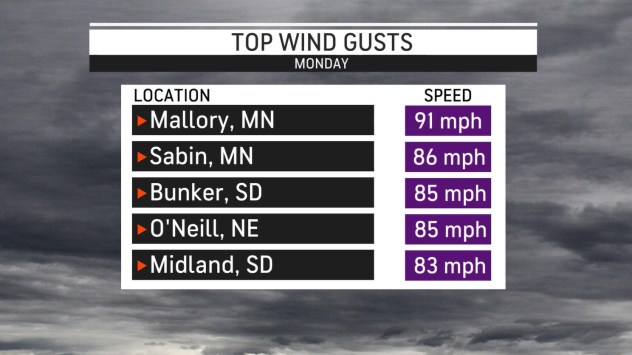 Storms were even more numerous on Monday, with at least 200 reports of severe weather received. A wind gust to 91 mph was reported in Mallory, Minnesota, with winds reaching 80 mph or greater in at least 3 states. Two tornadoes were also reported.

Summer kicks off on Tuesday at 4:13 a.m. CDT, and the first day of the new season is slated to be a stormy one across parts of the Midwest.

On Tuesday, the threat of severe storms will shift southeastward, stretching from Kansas to Wisconsin. While these storms are unlikely to be quite as widespread compared to Monday, high heat and moisture will provide an abundance of fuel for any storms that develop to turn severe. 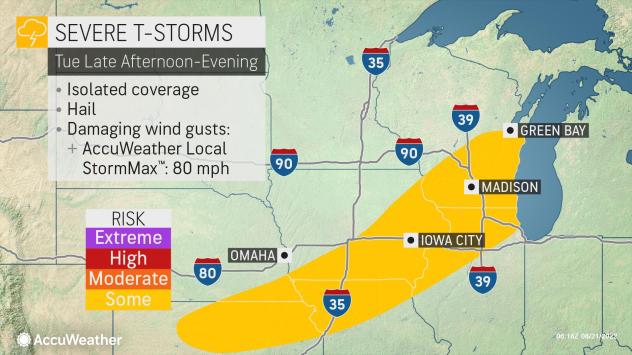 "The front will shift into the Great Lakes area and trail back into Iowa with isolated storms developing. There are some inhibiting factors compared to the day prior, but storms that manage to develop have the potential to be heavy and gusty," Rinde explained.

In any case, cities such as Des Moines and Madison Wisconsin could be dodging storms Tuesday afternoon or Tuesday evening.

Downtown Chicago currently looks to be just outside of the main risk area, but is not entirely out of the question that a storm will make it to the city Tuesday night. If this occurs, the highest chance for storms would be in the northern and western suburbs.

While Tuesday's storms may be isolated, the extreme heat in the Plains and Midwest will heighten the severity of storms that do develop. With increasingly humid conditions and high temperatures in the 90s F for most of the threat area, those without power and air conditioning in the wake of a severe storm may experience uncomfortable or even dangerous conditions. 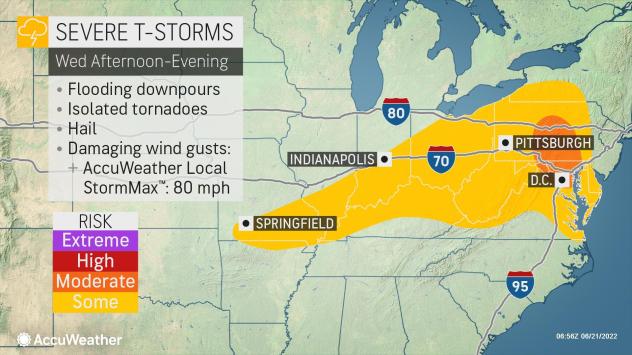 Storms will continue to march southeastward Wednesday, stretching across much of the Ohio Valley. While the severe risk may be isolated like what is expected Tuesday, showers and storms will still be possible in places such as Louisville, Kentucky, Pittsburgh, Pennsylvania, and Washington, D.C. Similar to Tuesday, hot conditions will make any power outages more impactful than normal.

Motorists traveling on the heavily-traveled interstates across the region could also face weather-related disruptions during this three-day stretch. Drivers are reminded never to use a highway underpass as shelter during a storm. Not only is this ineffective at preventing hail and wind damage, but it can also easily lead to vehicle collisions when visibility is low.