Much of the Northeast was transported back in time this weekend as conditions more akin to May than June were widespread. Despite the proximity to the summer solstice, the official start of astronomical summer, many residents were left to wonder what season it truly was this past weekend. AccuWeather forecasters say the overall atmospheric pattern this week may continue to add to the seasonal confusion.

Following a cool Sunday, a little change in the pattern started to unfold on Monday. High pressure began to lose its grip on the area and a push of warmer air approached from the west. This same air sent temperatures skyrocketing across the Central states. High temperatures across the mid-Atlantic and Northeast climbed back to within a few degrees of normal levels on Monday.

High temperatures across much of the northeastern United States were in the 70s on Monday. While these temperatures are still lower than normal, thermometers will largely top out within 3-5 degrees F of the normal reading for any given location.

The warming trend continued for portions of the Northeast on Tuesday, but many areas will encounter a slight dip in temperatures once again as the week progresses. 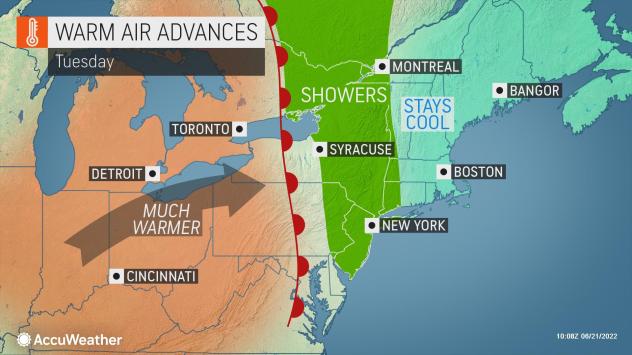 The mercury will continue to climb in cities such as Syracuse and Binghamton, New York, as well as Pittsburgh and Harrisburg, Pennsylvania, on Tuesday. However, locations like New York City and Boston will once again witness a downturn in temperatures as cooler ocean air remains in place.

While temperature variations are forecast to persist across the region this week, AccuWeather forecasters say one atmospheric element on a steady increase will be the amount of moisture in the air, also known as humidity.

"Although cities such as Baltimore, Philadelphia and New York City will be turning warmer to start the week, the most notable change in the weather pattern by midweek will be the increase in moisture," AccuWeather Senior Meteorologist Dan Pydynowski explained.

Dew points across the Northeast will tick upwards noticeably by later Tuesday into Wednesday. Higher dew points and humidity will lead to the air feeling "stickier" for many residents across the region while also ushering in increased precipitation chances. 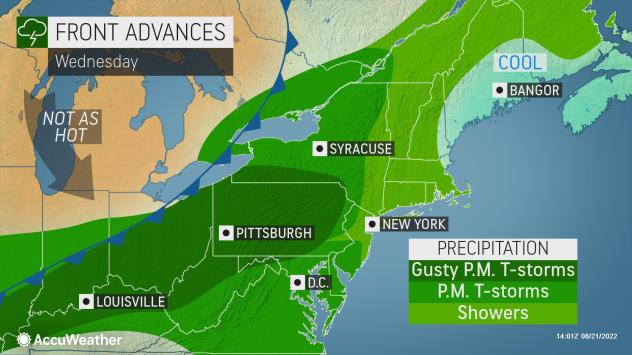 Showers will begin to overspread a swath of the Northeast from New York state to eastern Pennsylvania and New Jersey by Tuesday afternoon. Wet conditions are forecast to persist through the overnight hours and into Wednesday before becoming more widespread in nature.

By Wednesday, showers and thunderstorms are set to develop and overspread much of the Northeastern states. In some areas, especially from Pennsylvania southward to northern Virginia, some storms may turn severe. Depending on the position of the most robust moisture at the time, portions of eastern New England may be able to squeak out a dry day.

A soggy day may not be the ideal first full day of astronomical summer for summer weather lovers, but other residents wishing for springlike weather may be satisfied. Astronomical summer begins with the summer solstice, which will occur Tuesday at 5:13 a.m. EDT this year. 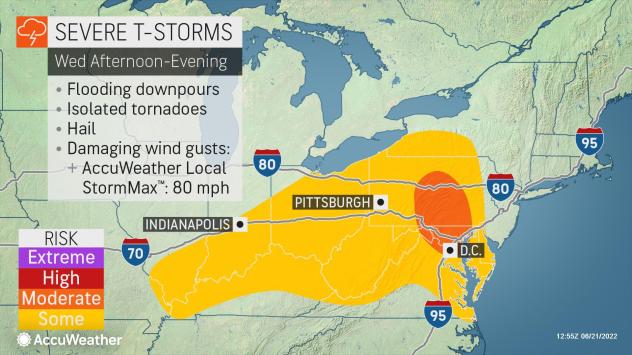 Some of the storms are likely to become severe Wednesday afternoon and evening, especially over portions of Pennsylvania, Maryland and Virginia where a substantial risk of damaging wind gusts and localized flash flooding will exist. A couple of the strongest storms can also produce large hail and a tornado.

After midweek, forecasters say the forecast for the Northeast, especially areas closer to the coast, becomes a bit complex. The forecast later this week in the Northeast may be complicated by several factors, including a disturbance in the upper levels of the atmosphere.

"An upper-level storm that is set to form near Bermuda this week is currently forecast to move westward toward parts of the mid-Atlantic region and Northeast by mid- to late week," Pydynowski explained. "Depending on the precise track of this feature, it could end up keeping a lid on temperatures by producing even more cloud cover and increased rain chances."

If this feature ends up staying farther out to sea, there can be the opportunity for a quick ramp-up in temperatures to end the week. In this scenario, portions of the Northeast could experience high temperatures on the order of 10 degrees F or more above normal.

Forecasters will continue to monitor the weather trends for the region over the coming days.

"Either way, there will be an increase in moisture and humidity for the Northeast," Pydynowski concluded.