A heat wave that gripped a large swath of the country brought discomfort for many, including the cattle in one U.S. state, where thousands died because of heat stress earlier this week.

Triple-digit temperatures will be possible this weekend as unseasonably hot and humid weather continues to build across the Great Plains.

Rows of cow carcasses can be seen lining the edge of a farm field in Kansas in at least one video being shared on social media.

State officials in Kansas are blaming a heat wave and its abrupt onset for the deaths of thousands of cattle earlier this week. The scorching heat challenged records across the nation's midsection and produced temperatures well above 100 degrees Fahrenheit in many locations. The AccuWeather RealFeel® temperature was 102 degrees Thursday afternoon in southwest Kansas. And this week, the United States Department of Agriculture (USDA) Cattle Heat Index reached into the "emergency" range in Kansas, the top of the scale. 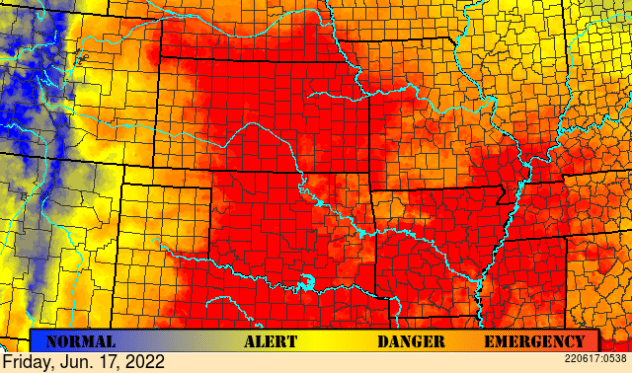 “And it was that sudden change that didn’t allow the cattle to acclimate that caused the heat stress issues in them,” said Scarlett Hagins, spokesperson for the Kansas Livestock Association.

Matthew Lara, spokesperson for the Kansas Department of Health and Environment (KDHE), told NPR on Thursday that the agency is "aware of at least 2,000 cattle deaths that occurred in the southwest part of Kansas," noting that the intense heat that baked the state made it "difficult for the cows to stay cool."

A Kansas Department of Agriculture representative noted to NPR that cattle ranchers aren't required to report their losses, so the impact cannot be fully measured. Furthermore, the number provided by KDHE is only representative of the farms that requested help from the agency to assist with disposal, Reuters reported, which could result in a higher tally than estimated. 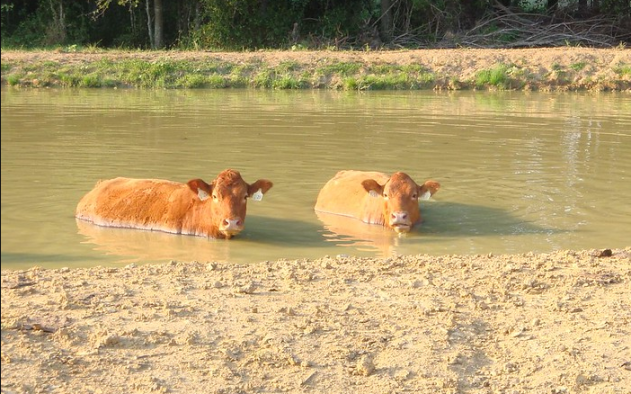 Beef dominates the agriculture sector in Kansas, making it one of the leading cattle-producing states in the country, according to a report from the Kansas Department of Agriculture. Kansas has the third-highest number of cattle on ranches and feedlots in the nation, the report also states.

The majority of the cattle population resides in the southwest corner of the state, according to a report from the USDA. This is an area that has been ravaged by a prolonged drought.

"According to the [U.S.] Drought Monitor, drought conditions began appearing in southwest Kansas during the last couple of weeks of September 2021," AccuWeather Meteorologist Jake Sojda said. "Extreme drought conditions began appearing on the drought monitor in far southwest Kansas [in early] January 2022, and drought has been steadily intensifying in the region ever since." 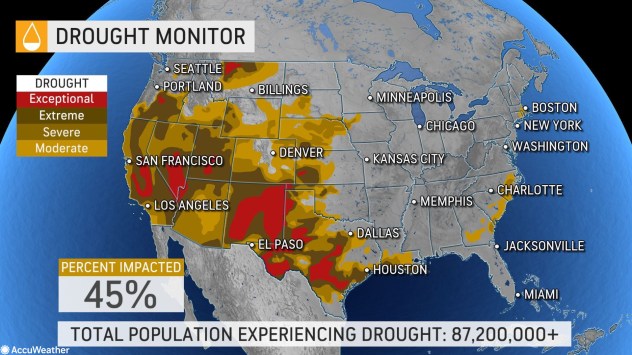 Sojda said that localized pockets of exceptional drought, the highest level on the drought monitor, began to appear in April of this year.

"Since then, occasional thunderstorms have helped to keep the drought from continuing to worsen, but this activity has been localized and infrequent, so drought improvement has also been isolated as well," said Sojda.

According to Kansas State University's mesonet in Haskell, the temperature was just under 80 degrees last week. Two days later, the temperature shot up to the triple digits and stayed there for four days, only briefly returning to the 80s on Wednesday before reaching the century mark again on Thursday.

Along with the sharp increase in temperatures and nine days with zero precipitation, the humidity levels significantly dropped from 80% last week to 23.8% on Monday.

And even four inches below the soil's surface, the heat was inescapable. Four-inch soil temperatures peaked at 90.7 degrees on Sunday.

"During these bouts of extreme heat, the cattle can't dissipate the heat at night because there's no night cooling," Dr. Dan Thomson, a bovine veterinarian who specializes in animal health welfare, said to Farm Journal earlier this week. "And so this perfect storm, it's no different than a tornado hitting a cattle feeding facility or a derecho. We have these natural disasters."

Hagins, of the Kansas Livestock Association, explained to local television station KAKE that heat stress kills some livestock every year. Still, a loss like this has a "significant impact," both emotionally and financially. Hagins noted that the market-ready value per animal would be around $2,000.

"Any kind of animal loss is significant to a producer, to cattle feeder, to a rancher," said Hagins. "No one wants to see any kind of loss like this."

In 2020, exports of beef and beef products from Kansas totaled $1.4 billion, ranking number one in the nation, according to the Kansas Department of Agriculture. Over the last five years, Kansas has accounted for 17-19% of U.S. beef exports.

The sweltering heat and high humidity across the Great Plains will likely not go away anytime soon, AccuWeather meteorologists say. Temperatures could challenge many record highs across the central U.S. next week, including more 100-degree readings in Kansas.