A series of storms will continue to slam the Golden State with rain and heavy mountain snow.

Following a delayed start to the wet season in fire-ravaged California, the switch has been turned on as a series of storms continues to douse the Golden State. Soon after a storm over Northern and Central California winds down, a new plume of moisture, or an atmospheric river, will unleash heavy rain and high country snow over Southern California to the interior Southwest at midweek. 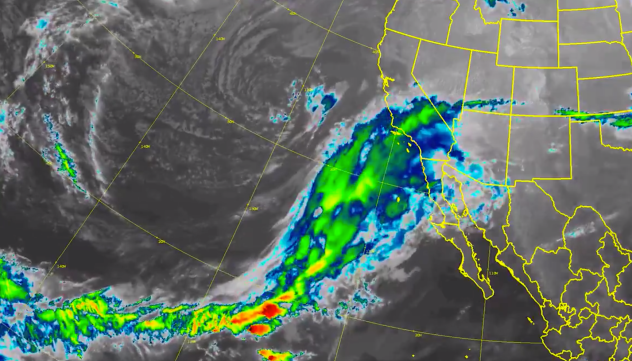 This satellite imagery shows clouds tracking across the Pacific Ocean and into the Southwest on Dec. 3, 2019. (Image/NOAA)

The storm is not expected to unleash the equivalent of the late-November blast of rain and snow. However, it is likely to cause travel disruptions in many locations and perhaps more serious problems in others.

Snow levels are forecast to be rather high in Southern California, so motorists should not have to contend with winter conditions over Tejon and Cajon passes this time around.

Snowfall with the storm into Wednesday night will generally be limited to elevations above 6,500 feet over much of Southern California and Arizona but can dip to 5,500 feet over the southern part of the Sierra Nevada, where 1-2 feet of snow is in store. 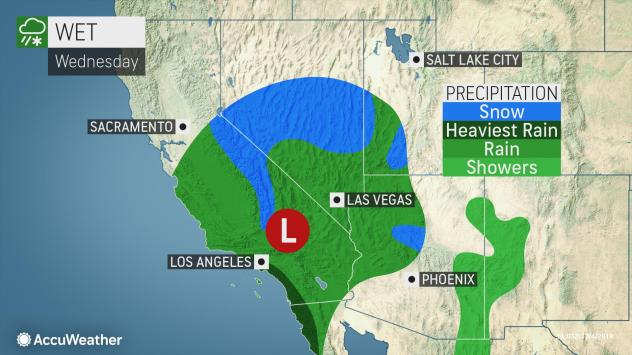 "The higher snow levels throughout the region will mean that rain will eat into some of the snowfall over the intermediate elevations in Southern California and Arizona in particular," Adkins said.

The combination of rain, rising temperatures and melting snow can lead to flooding along some of the small streams and short-run rivers flowing out of the mountains.

A general 1-2 inches of rainfall is forecast to fall in about 24 hours over coastal Southern California with 0.50 of an inch to 1 inch over the deserts.

Heavier rainfall is expected over the mountains. An AccuWeather Local StormMax™ of 4 inches can occur in the south- and west-facing slopes of the San Gabriel Mountains.

This is enough rain can to cause localized flash flooding in desert and urban areas.

What you should do if you get stuck driving in floodwaters Train of West Coast storms to continue into late week December astronomy preview: 3 events stargazers won’t want to miss

Motorists should expect delays due to drenching rain, excess water on the roads and poor visibility for the Wednesday morning rush hour in the Los Angeles and San Diego areas.

The bulk of the rain will fall on Las Vegas during Wednesday afternoon and evening with the wettest part of the storm due to be Wednesday night around Phoenix.

AccuWeather meteorologists warn that you should never attempt to drive through flooded areas as the water may be much deeper than it appears. A foot of flowing water can cause lightweight vehicles to lose traction and can swiftly carry them downstream into deeper water. Flowing water can also disguise a roadway that has been washed away.

Tragedy struck in Arizona over the Thanksgiving holiday as a truck with young children as passengers was swept away while attempting to cross a stream.

Since the last rainstorm was only a few days earlier, some of the hillsides may quickly become unstable with a fresh dose of drenching rain. As a result, the potential for mudslides and other debris flows may be higher with this storm, compared to that of last week. This is especially the case for burn scar locations, but the threat will not be limited to fire-charred areas.

Meanwhile, the system moving through is potent enough to produce a few thunderstorms, some of which may be capable of spawning small hail and gusty winds.

The region will get a break from storms during the latter part of this week. However, a new storm forecast to roll ashore in Northern California and the Northwest is likely to bring showers this weekend.

Download the free AccuWeather app to check the latest forecast and weather advisories in your area. Keep checking back on AccuWeather.com and stay tuned to the AccuWeather Network on DirecTV, Frontier and Verizon Fios.