Upwards of 50 people were rescued as floodwaters swamped a community in China's Anhui Province on July 8, leaving many trapped in their homes.

Despite forming several days ago and spending several days over the open waters of the Eastern Pacific Ocean, AccuWeather forecasters say the window for Tropical Storm Cristina to emerge as the first hurricane of 2020 in the Western Hemisphere is closing.

As of Saturday night, local time, the storm was located well away from land, about 870 miles west of the southern tip of Baja California. It was moving to the west at a speed of 13 mph. Maximum sustained winds dropped to 45 mph. In order for the system to be dubbed a hurricane, maximum sustained winds must reach at least 74 mph. 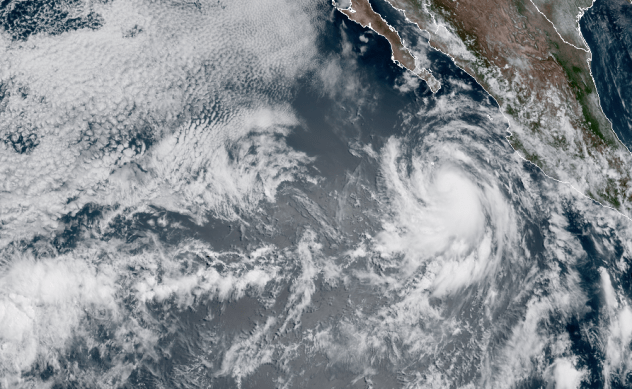 Thus far, there have been three tropical storms and one tropical depression in the Eastern Pacific basin this year.

Meanwhile, the Atlantic has had six tropical storms, with the formation of Tropical Storm Fay on Thursday afternoon.

Neither basin has spawned a hurricane yet, and the potential for Cristina to become the first has now closed as it tracks into cooler water.

"Based on satellite data from midday on Saturday, Cristina is not showing signs of further intensification," said AccuWeather Hurricane Expert Dan Kottlowski.

Cristina, which developed late Monday night, has begun to move into an area of cooler water, closing the window for any further development.

The skill level at predicting peak intensity of hurricanes is still in its infancy, even with the aid of satellites that can peer into the storm without sending in aircraft. There are many variables that can affect sensitive storms, such as hurricanes. 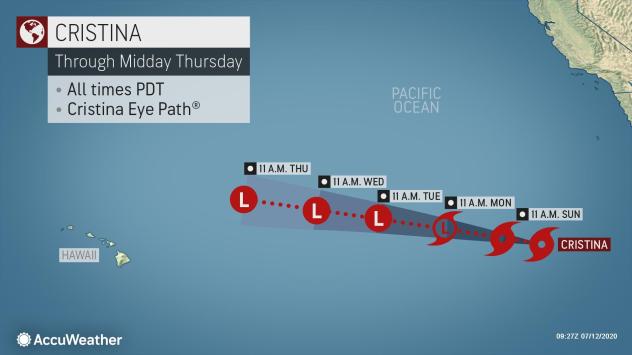 "During the weekend, Cristina is forecast to move into an area that is more hostile for its existence, and it should begin to weaken," Kottlowski said.

This storm is forecast to slowly weaken into a tropical rainstorm into the early week as tracks generally to the west.

This forecast path will keep Cristina out to sea.

Winds generated by Cristina will cause waves to propagate outward from the center. These waves can create rough surf and strong rip currents along the coast of western Mexico, which will lessen as the storm moves away over the weekend.

Forecasters will be monitoring Cristina for potential impacts to Hawaii into the end of the week.

"At this time, moisture from Cristina is forecast to pass north of Hawaii during the latter part of the week," stated Kottlowski. "However, there is potential for this moisture to sink farther south, which could bring showers to the islands."

Once in a while, these features can hold together for thousands of miles or long enough to bring showers, thunderstorms and rough seas to Hawaii.

"The waters east of Hawaii are cooler than waters south and west of Central America, and this tends to cause most tropical systems to weaken and/or fall apart before reaching Hawaii," Kottlowski stated.

"Generally, we start to look for significant impacts by tropical systems on Hawaii around August or so, when waters have warmed up and less wind shear is present," he explained.

As Cristina gradually weakens into the beginning of the week, forecasters will be monitoring the next potential tropical system. 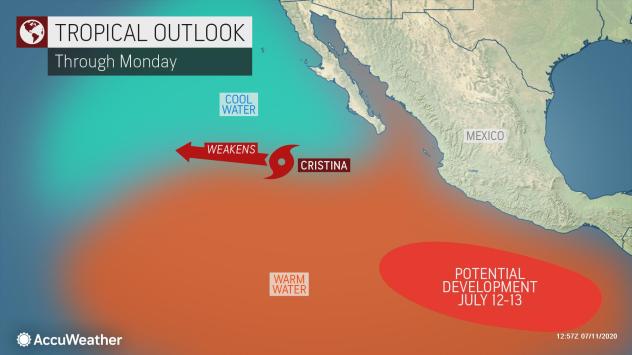 There will be another disturbance that moves offshore from Central America that will also have to be monitored for development into early week.

This disturbance does not appear to be a threat to Central America or Mexico at this time.

During July 2019, Hurricane Barbara passed about 120 miles south of Hawaii on July 8. In August 2019, Erick passed just south of the Big Island on Aug. 4 as a tropical storm, while Flossie passed just north of the islands as a depression on Aug. 6.