The monster storm could bring life-threatening flooding with wind gusts to 185 mph as it passes over the southern islands of Japan.

This week, Typhoon Hinnamnor developed into the most powerful tropical cyclone recorded on Earth so far in 2022. AccuWeather meteorologists warn the typhoon will cause life-threatening flooding, destructive wind gusts as high as 185 mph, and disruptions to the energy and commerce sectors across the southern islands of Japan and parts of South Korea.

As of Thursday afternoon local time, the typhoon had one-minute sustained winds of 120 mph (195 km/h), equivalent to a Category 4 major hurricane on the Saffir-Simpson Hurricane Wind Scale in the Atlantic and East Pacific basins. Wind gusts were estimated to be 172 mph (278 km/h). Satellite imagery showed that the storm had a well-defined eye. 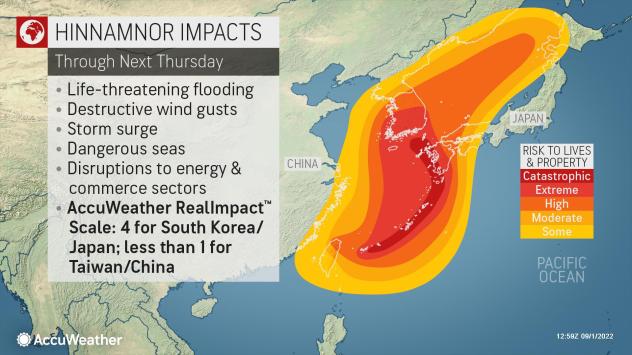 With warm ocean waters and light wind shear in its path, Hinnamnor is expected to maintain its intensity, and even strengthen into Friday as the storm slows to a crawl. AccuWeather meteorologists say that Hinnamnor may strengthen to a Category 5 hurricane on the Saffir-Simpson Hurricane Wind Scale into Friday. 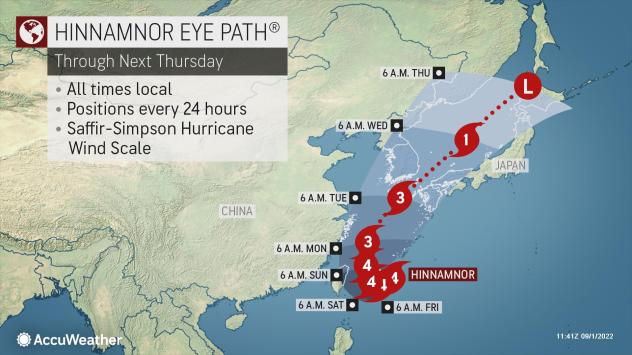 Through the rest of the week, Hinnamnor is likely to take an unusual path.

Widespread rainfall amounts of 8-12 inches (200-300 mm) could be measured across the Ryukyu Islands into southern South Korea and far western Japan with an AccuWeather Local StormMax™ of 30 inches (760mm) of rainfall. Rainfall of that magnitude would lead to substantial flooding, experts say, and localized rainfall amounts could reach higher totals if the typhoon were to stall right over a particular location. 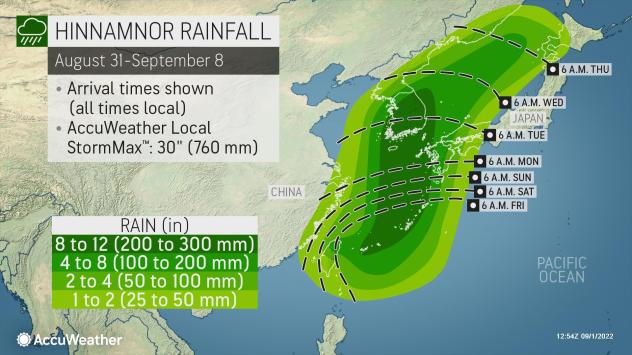 The exact location of Hinnamnor, in relation to the individual Ryukyu Islands, will also determine the extent of the system's wind impacts and possible storm surge. The closer the eye of the storm gets to the small islands, the more extreme the damage could be.

This track will take Hinnamnor in and around the Ryukyu Islands of Japan for several days while maintaining the typhoon’s intensity. This scenario would result in days of drenching rainfall and severe winds for the region that could lead to catastrophic damage and life-threatening conditions. 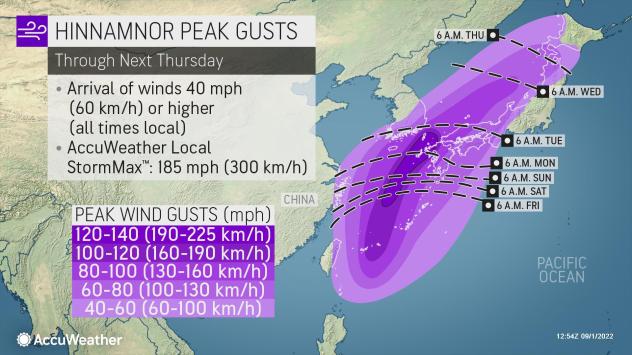 "Hinnamnor is expected to make a turn to the north this weekend and is expected to impact portions of the Korean Peninsula or southwest Japan by early next week," Nicholls said.

Hinnamnor could start to lose some wind intensity once the system is drawn northward into slightly cooler waters. However, even in a weakened state, the storm could still generate an impactful amount of rain for parts of South Korea and Japan, according to AccuWeather meteorologists.